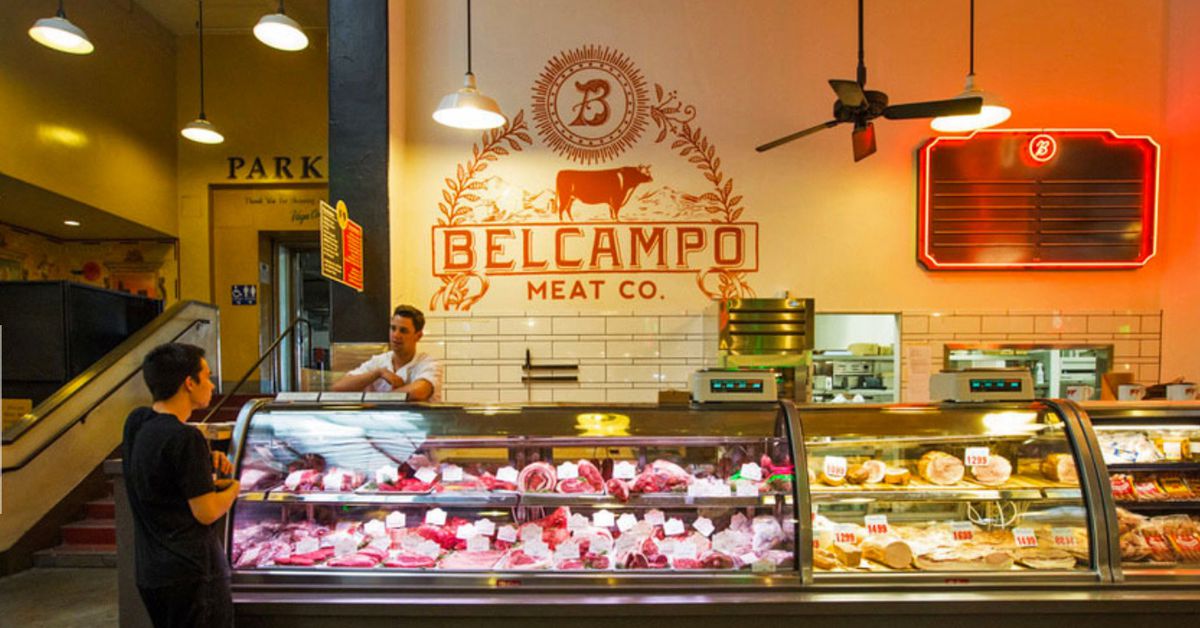 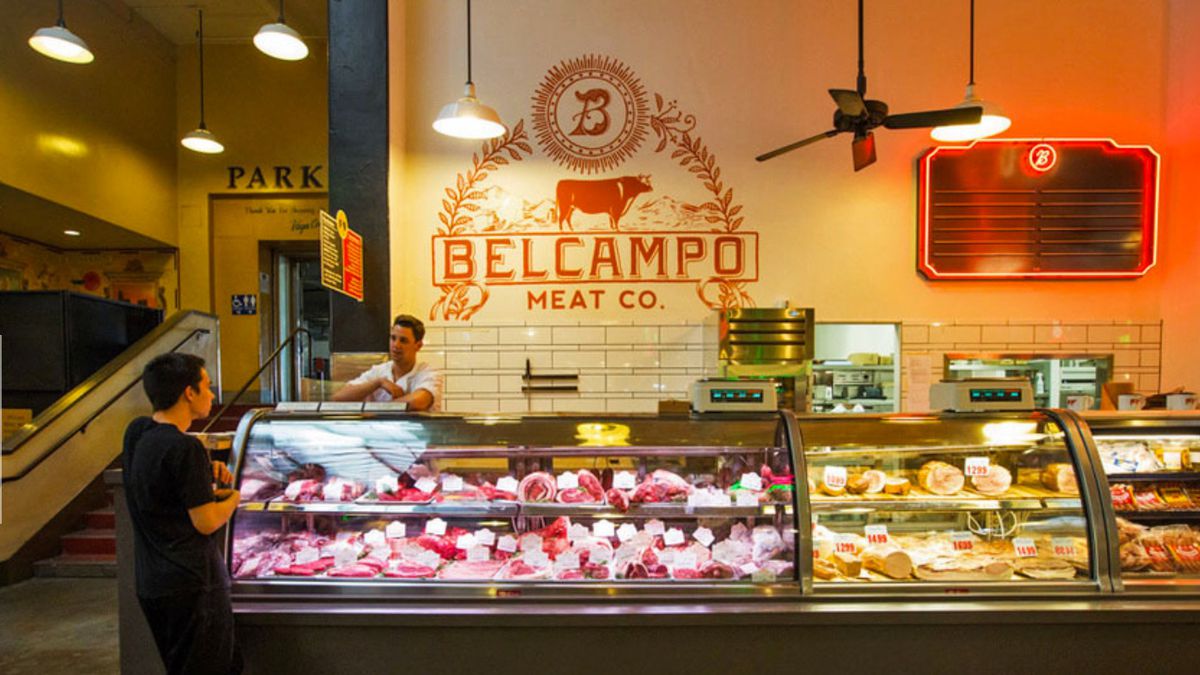 Eater LA speculates what kind of new operator could thrive in the now-empty 1,000-square-foot space

Earlier this month, Belcampo Meat Company announced that it would cease retail and e-commerce operations. The closures come four months after employees revealed that Belcampo — which built its name on selling its own sustainable and humanely raised meats — actually performed a bait-and-switch while charging very high prices for product that wasn’t so sustainable. But now that leaves a key vacancy in one of Los Angeles’s most prestigious food halls: Grand Central Market.

Historically speaking, at least, empty stalls at Grand Central Market have been among the most coveted spaces to open a food business in Los Angeles. Belcampo’s prominent 1,000-square-foot kiosk is massive in comparison to its neighbors, complete with a refrigerated food display case, 12 counter seats, and plenty of prep and storage room in the back. Plus it’s located near the parking garage entrance, giving it ideal foot traffic, especially once offices return to full force.

Grand Central Market owner Adam Daneshgar has some thoughts on the subject. “It goes without saying that Los Angeles is lucky to be home to no shortage of fantastic burger concepts and some amazing butchers with unparalleled farm relationships,” he says. “This is a very exciting opportunity for Grand Central Market to explore all options and ensure that we bring in a best-in-class concept. As one of the city’s truest culinary mixing pots we’re aiming to welcome something that is collaborative, sustainably-focused and downright delicious.”

Eater’s staff weighs in on who should take over the now-vacant space inside LA’s most famous food hall.

The question of who should take over the now-closed Belcampo space at Grand Central Market is really a bigger question: What does the historic Downtown market offer to today’s operator? This isn’t 2017, when the market was a haven for big names and new concepts, two years removed from some serious national dining recognition and at the heart of a so-called Downtown cultural renaissance. There are incredible talents there still to be sure, from Shiku to Fat Flour and DTLA Cheese and Villa Moreliana, but it’s not always easy to survive there, directly competing against one another against a backdrop of half-capacity (or less) office buildings nearby.

What the market needs, I believe, is to turn inward. Look to the heart of Los Angeles, instead of at some flashy names, to help shore up the future of the project for years to come. Ownership was smart to bring in Donut Man for exactly this purpose, so why not add someone like Harold Belle’s, Uncle Darrow’s, or (gasp) Golden Deli to utilize that big space, kitchen, and counter and all? It would be easy, and not incorrect, to just swap in a spot like Huntington Meats or McCall’s for butcher shop basics instead, and that wouldn’t be wrong by any stretch, but why not swing for an LA staple?

Let it be noted: the former Belcampo stand is prime real estate in Grand Central Market (and for visibility in Downtown LA in general). When I think of the market — what it could and should be, what it is — I think of those operators who would benefit from being in one of the most celebrated food landmarks in this city: an end destination for outside visitors; a rite-of-passage for new residents; and a familiar, sepia-around-the-edges sight for lifetime Angelenos.

I would love to see some Afro-Caribbean representation — none better, maybe, than Bridgetown Roti, a roving pop-up that offers exciting and often remixed Bajan classics like codfish cakes, long, airy roti stuffed, burrito-style, with fillings like curry chicken and stewed pumpkin, and flaky patties bursting with tender yam, mango, and coconut; simmered oxtail and peppers; and green curry shrimp. Or maybe a hometown Jamaican restaurant like Little Kingston (located on Slauson in View Park-Windsor Hills), which makes the kind of curry goat and ackee and saltfish that brings me back to grandmother’s ’90s kitchen in (where else) Kingston. You can also buy nostalgic Jamaican snack favorites like Chippie’s banana chips and bun and cheese from behind Little Kingston’s counter; what could be more perfect than that?

The obvious choice — maybe too obvious? — would be another butcher and burger bar, and there’s really only one game in town that makes sense: Standing’s Butchery. Now, this could be a little awkward for founder Jered Standing, who, before venturing out on his own, helped run the GCM Belcampo stall. But he shows real interest in expanding — he already has plans to open a second location in Venice with a bigger emphasis on burgers — and if he can learn to scale operations, a Downtown outpost would make Standing’s Butchery perhaps the dominant force in LA boutique meats. The market, in exchange, would cling to one of its last remaining true ingredient purveyors, making it a viable place to stock up, not just eat.

I originally thought an artisanal butcher like Standing’s or A Cut Above would be a great replacement for the now-vacant Belcampo stall at Grand Central Market, but I think given the neighborhood and what most visitors of the market are looking for, a butcher isn’t that useful.

The market was a place I would frequent every week when I worked in Downtown LA over ten years ago, and I still think of it as a food hall with handy market items for office workers and denizens. Instead of a butcher shop, I’d love to see a full-on rotisserie station with ready-to-eat roast chicken, whirling porchetta, and even shawarma or gyros. Let’s get as many foods slow-cooking on spits as we can get. The cuisine can be diverse and reflective of many different flavors in Los Angeles, and the food will look enticing and delicious for every kind of diner (even vegetables can play a part with vegan shawarma or mushroom kebabs).

Frankly, I’m not sure why there isn’t a kiosk like this already. Imagine Zankou-style rotisserie chicken meals, or porchetta sandwiches, or gyros slathered with tsatziki. I feel like whenever I step into food hall or market-type places, the roasted food appeals to me the most. I’m already salivating.

Grand Central Market is lacking one thing that could make a difference for grown folks: a bar. The former Belcampo space has six attached stools to its counter, so any bar operator could easily convert it into something special that fits the space. The rear preparation space is fairly large, so a food operator could be an ideal partner to go along with those drinks; a win-win-win, if you include drinkers/diners, and the two operators. My money would be on Little Tokyo’s Mermaid team, the Lono crew, or Kahuna Tiki; any of these LA spots could easily turn the stall into a festive tiki-themed oasis.

Another option is to draw from LA food that’s missing from the GCM lineup. Soul food is always wonderful, with local favorites like Anaheim’s Georgia’s or Dulan’s Soul Food. Slurping noodles at the bar sounds completely ideal with LA or OC’s plentiful Vietnamese offerings, too. Or, perhaps one of South LA’s flavorful food trucks like All Flavor No Grease or Bleu Kitchen taking up shop and turning it into a vibe.