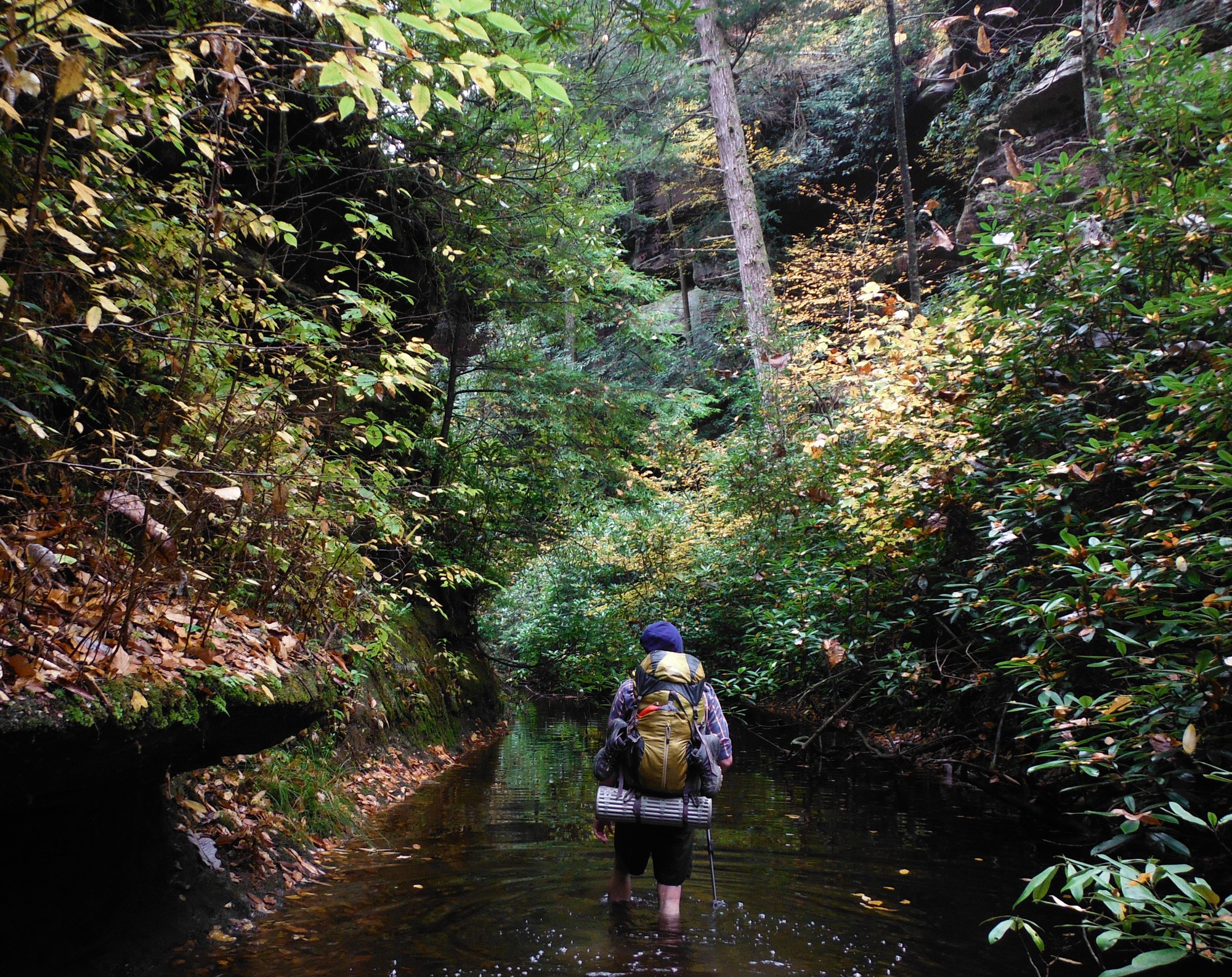 With the abundance of attention on Fastest Known Times, Calendar Year Triple Crowns, and hiking on trails with catchy acronyms, it seems like there’s a mold that many new backpackers feel compelled to try and fit into. There’s an undeniable undercurrent that drags most backpackers into pursuing thru-hikes, the lightest and most expensive gear, and life list destinations rather than prioritizing doing the actual activity (backpacking) as much as possible. And if they’re not doing those things, there’s often a disconcerting feeling of not being a real backpacker. 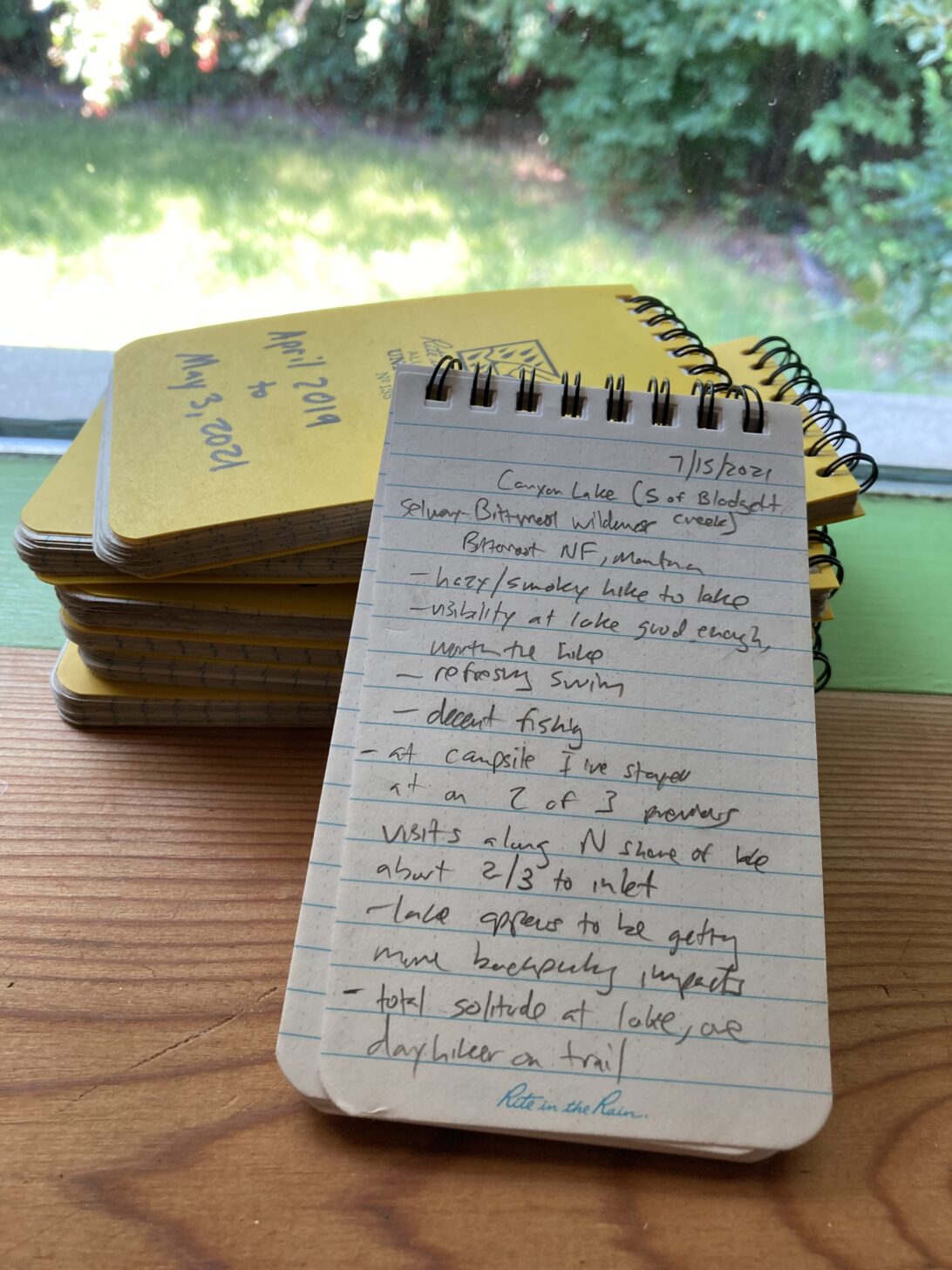 A decade of trips are accounted for in these small notebooks. I look forward to looking back on the most recent entry in a few years.

When I first started backpacking in earnest in 2007 as a college sophomore in central Kentucky – with gear cobbled together from my brief time in Boy Scouts and an oh-so-svelte Kelty external frame pack that weighed around 40 lbs – the Appalachian Trail came up frequently in conversations. People asked if I had plans to hike it or if I was training for it and my initial responses were somewhere along the lines of “I just started backpacking and am just trying to figure things out, but sure – seems like a cool thing to do!” I read up on the AT and was simultaneously intrigued and intimidated. If nothing else, I knew I was absolutely hooked on backpacking.

At the end of 2007, I made the only New Year’s resolutions I’ve ever kept – I made it a goal to spend 10% of the next year on backpacking trips. That would add up to 37 nights. For some reason, I didn’t think about counting the day I hiked out as part of the total, so I ended up with nights as the metric to use. It wasn’t an overly ambitious goal for a full-time college student with a part-time job, but it was a high enough bar to have to plan and prioritize around various academic, work, and social obligations.

Although I only got to 28 nights that first year (2008), the next two years I hit 37 exactly. I diligently logged my nights in Rite-in-the-Rain notebooks which I still take one out on every trip – ultralight purity be damned. I hiked in southern sun and humidity, cold winter rains and snow, and spectacularly beautiful spring and fall days. Flipping back through journal entries from over a decade ago and reading the few lines I scribbled in my tent at each campsite, I can still see the scenery vividly and remember the joy of spending a night in the woods. 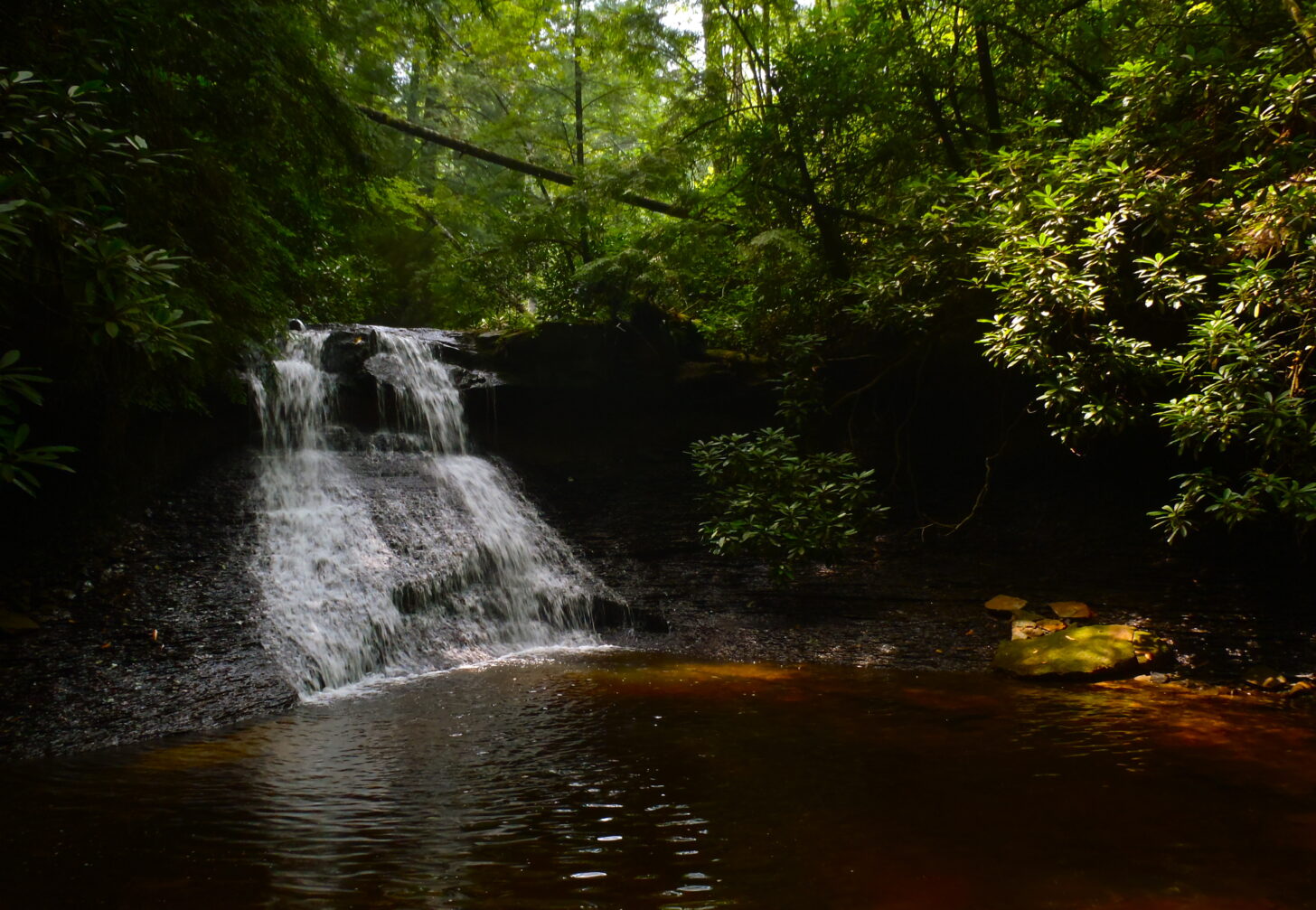 I find it more rewarding to crash through rhododendron and walk through creeks to find hidden gems like this than to drive a few hours to the Appalachian Trail to crank out miles like a “normal” backpacker should, at least according to most outdoor media.

As my skills grew, so did my affinity for the Cumberland Plateau region where I spent most of my time backpacking. Filled with tucked-away arches, waterfalls, overlooks, and thousands of miles of sandstone cliffs, this landscape was a veritable playground for a curious backpacker like myself. I quickly learned that cranking out the miles was less interesting than exploring off-trail nooks and crannies for hidden waterfalls, historical relics, or the rare petroglyph. Part of this probably had to do with my heavy gear being a burden, part of it probably had to do with a relative lack of longer trail infrastructure (which has fortunately changed for the better, with the Sheltowee Trace offering a great longer thru-hike for those so inclined), and part of it certainly had to do with my own inclination towards the obscure and esoteric. 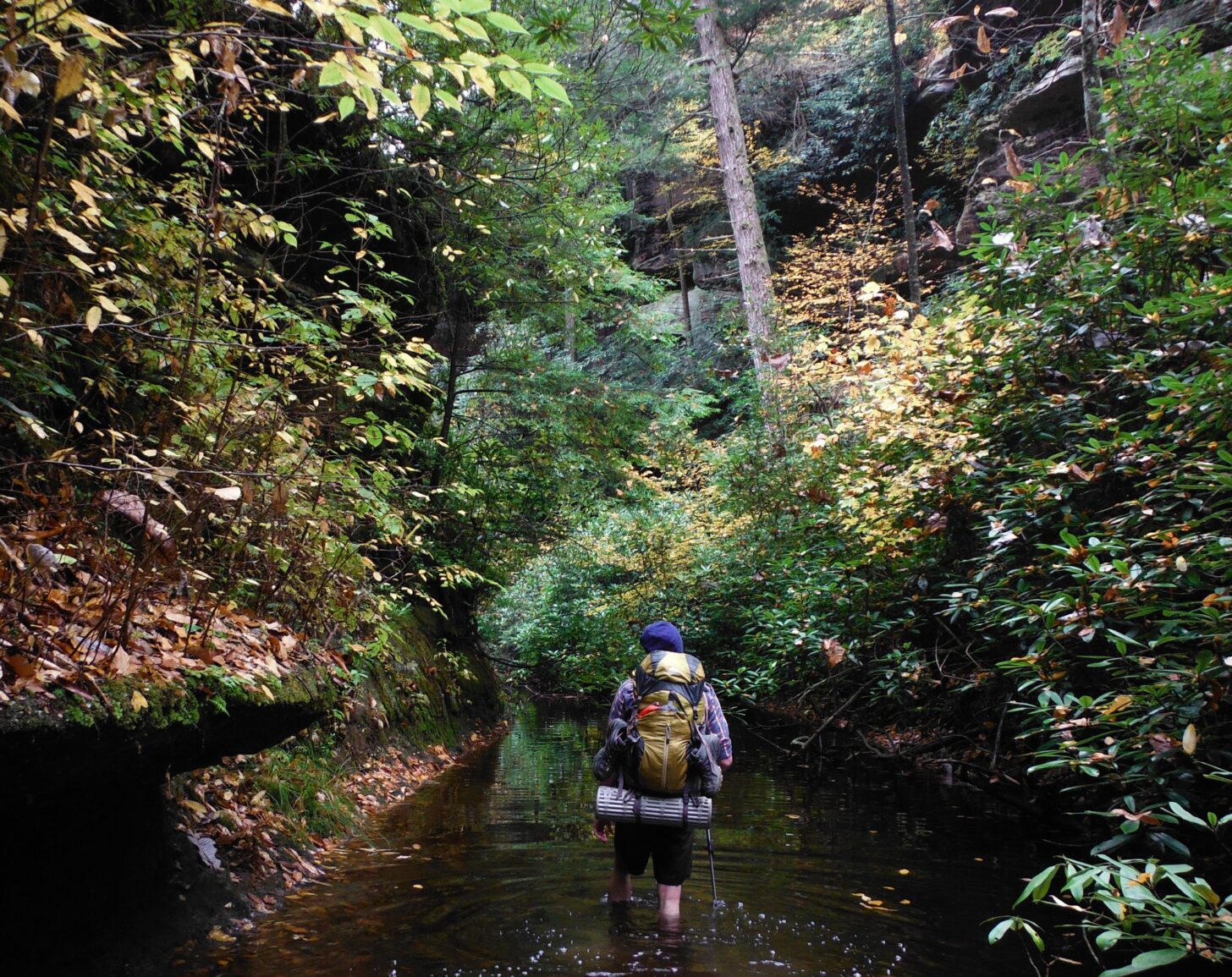 Wading through creeks in the southeast rather than limiting myself to a trail allowed me to stumble upon unnamed waterfalls, idyllic swimming holes, and even the remnants of Prohibition-era moonshine stills.

Within a year or two of frequent backpacking, when people asked about my interest or ambition for the Appalachian Trail my answers became more nuanced. I’d mention that I was having so much fun exploring the Cumberland Plateau as thoroughly as possible that I hadn’t really given much thought to heading somewhere else to hike. If the conversations drifted more philosophical, I might pontificate about how I was finding traveling near and deep as rewarding as I imagined traveling far and wide might be. The linear aspect of a long trail had limited appeal to me for some reason – I found it more interesting to spend my limited time off exploring an area of a dozen square miles; hiking up as many streams as possible and exploring along the cliffs as opposed to hopping on a defined path and just walking for 100 miles straight. 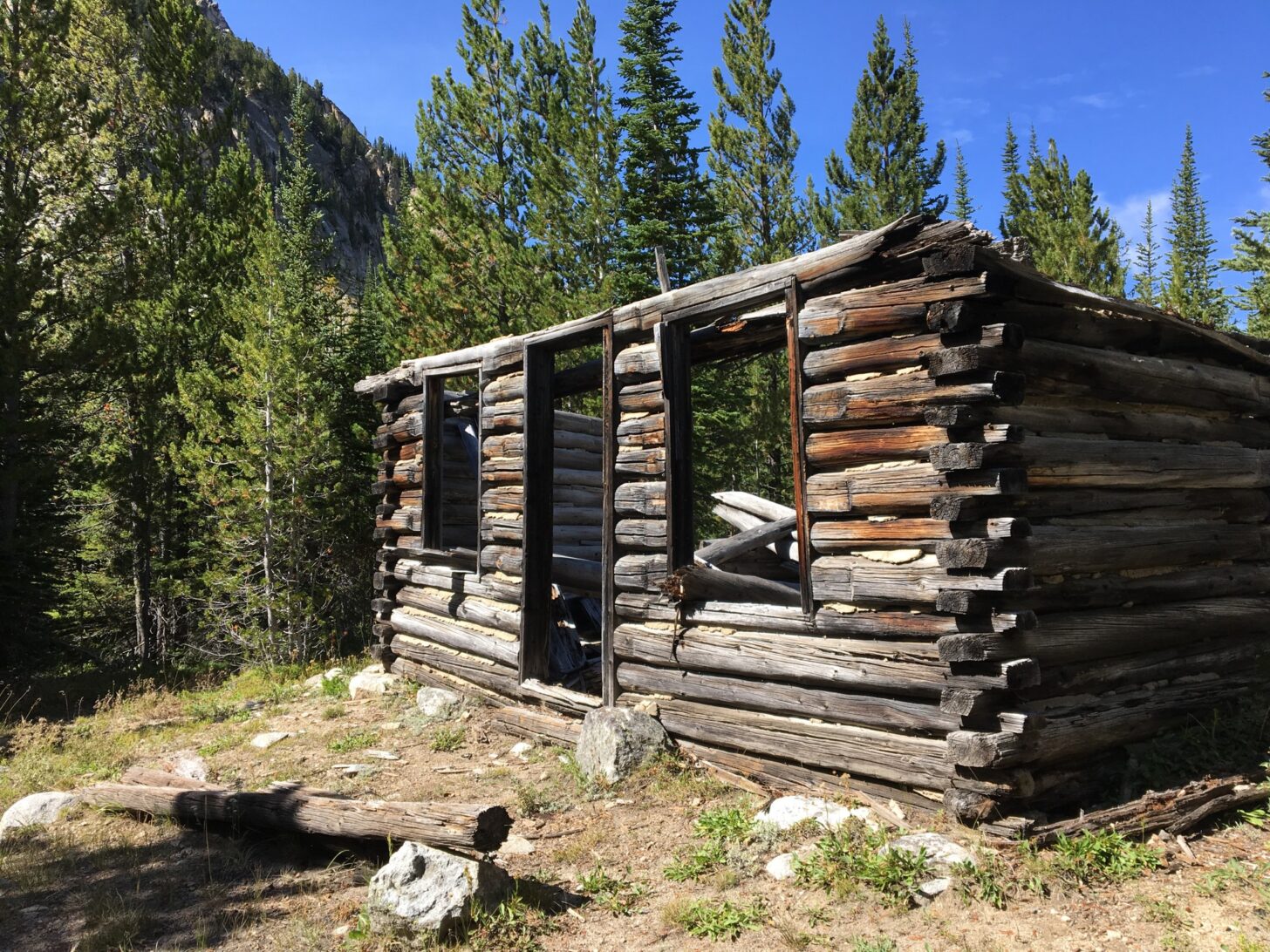 Abandoned miner’s cabins and unnamed lakes interest me just as much as hiking bucket list trips in Glacier or Yellowstone.

When I moved to Montana in 2014, I brought a similar attitude of exploration with me. Although there are more trails than I could hike in a lifetime and putting together a 30-50 mile weekend hike is ridiculously easy, and I now have the gear and fitness to make that an enjoyable experience rather than a tribulation, I still find myself drawn frequently off the trails to visit unnamed lakes, alpine basins, or explore old miner’s cabins rather than hike 20-mile days.

In 2019, a decade after the first year of trying to spend 10% of each year on backpacking trips, I hit the milestone I’d been hoping for. After ten years of ten of the project, I’d spent slightly over one cumulative year on backpacking trips. I’d backpacked in 11 states during that time and seen sunrises, sunsets, landscapes, wildlife, and weather events that have created profound memories. Looking back, it wasn’t even where I spent the time that mattered so much to me – it was just the fact that I was spending the time outdoors at all. 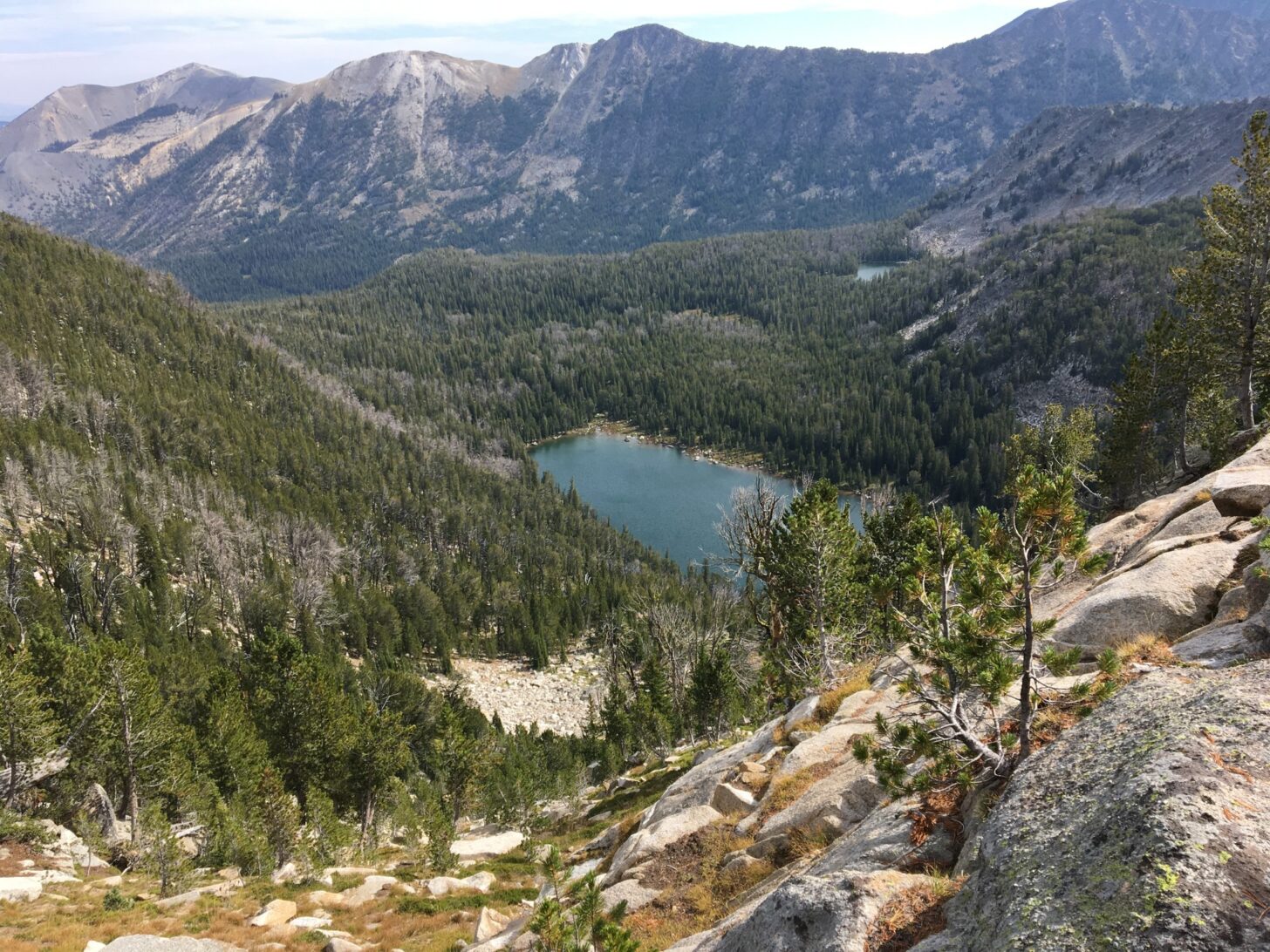 Cross-country travel to unnamed lakes is one of my favorite ways to spend the time I tithe to backpacking.

Many people, myself included, feel a spiritual and soulful connection with something when spending time outdoors. I’ll leave to better writers and theologians to describe exactly what that something might be, but I recognized early on that nature provided me with a gift and peace that warranted prioritizing. Instead of tithing with money, I tithed with my time. And I’m undoubtedly much richer for having done so.