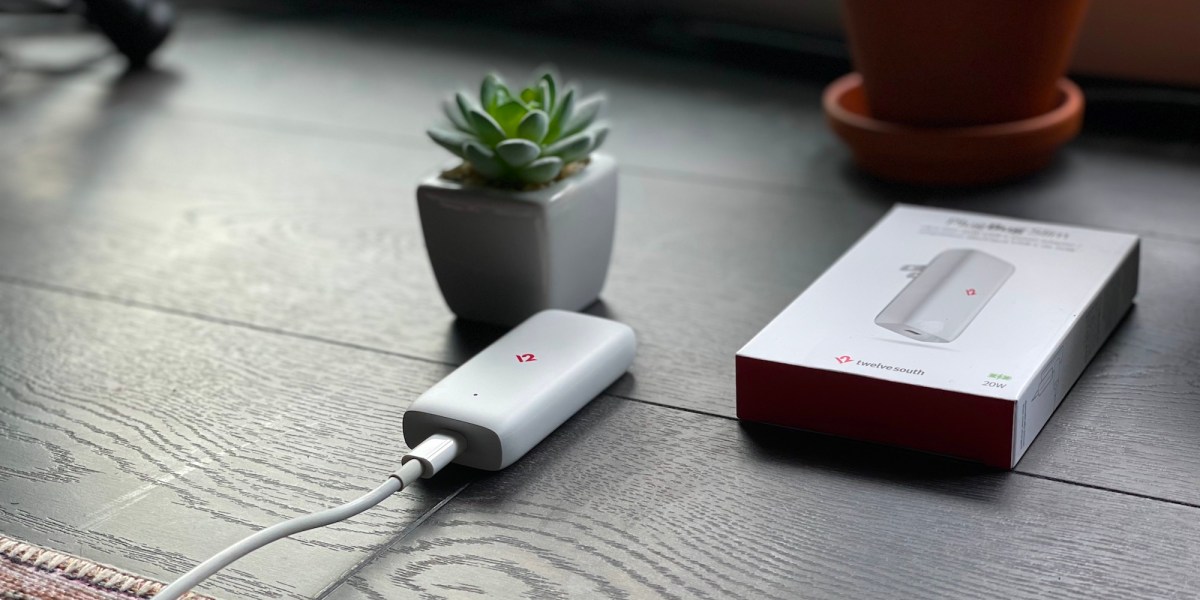 Twelve South has now unleashed its new PlugBug Slim – the latest iteration of its lauded wall charger in a particularly slimline form-factor. Featuring the brand’s usual minimalist approach with clean lines and light “12” branding, the thin PD wall outlet adapter sports USB-C connectivity, a fold-out plug, and can push 20-watts of juice to anything that can handle it. After going hands-on with the new Twelve South PlugBug Slim ahead of today’s official launch, we are now ready to give our impressions of the latest 20-watt PD adaptor. Head below for a closer look.

Described as the “the first ultra-thin USB-C wall charger for iPhone, iPad, AirPods and HomePods,” it measures out at 17mm in thickness to make getting in behind furniture and the like as easy as possible. Along the bottom you’ll find a standard USB-C port with a white LED charge indicator along the front just below the small TwelveSouth logo.

The body features a flat stark-white paint job with a lighter gray color block along the backside where the foldable prongs are housed. The whole thing has a sort of high-quality plastic feel to it that is about as robust in your hands as something with this construction process could have. I certainly wasn’t worried about chucking it my bag when heading out the door in a hurry, and the whole thing is more than slim enough to fit in most tech caddies and cable folios/organizers.

The slim, elongated shape means it will cover up both outlets if its plugged into the top outlet on a typical dual wall receptacle, unless you stick it in there upside down. But the rounded rectangular shape blends in wonderfully with the white receptacles otherwise, it’ll just make more sense to plug it into the bottom jack when possible so as to not cover up the other – although at times covering up the other jack in receptacles where it wasn’t needed does leave a clean and tidy look due to the trim form-factor and colorway here. Maybe even nicer than without it and again, sometimes getting this thing in there upside down will be even more practical, especially if the connected cable is stretching up to an end table for your charger.

“PlugBug Slim has 20 watts of power to charge your iOS devices at full speed” with a 5V=3A, 9V=2.22A output. Compatible with all Apple USB devices, as well as others with the modern data/power delivery standard, in my testing it works just as expected with a speedy direct power delivery to anything I can connect to it. This GaN powered wall charger has been a great option for a HomePod mini I have plugged into an outlet tucked tightly behind some furniture pieces as well as for wireless Qi pads used to refresh my iPhone 12 and AirPods on a daily basis.

I can’t help but think some sort of rotatable prongs on the back would have made the PlugBug Slim even more practical and further magnify its ability to blend in seamlessly with typical plug receptacles while still offering users the most versatile and slim option possible. That way you can use it to sneak into receptacles tucked away behind furniture that only has limited space. But this could have made the entire thing a little less thin and streamlined as well as likely driving the cost much higher – and you can just plug it in upside down in these situations as we motioned earlier.

The same goes for the device’s lack of support for the swathe of international power standards previous-generation PlugBugs shipped with – this time around it’s just the typical US/Canada option (and the like).

Personally speaking, I think I would have also preferred an even stealthier approach to the branding here. Considering the PlugBug Slim’s ability to blend in seamlessly with standard outlet receptacles, a sort of white-on-white or white embossed perspective might have been an even more elegant look here – something akin to the gorgeous embossed logo found on Twelve South’s metal Forté MagSafe stand we took a hands-on look at back in April. This is only really going to matter when connected to an entirely visible outlet, but would have been a nice touch for me regardless.

Apple’s 20W USB-C Power Adapter costs $19 Prime shipped (or less on Amazon) to your door with the same 20-watt power delivery and an arguably even cleaner look to some. But it’s also significantly thicker, with no foldable prongs, and stands out much more when sitting idle in the outlet receptacle.

Twelve South’s new PlugBug Slim is a compelling option for folks that value the travel-ready prongs and 17mm form-factor/design. It is a wonderful addition to any on-the-go tech accessory folio, slides right into your pant’s pocket or small slots in your backpack far easier than the chunky cube-like options, and comes with all of that without breaking the bank all that much more than other big brand solutions.

Twelve South’s PlugBug Slim is available now for $24.99 at Amazon and direct.