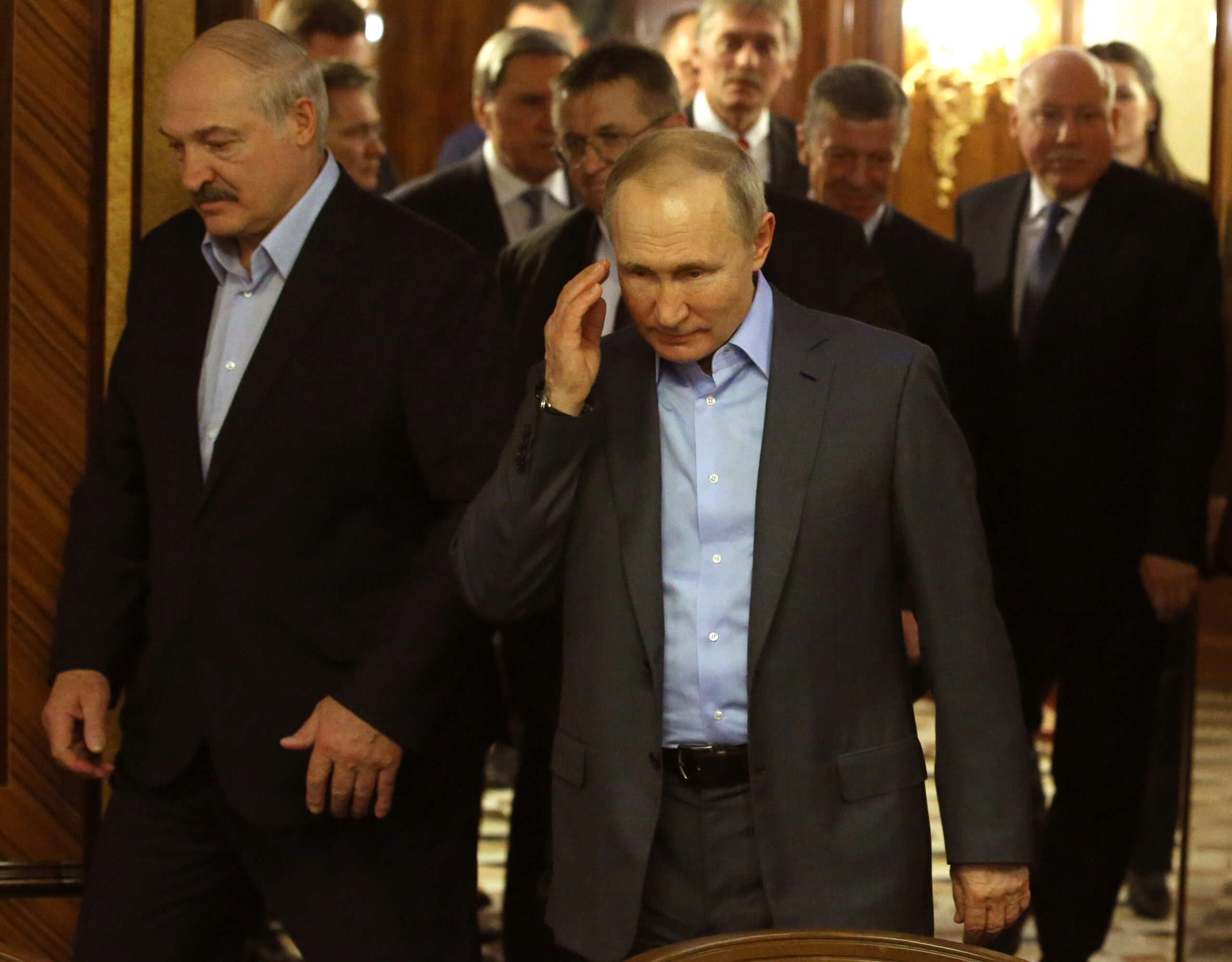 Trouble On The Belarus-Poland Border: What You Need To Know About The Migrant Crisis Manufactured By Belarus’ Leader

This article is part of TPM Cafe, TPM’s home for opinion and news analysis. It first appeared at The Conversation.

Using migrants as pawns is perhaps nothing new. But rarely do you have a situation in which one country encourages a migrant crisis on its own border for nakedly geopolitical reasons.

That is what appears to be happening at the Poland-Belarus border, where violence has broken out between Polish border guards and Middle Eastern migrants who traveled there via Belarus, and who are set on reaching the European Union. Meanwhile, there is growing concern over those camped out in freezing conditions.

Get TPM in your inbox, twice weekly.

Your subscription could not be saved. Please try again.

Your subscription has been successful.

The Conversation asked Tatsiana Kulakevich, a specialist on Eastern European politics at the University of South Florida, to break down how the migrant crisis came about and what the fallout might be.

What is going on at the Belarus-Polish border?

Images of migrants – many of them families with children – camped at the Belarus-Poland border, trying to force their way into Poland and being deterred by water hoses, have gained international attention in recent days. On Nov. 18, it was reported that many of the migrants were being moved back from the border, to a government-run facility. But it is not clear what the long-term plan is for those who have gathered in Belarus with no intention of returning to their countries of origin.

The crisis has been months in the making.

The influx of migrants to Belarus from the Middle East began in early summer 2021. But they didn’t come to stay in Belarus. Their ultimate destination was Western Europe. Now, there are thousands of people spending nights near the barbed-wire fence separating Belarus from EU member Poland.

The situation took a dramatic turn on Nov. 8 when thousands of new arrivals showed up at the Belarus-Poland border and tried to break through makeshift fences on the border, with the goal to crossing into the European Union.

This migrant crisis has a twist – it appears to be encouraged by Alexander Lukashenko, Belarus’ leader, who’s at the center of the border conflict as part of a ploy to flood the EU members that border Belarus – Poland, Lithuania and Latvia – with large numbers of migrants in retaliation for a series of sanctions against the Lukashenko government.

Belavia, the Belarus state airline, increased the number of flights from the Middle East – including Iraq, Lebanon and Syria – in recent months to enable more migrants to come. For example, flightradar24.com, which monitors global air traffic, reported 27 flights from Beirut to Minsk from August to November 2021, compared to only five in the whole of 2020.

And according to some of the migrants from Iraq, Belarusian officials arranged for their stay in hotels and helped them reach the border with Poland. Belarusian border guards, it has been reported, led migrants to a gap which had been cut in the border fence, allowing them to bypass the official checkpoint. Meanwhile, other migrants say they were provided axes and wire cutters by Belarusian border guards to cut through fences.

In response, the Polish government has closed its border with Belarus. What is the background to the crisis?

The actions of the Belarusian government appear to be in retaliation for economic sanctions imposed by the international community in response to Lukashenko’s increasingly autocratic rule.

In August 2020, Belarusian authorities cracked down on protesters demanding the resignation of Lukashenko following a disputed – many say rigged – election. Opposition leaders say as many as 30,000 people were detained in efforts to suppress demonstrations.

The United States and the European Union refused to recognize Lukashenko’s legitimacy as president and, in September 2020, imposed a series of sanctions targeting Belarusian officials with asset freezes and travel bans.

The EU followed that up with two further rounds of sanctions in November and December of that year.

A fourth packet of EU sanctions came after Belarus intercepted a Ryanair flight carrying Raman Pratasevich, an opposition journalist and a former editor-in-chief of the Telegram Nexta news channel, along with 132 other passengers in May 2021. Belarusian authorities arrested the journalist and his partner before allowing the plane to continue to its destination. In June 2021, Pratasevich was moved under house arrest.

Lukashenko has sought to suppress any signs of protest activities. Since the beginning of the presidential election campaign in May 2020, the number of political prisoners in Belarus has increased from three to 868 as of November 18, 2021.

Where are these refugees coming from, and why?

The asylum seekers are mostly Kurds from Iraq, fleeing persecution and poverty. But there are also migrants from Lebanon, Syria and Afghanistan. They are trying to cross into EU member states Lithuania, Latvia and Poland.

Previously, Middle Eastern migrants mainly crossed the Turkish border with the EU, and from Africa via the Mediterranean Sea.

These crossings can be treacherous, so the prospect of flying straight into Belarus instead of risking drowning proved an attractive option.

But now thousands are stuck or hiding along the Belarusian-Polish border, facing freezing temperatures. The cold and lack of humanitarian support have caused multiple cases of hypothermia and at least nine deaths.

What chances are there for a resolution to the crisis?

Lukashenko is using the border issues as leverage against the EU. He wants the lifting or easing of existing sanctions and recognition that he is the legitimate ruler of Belarus.

The EU, meanwhile, has announced plans for more sanctions against Belarus. But it has also held out the possibility of negotiations on resolving the migration crisis.

Lukashenko and Germany’s acting Chancellor, Angela Merkel, have held two phone calls since the escalation of the border crisis on Nov. 8. They represented Lukashenko’s first conversations with a European leader since the 2020 presidential election.

The phone calls happened after Russian President Vladimir Putin, an ally of Lukashenko and the Belarusian regime, called on EU leaders to talk directly with Lukashenko.

What could be the fallout?

The EU, the U.S. and NATO have strongly condemned Lukashenko’s ushering migrants to the EU border. The EU recently announced plans for a fifth round of sanctions against Belarus, targeting airlines, travel agencies and individuals believed to be facilitating the push of migrants.

Lukashenko, in turn, has threatened to retaliate against further sanctions, including cutting off natural gas transit from Russia to EU countries through Belarus.

Setting the stage for this, on Nov. 17, Belarus restricted the pumping of oil through the Druzhba pipeline to Poland, saying it was the result of “unscheduled repair work” that would last approximately three days.

But cutting off the gas supply to Europe would likely only be a short-term measure for Lukashenko. Anything more than a few days would go against Russia’s interests and could cause a rift with Putin – and keeping Putin on his side is crucial for Lukashenko.

Moscow has provided a financial lifeline to Lukashenko’s regime and promised to protect Belarus from external military threats. As long as Lukashenko retains Putin’s support, he will be able to continue to suppress dissent internally and ignore international pressure to respect borders.

Tatsiana Kulakevich is an assistant professor of Instruction at SIGS and a research fellow of the affiliate faculty at the Institute on Russia at the University of South Florida.

This article is republished from The Conversation under a Creative Commons license. Read the original article.