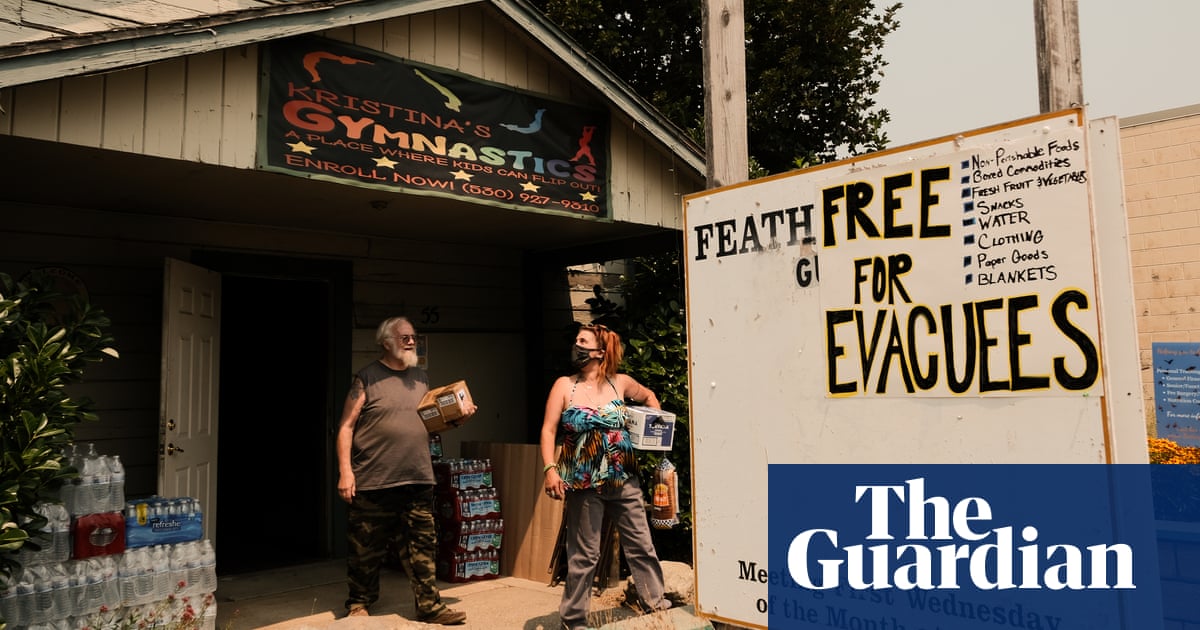 The mountain town sheltering Dixie fire refugees: ‘Each year we hold our breath’

Quincy has become accustomed to hosting evacuees as wildfires worsen. Now some residents wonder if it’s time to leave

By the time the Safeway parking lot in Quincy, California, began to fill with emergency vehicles and RVs carrying people planning to spend the night, Megan Bray had already stocked the shelves with extra Gatorade.

It wasn’t the first time a wildfire had descended on this northern California region and threatened the towns scattered through the forested mountainsides. Bray, the store director, knew first responders and anxious evacuees would need the extra electrolytes.

“This isn’t our first fire season so we are prepped and ready to go,” Bray said on Saturday. “Every year we are just holding our breath for when it’s going to start. And this year it started way sooner than we expected.”

Jack Romero shares her cot with her dog Rascal at a Dixie fire evacuation center run by the Red Cross in Quincy. Photograph: Fred Greaves/Reuters

Marva Stewart, who has been evacuated from her home in Twain, California, talks Kevin Coster, a Red Cross volunteer, at a Dixie fire evacuation center in Quincy. Photograph: Fred Greaves/Reuters

Quincy is just south of the edges of the Dixie fire, the largest wildfire raging through California. Unlike the nearby town of Greenville, which was consumed by Dixie’s fast-moving flames, it was spared the onslaught experienced by its neighbors when the fire surged to the north and the east.

By Tuesday morning, the Dixie fire had swelled to more than 604,500 acres and was just 31% contained. Amid windy weather and with dry, hot conditions in the forecast, authorities issued new evacuation orders across the region. The flames are now approaching Susanville, home to 18,000 people and another town that, like Quincy, was considered a safe zone to house evacuees.

Nestled into the Sierra Nevada range, Quincy is about as picturesque as they come. With slightly fewer than 2,000 residents, the town each year welcomes thousands of tourists looking for a bite on its downtown drag after backpacking or en route to the popular High Sierra Music Festival.

Now, the recreation destination has become a refuge. The Plumas county fairgrounds, scheduled to host the Homegrown Americana Festival on Labor Day weekend, is instead housing those who lost homes and fire crews working to contain the flames.

Rather than merch tables selling memorabilia from a weekend of music, vendors stationed near the fairgrounds are hawking Dixie fire commemoration T-shirts complete with big bold letters that read: “Largest single fire in California history.”

A vendor set up a tent near a fire camp and evacuation center in Quincy, California selling shirts commemorating the Dixie fire. Photograph: Gabrielle Canon/The Guardian

Quincy is safe and beyond the fire line. But residents are still shaken. Smoke has filled the skies in summer or autumn for the last three years and the foreboding glow of yet another dangerous fire has hit home. Many in the tight-knit community have close friends who live in the areas that weren’t as lucky.

“It has been heartbreaking,” Bray said, noting that residents across many of these towns know one another. People have been congregating in her store, which posts the latest fire information on a bulletin at the entrance, sharing stories of loss. “People have been living here for generations and suddenly they’re just having nothing,” she said. “It’s surreal.”

A few miles up the road, the Pine Hill Motel is fully booked with people who lost their homes in the fire and those working on the incident. The motel’s owner, Sonny Madarang, said he has had to cancel bookings for the fair, but for the last few years most of his business has been catering to crews rather than tourists.

The town of Greenville, California, has been among the hardest hit by the Dixie fire, and most of the historic downtown area has been burned to the ground. Photograph: Gabrielle Canon/The Guardian

“Our clientele are people coming to college and worker guys – firefighters, dispatchers. We have been really busy for a couple years because of those guys,” he said.

Madarang said the hotel was trying as best it could to help out the fire refugees. It was hard to stomach the losses, he added.

“I feel sorry for those guys,” he said. “I don’t see why they couldn’t stop the fires in Greenville, Canyon Dam and all those places.” He’s hoping the catastrophic fires have at least protected Quincy for a while. “We got burned all the way around us,” he said. “Now we got pretty much all that fuel burned off – but I guess there’s still a lot of fuel.”

I spent the weekend amidst the wreckage where the Dixie Fire had already come and gone. This is Greenville, California. Somehow, a single lawn evaded scorching but the small downtown area is decimated. pic.twitter.com/MIvUgVkBWM

Madarang and his family moved to the mountain town decades ago from Santa Rosa looking for a different pace of life. He’s not ready to leave yet. “I like it here because you don’t have to rush around,” he said. “The only thing is the fires.”

Connor Caiazzo, 20, who works at local restaurant, Jeffrey’s Pub Grub, was born and raised in Quincy and said that a lot of what made it special was also lost during fire season. The dozens of Pacific Crest Trail hikers who typically stop in for food during the summer haven’t come through and the tourism that supports the town has had to slow. “There’s a lot of outdoor activity,” he said. “So when you’ve got something that affects pretty much the only thing there is to do around here, it sucks.”

The Dixie fire has consumed hundreds of thousands of acres of forested mountainsides, including large swaths of land in Plumas National Forest. Photograph: Gabrielle Canon/The Guardian

It’s also been scary. The losses experienced by nearby communities had also been felt in Quincy, he said. “Seeing a town like Greenville go up in flames, a town with so much history – it is just scary for a lot of people.”

Ally Blesse, 32, has also lived in the town for her whole life, but she and her family now are thinking about leaving. “It’s been crazy and really hard to deal with,” she said. “Everybody is panicking.” But, she said, it had been heartening to see the community rally around its neighbors. She works at the Quincy Natural Foods Co-Op, which has been distributing donated food to evacuees.

“We are a very tight-knit community,” she said. “It’s been incredible to see the outreach and the overflowing love. People are learning to be more gentle and calm.” But it’s not enough to keep her there. “My family and I have talked about giving it one more summer and then packing up and getting out.”

We will be in touch to remind you to contribute. Look out for a message in your inbox in October 2021. If you have any questions about contributing, please contact us.