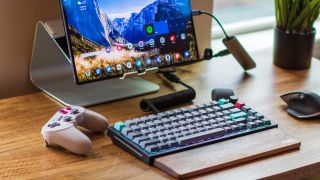 If you're one of the madlads that sprung for Samsung's biggest tablet, the Galaxy Tab S8 Ultra, then you likely are the type of person who wants to get some work done at some point. Whether that's checking and responding to emails, or maybe just being able to have a laptop-sized display to remote access your PC while you're away from home. No matter the reason, it's likely that you also have considered picking up Samsung's Book Cover Keyboard to go with it.

In our review of the Galaxy Tab S8 Ultra, I made a few comments about this keyboard and some of the frustrations that you should expect. Considering the sheer size of this tablet, pairing it with a keyboard is almost a must, as it can be a bit too cumbersome to hold and use like you would with something like the Galaxy Tab S8 or even the Tab S8 Plus. But then there's the whole DeX aspect of these tablets, which allows you to ditch the comically unoptimized Android interface for something that is actually useful.

In my time with this tablet and the accompanying Book Cover Keyboard, I came to the realization that Samsung is doing everything it can to emulate Apple in some form or fashion. No matter what iPad you want to get, other than the new iPad Mini, Apple offers a keyboard case to pair with the iPad of your choice. Samsung is going down the same route, but the Book Cover Keyboard for the Galaxy Tab S8 Ultra is slightly different compared to the Tab S8 and S8 Plus.

With those smaller tablets, Samsung opted for a more traditional approach to the keyboard as you can just fold the case back, prop up the tablet, and have instant access to the keyboard. But with the Ultra, apparently this wasn't an option, as Samsung instead opted for a Microsoft Surface approach with the included back cover that includes a built-in adjustable kickstand, while the tablet itself "docks" into the detachable keyboard.

RECOMMENDED VIDEOS FOR YOU...

While I've learned over the years that this style isn't really for me, I was hoping that the keyboard itself would make up for the stand. In some ways it has, and others it hasn't.

As someone who spends most of their day typing away on different computers or tablets, it's important to have a keyboard that is comfortable to type on. It's why I switch between the chiclet-style keys from Apple's Magic Keyboard and one of the many mechanical keyboards that I have in my arsenal. The Tab S8 Ultra is closer to the Magic Keyboard with its chiclet-style, but still provides enough travel and feedback that I don't feel like I'm typing on a flat piece of plastic. Every keystroke is properly registered and the keys are spaced in such a way that I don't feel like I have to reach too far to hit keys like delete or escape.

Part of the cost associated with the Book Cover Keyboard comes in because you are provided with the back cover case with the adjustable stand. While I mentioned that I'm not a big fan of the Surface kickstand, it's not all that bad, and does fold far back enough to keep the Tab S8 Ultra propped up at slight angle if I'm using the tablet to take some notes.

In true Samsung fashion, the company has implemented a few different shortcuts that make it easy to know what you can do with the keyboard without needing to rely on the touchscreen or trackpad. Simply pressing Cmd + / in any app will surface the shortcuts that are available for whatever app you are currently using. Then, there are the APP shortcuts in the function row that can be re-programmed to open any app of your choosing. This makes it extremely easy to launch your most-used or favorite apps, which is definitely a nice touch.

Another extremely useful feature of the Book Cover Keyboard is the built-in backlight. It can even be adjusted with a combination of Fn + F12, making it perfect for those late nights where you don't want to turn on a bunch of lights but need to still be able to see the keys.

The biggest reason why I like the keyboard is because of the typing experience and the fact that I can go from tablet mode to DeX mode just by connecting the keyboard. There's a setting that enables DeX as soon as the keyboard connects to the tablet, so I can get right to work without needing to fiddle with the settings or even dive into the Quick Settings toggles.

As someone who is constantly trying to tweak their work-life balance, especially working from home, there are times when I just want to sit on my couch and get some writing done in the living room. It was immediately apparent that this keyboard is not meant for that. You can tell right out of the box, but it's just extremely flimsy and can easily be contorted even without having your wrists resting on the palm rests and the tablet propped up on your legs.

Typing isn't so much the problem, as it's definitely a bit cumbersome at times, but instead it's the trackpad. Oh, the trackpad. If there's any flex in the keyboard at all, get ready for misclicks when trying to use the Tab S8 Ultra on anything other than a flat surface. I was really hoping that I would be able to leave my MacBook Pro in its dock and use the Tab S8 Ultra everywhere else away from my desk but it's just not sturdy enough.

As I was working on this piece, the trackpad also just stopped responding for a few seconds. I haven't been able to figure out exactly why this happens from time to time, but it's extremely frustrating to say the least. And there's the whole "delay" that you have to deal with when waking up the keyboard if it goes into sleep mode to preserve battery life. Press any of the keys or tap on the trackpad and there's a delay before it actually wakes. But the worst part is that if you're in a word processor of any kind, those key presses will eventually register which is just another frustration.

Sure, I could just get one of those lap desk stands and use that to try and work while sitting somewhere other than my desk or a table. But that's not the point, and I'm not going to throw the lap desk thing into my backpack just so I can use my tablet's keyboard if I'm away from home or don't want to sit at a table. It's just extremely disappointing for an otherwise solid experience.

The Samsung Book Cover Keyboard comes with the book cover case and the keyboard, and totals at $350. On its own, the book cover case retails for around $100, making the rest of the ensemble essentially $250. This is definitely a steep price, but it's hard to argue when Apple's iPad Pro Magic Keyboard comes in at the same $350 and doesn't include a back cover that can be removed and used just with the tablet. Where the price does come into question is when you realize that Apple's Magic Keyboard has no such flexibility issues as you can use the iPad pretty much wherever, and don't have to worry about the trackpad accidentally registering clicks whenever the keyboard deck is even slightly flexed.

Should you buy the Book Cover Keyboard?

If you couldn't already surmise, there's almost no circumstance where I would recommend this keyboard to anyone. In fact, I would have already returned mine if it weren't for the fact that the Book Cover Case continues to go in and out of stock and that is much more important to me than the keyboard portion of the set. I wouldn't necessarily say that I paid $350 just to have the back cover with kickstand, as I do use the keyboard when I'm at a desk at home or at a local coffee shop. It's just those "in-between" times where the keyboard belongs in the bin.

I'm holding out hope that Brydge ends up making a keyboard replacement for the Tab S8 Ultra, but it doesn't really seem as though that will come to fruition. This leaves me looking for other replacements and the options are really slim outside of piecemealing together a solution. I've finally reached the point that I largely don't even bother using Samsung's Book Cover Keyboard unless I'm heading out to a coffee shop.

Instead, my Tab S8 Ultra setup consists of the following:

Not only is this one of the best external keyboards and does make for an easier solution if I want to use the Tab S8 Ultra with DeX Mode on a larger monitor, but all of the same keyboard shortcuts are available, and Logitech's mouse options are simply awesome. Plus, there's the added benefit of not needing to be constantly reminded that I pretty much threw money down the drain on this combination.

While this keyboard cover has some redeemable features such as a snappy DeX mode, a neat backlight, and a pretty smooth typing experience, other issues make it frustrating to use. The flimsiness leads to misclicks, there are too many delay issues, and the price is pretty steep.

Andrew Myrick is a Senior Editor at Android Central. He enjoys everything to do with technology, including tablets, smartphones, and everything in between. Perhaps his favorite past-time is collecting different headphones, even if they all end up in the same drawer.