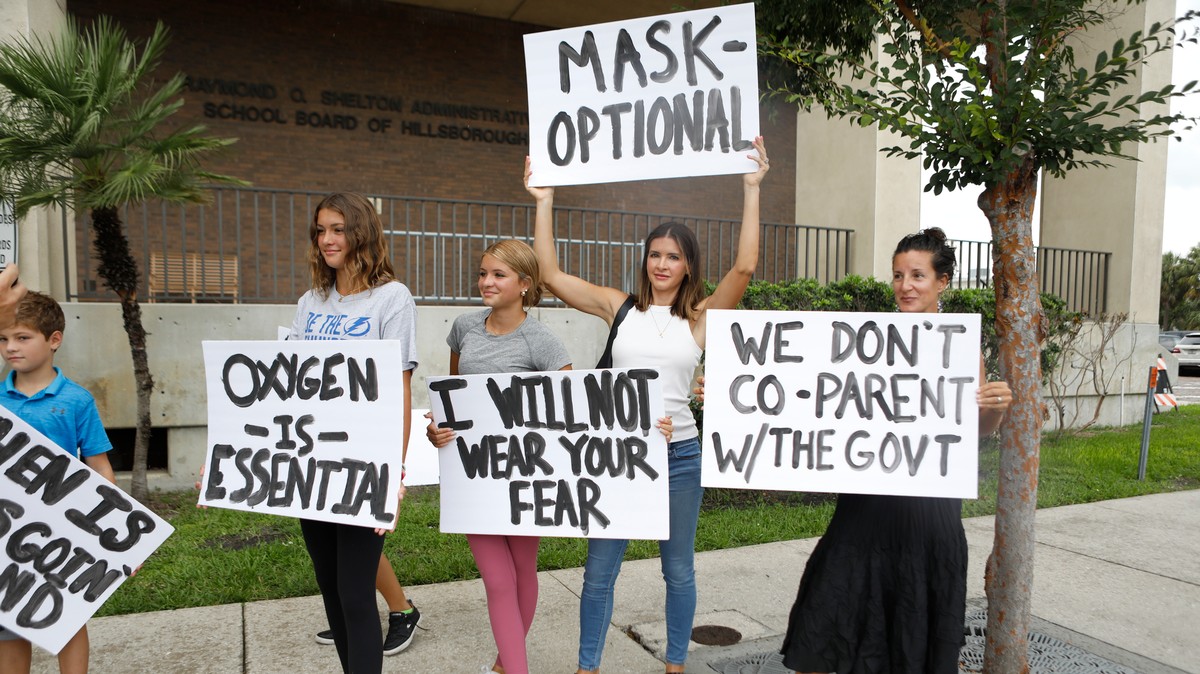 The Delta Variant Is Making Back-to-School Chaotic and Deadly

Families protest any potential mask mandates before the Hillsborough County Schools Board meeting held at the district office on July 27, 2021 in Tampa, Florida. The Centers for Disease Control and Prevention recommended those who are vaccinated should wear masks indoors including students returning to school. (Octavio Jones/Getty Images)

Want the best of VICE News straight to your inbox? Sign up here.

It’s back-to-school season during the apocalypse, and Americans are celebrating by losing their minds.

As the delta variant overtakes the country at a rapid, horrifying clip —and infects kids who were once thought to have been spared the worst of the pandemic—some families are swapping pencil-shopping and backpack-buying for fits of fear and rage about mask mandates and vaccines. Teachers and students are getting sick, parents are fighting for and against mask policies, and school board meetings are turning tense and nasty as a result.

In Florida, the new epicenter of the pandemic in the U.S., officials are also seemingly doing a poor job at controlling the virus itself, considering students and teachers alike are already winding up ill and quarantined. In Palm Beach County, for example, there were 51 confirmed COVID-19 cases between kids and staff just a few days into the school year, and about 400 students entered quarantine, according to the South Florida Sun-Sentinel . Gov. Ron DeSantis, who has tried to aggressively block any school mask mandate , is now facing blowback from some officials there. The county, which is complying with the governor’s rules, is telling students to wear masks while allowing them to opt out if their parents write a note.

“The governor’s got to take responsibility for establishing the ground rules we’re operating under,” Interim Superintendent Michael Burke said on MSNBC, according to the Sun-Sentinel. “This ability for families to opt out is leading to more cases, which will ultimately send more kids home and deprive them of that traditional classroom experience.”

Indeed, some parents, left to their own devices, don’t care much for public health recommendations. In Georgia, where cases are surging, parents clashed over masks in one school district after fifth-graders there were sent home due to a rash of coronavirus cases. Parents showed up to headquarters of the Cobb County School District Thursday, holding signs with opposing messages like “Moms for masks” and “Unmask our kids,” according to CNN . (The district doesn’t currently require masks , anyway.) In Nevada, a Clark County School Board meeting also devolved into yelling on Thursday, with one mother—a registered nurse—comparing mask requirements to abuse, according to the Las Vegas Review-Journal .

On the collegiate level, the University of Iowa put out classroom speech guidance telling faculty members to only comment on vaccines and masks if it related to course materials about “health-related issues,” or, if asked, their own decision to wear masks and get vaccinated. But “making a statement regarding the value of the choice or any value judgments about decisions not to be vaccinated” was a no-go, according to Inside Higher Ed . After pushback from professors, the guidance was removed from the university’s website, which now reads, “To be posted soon—revisions in progress.”

Here’s a few other awful things that have happened with schools in the past several days:

Get the latest from VICE News in your inbox. Sign up right here.

By signing up to the VICE newsletter you agree to receive electronic communications from VICE that may sometimes include advertisements or sponsored content.