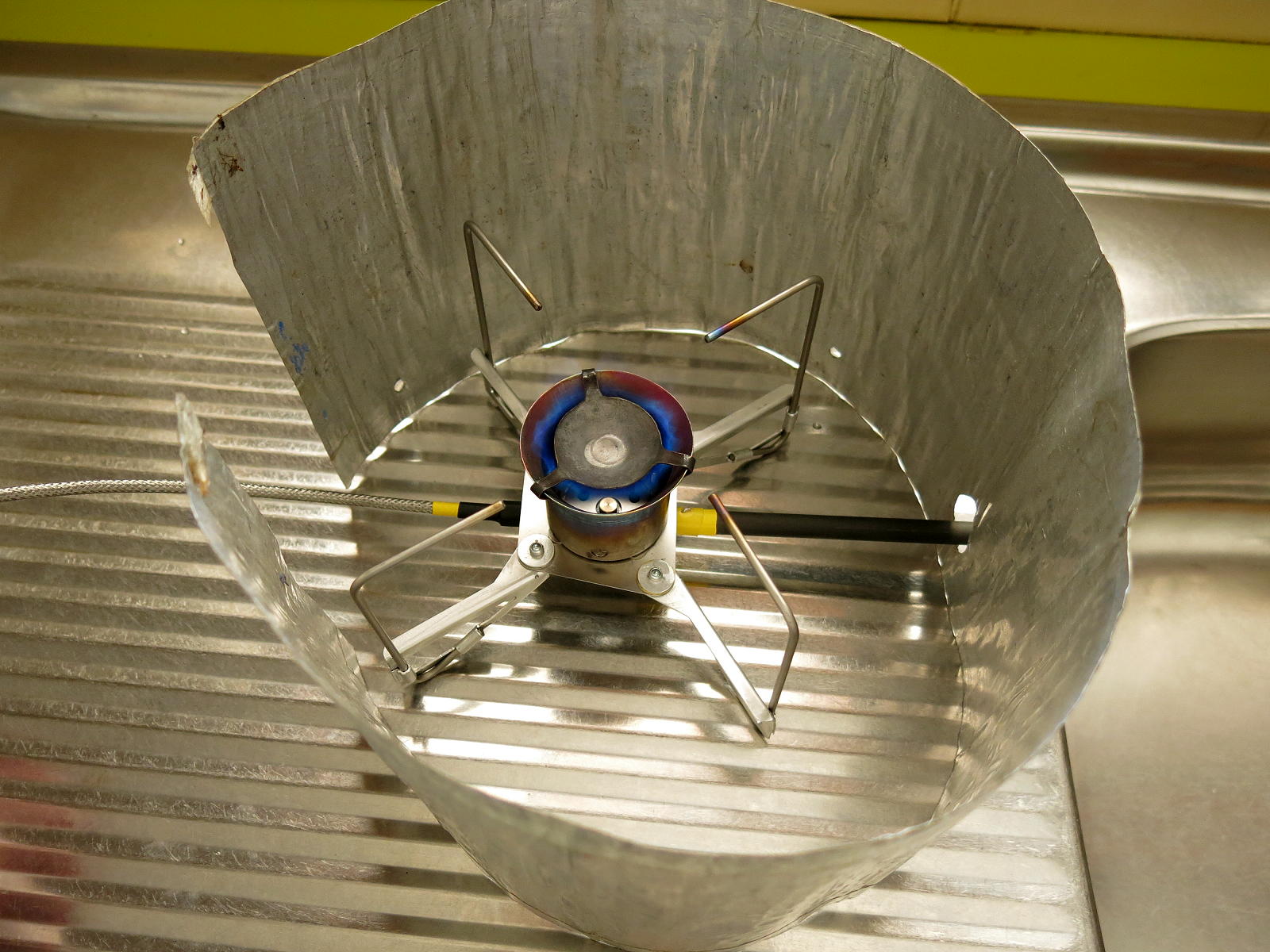 Given that my last stove was called the V4 and this article is about V6, what happened to V5? Well, there was a V5: an attempt at making a simpler burner head for the V4 design. Along the way, I learned a lot about airflow within the burner head and why many commercial stoves have concave (dish-shaped) burner heads: it is all about the fine details of the airflow inside the burner head. But I don’t like concave burner heads because they tend to focus the flame to a focal point, which is not what I want for cooking (I want to cook food, not just boil water). Basically, stoves with a concave burner head just mean the designer could not solve the airflow problem. The V4 has internal baffles inside the burner head, and they work well, but making them is complicated. 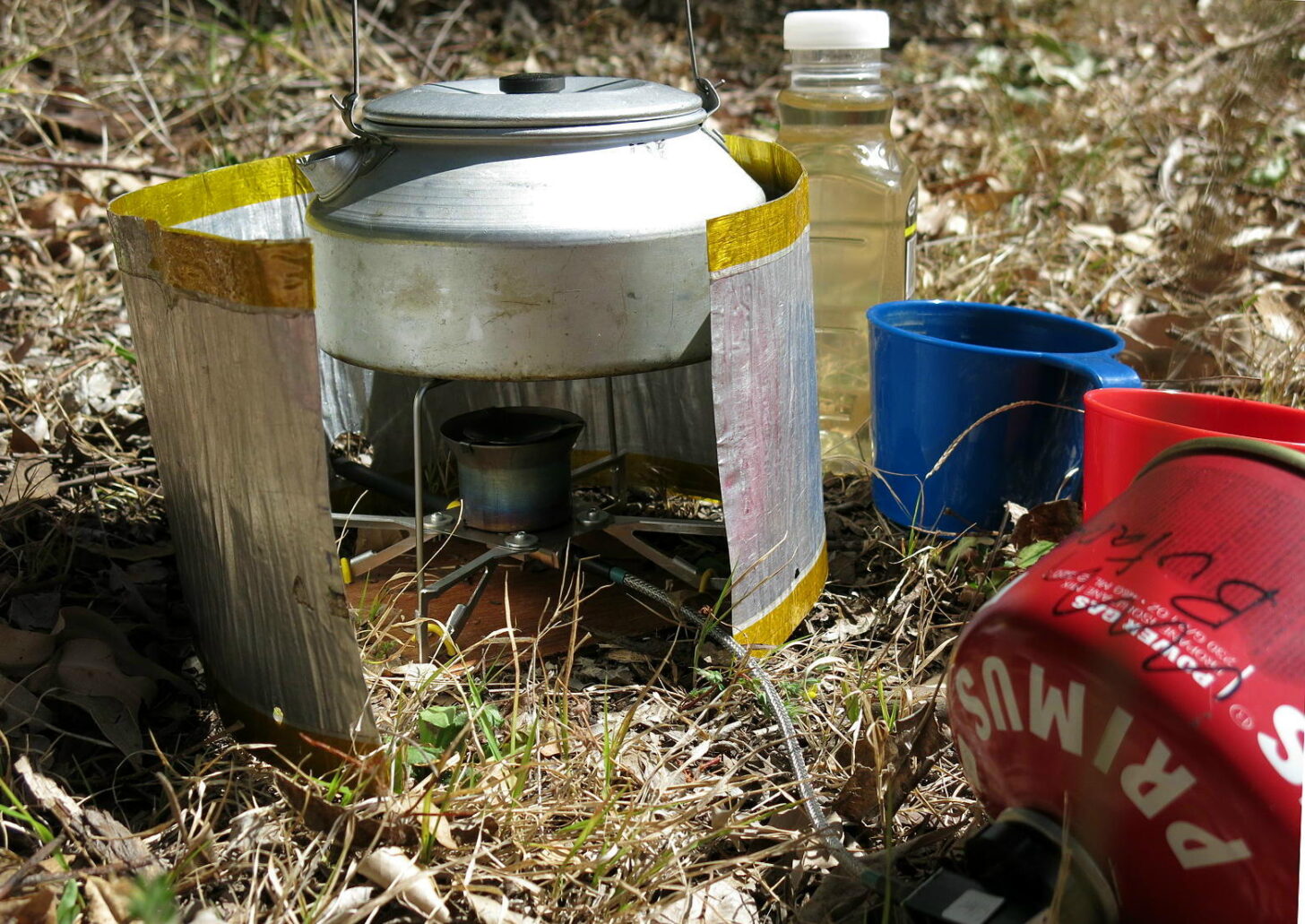 This is the V6 remote inverted canister stove. It derives from the V3 and the V4, combining features of both.

So eventually I abandoned the idea and looked instead at enhancing the V2 and V3 Vortex stove designs. Could I combine the reliability of them with some of the other advances I had achieved in the V4? I could, and this became the V6. Yes, the V6 is another vortex burner design, like the V3, but it has many features of the V4.

On the left we have my V4 stove in use, making coffee for morning tea. On the right we have the V4 stove running somewhere in the bush, although the flame is nearly invisible. Yes, it is burning, but the sun is very bright and hides the flame. I have sold all the V4 stoves I had made so it was a case of making more or making new.

In what follows I have used photos from V2, V3, and V4 as well as photos of V6 to illustrate various points. That’s evolution. Some of the V6 photos have been taken indoors: at the time of writing we in Australia were in a very strict COVID lockdown, and going walking for any distance was not possible. But I snuck out for a few photos.

Editor’s Note: If you’d like familiarize yourself with the previous versions of Roger’s stoves, check out these articles and forum posts: V1, V2, V3, V4, and Engineering the V4 Winter Stove

Basics of the V6

This is it. Well, it’s a Vortex burner, as in the V2 and V3 stoves, but with legs and pot supports inspired by the V4. 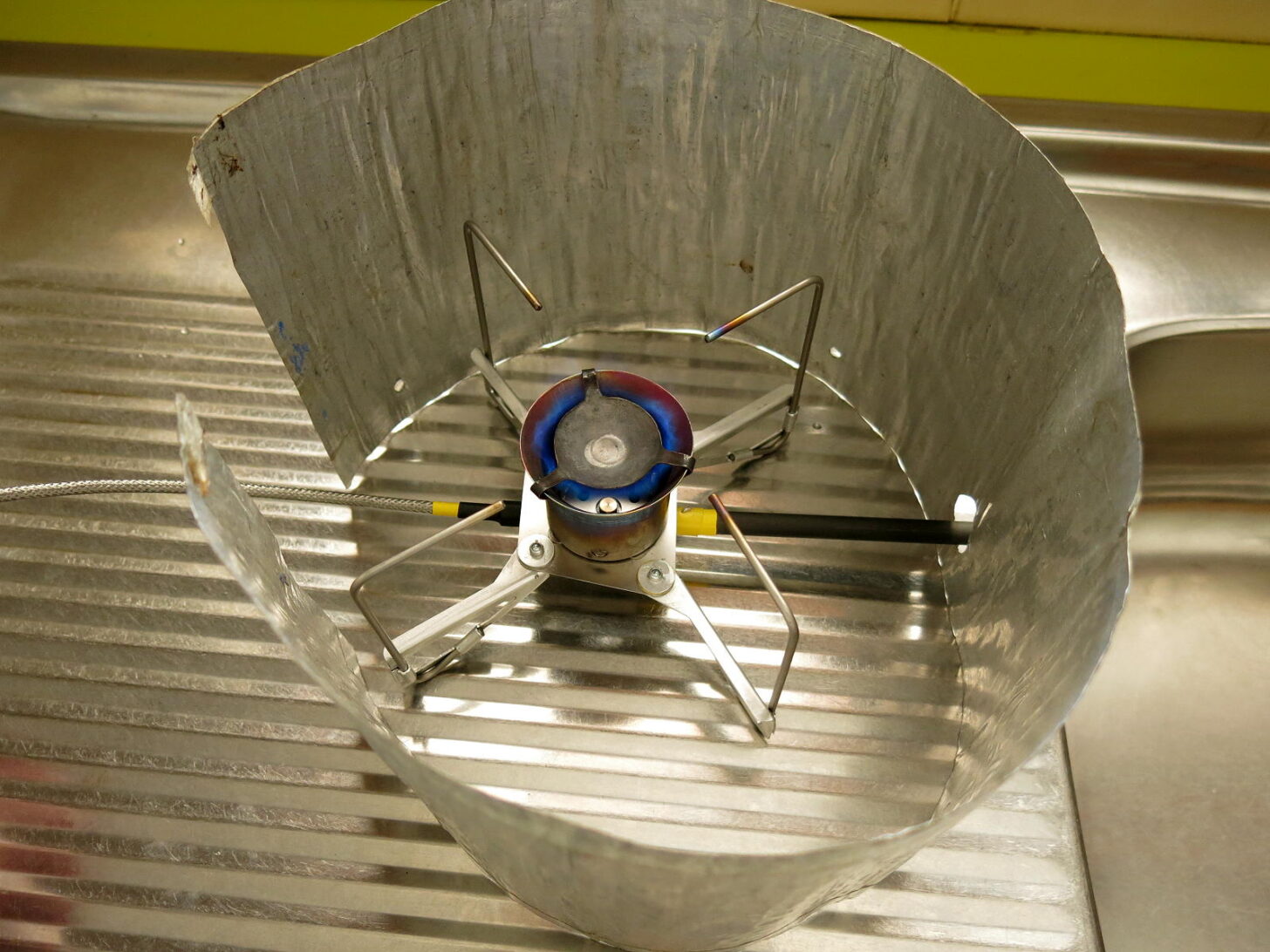 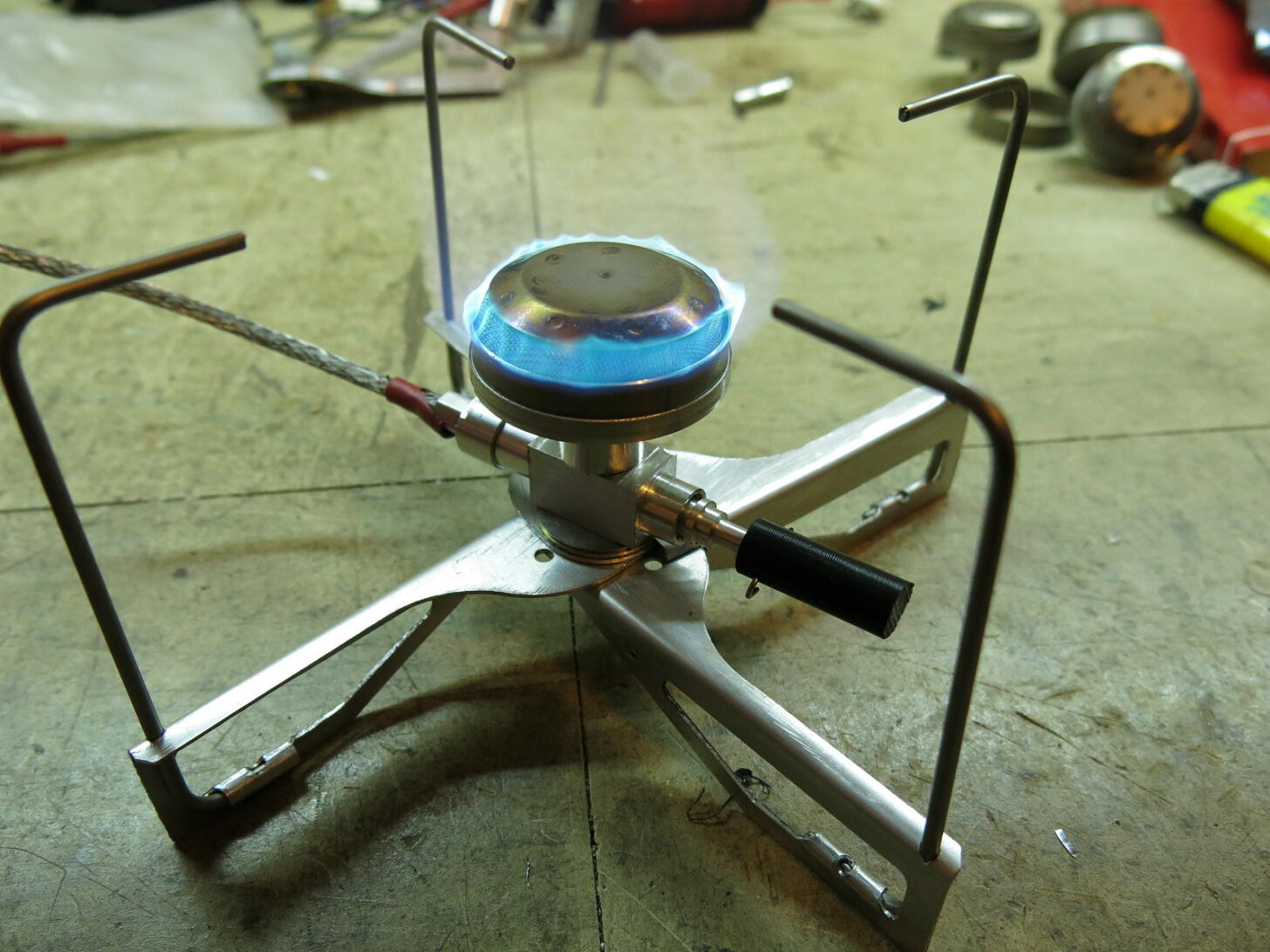 This is the V4, with its pivoting legs. I had noticed that while the pivoting legs in the V4 were very easy to use in the field, the length of the basic aluminium leg meant that one had to be just a little bit careful with sideways forces, especially at the top of the pot supports. One stove had actually been squashed in the post (mail) on the way to a European buyer, which left all the pot supports tilted sideways by about the same angle. The burner head was also bent or tilted in the same way to about the same angle. The stove did not leave me looking like that! It was all very upsetting. The buyer took it into his workshop and fixed it: a lot cheaper than posting between Australia and Europe for repairs. I have also seen (on YouTube) damage to an ultra-light BRS-3000T upright stove caused by a user putting a 10 lb cast iron cooking pot on it. You should treat UL gear with at least some care.

Under my typical cooking use any slight wobble has never been a problem, and in fact has not been noticed anyhow, and many dinners have been cooked by myself and others with no spills that I know of. The design worked, but I felt I could do better. To make the legs stiffer I could either use heavier gauge sheet metal or make the sheet metal legs shorter. Obviously shorter legs would be both lighter and stiffer, so that is the way I wanted to go. I also wanted better support at the pivot.

I still wanted to have a large pot support outer diameter, to handle large pots such as my 1.5 L titanium pot. Such wider pots make far more efficient use of the heat from the flames than do narrow pots. The solution was obviously to move the pivot point for each leg outwards, to the edge of the base plate. That is, instead of having one central pivot for all four legs, each leg would have its own dedicated pivot point. This would make the leg shorter and stiffer, although it might throw more force (twist, actually) onto the round base plate. Would it flex? Well, not much. 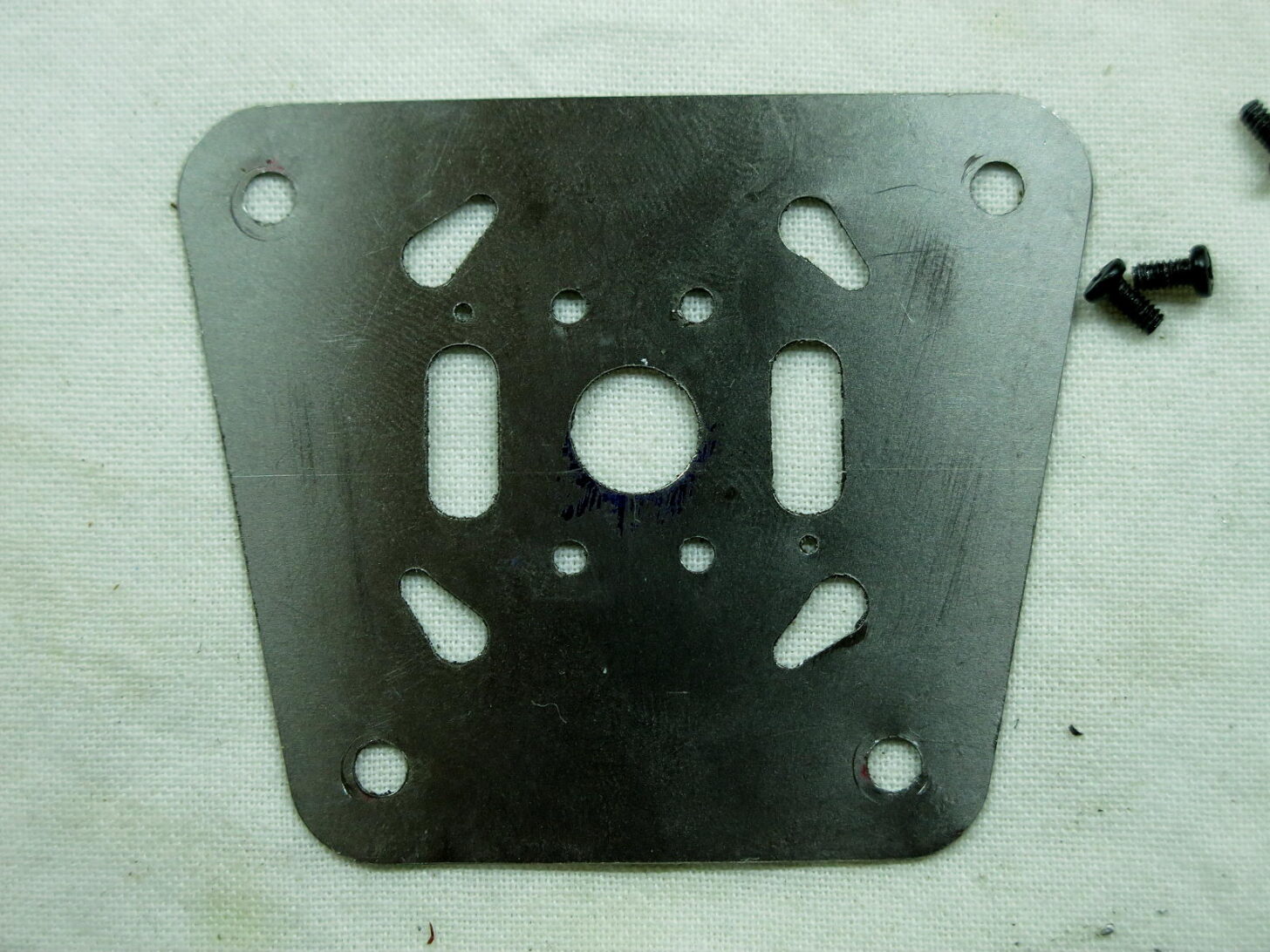 So I shrank the size of the base plate a bit and cut off the excess edges, leaving a sort of tapered rectangle shown here. The reason for the taper is explained later. However, with the 0.8 mm thick aluminium alloy sheet, I thought the stiffness was not quite enough; the stiffness was also reduced by the number of holes in the design. As you can see here, there are quite a few of them. So I switched to 0.44 mm titanium sheet, which is much stiffer. Why 0.44 mm thick sheet? I had it in stock, and it seemed stiff enough. Titanium does have a higher density (4.54 g/cc) compared to aluminium (2.12 g/cc), but when you factor in the reduced thickness of the titanium sheet it turns out to be slightly lighter than the aluminium sheet, by about 12%. We are winning (even if the total win is not all that great).

Below is a V6 stove in operation, in the kitchen for testing. The photo is meant to show the burner chamber. The diameter of the burner chamber is set by the titanium tubing I have in stock – 38 mm OD, 0.5 mm wall thickness. It was bought for this purpose a long time ago. Other diameters are of course available, but most of them have a thicker and heavier wall, like 1.0 mm or greater. This tubing seemed to work just fine in the V2 and V3 stoves, so why change?