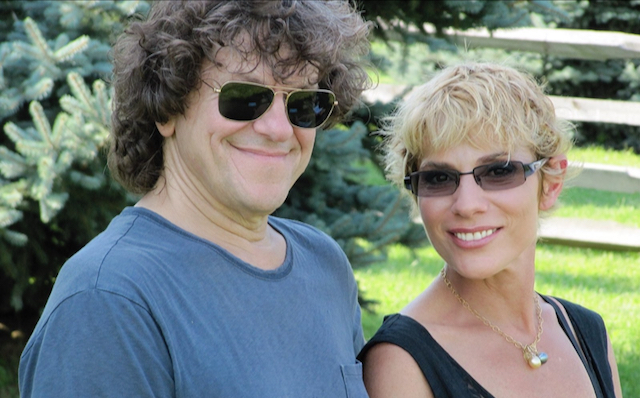 Rona Elliot was a 22-year-old backpacking her way across north Africa when she received a telegram from Mel Lawrence, an ex-boyfriend who had just been hired by Michael Lang to work at a music festival he was planning as director of operations. “Come home,” it said. “Stop. Festival in upstate New York. Stop.”

Elliot was headed to Algiers for a Pan-African Cultural Festival organized by Timothy Leary and Eldridge Cleaver when she made the decision that would impact the rest of her life.

“I had spent a lot of time in the Catskills bungalow colonies, so Mel encouraged me to ask Michael for a job,” says Elliot. With Wartoke’s Jane Friedman already aboard as publicist, Rona suggested working in community relations, so she moved up to Wallkill, New York, the original site for the festival – along with 12 others that comprised the team — to “convince the local Kiwanis Club how great Woodstock was going to be.”

Elliot — pictured above with Lang as they reconvened for the festival’s 40th anniversary in 2009 — went on to work at legendary Los Angeles rock station KHJ and as a music journalist and reporter for the “Today” show. But her major job over the past half-century is as caretaker of the Woodstock legacy, a combination historian, archivist, documentarian and “Jewish mother” for all the festival “survivors” over the years. She worked on a 40th anniversary Woodstock book with Lang, while conducting classes on the fest at NYU and Berklee School of Music. A self-described Buddhist practitioner, Rona’s roommates and friends over the year have included several countercultural icons, like philosophy guru Alan Watts and Yippie-turned-yuppie Jerry Rubin.

“The story of Woodstock is both magical and astonishing,” says Elliot, 74, who lives in Los Angeles with her husband, dogs and children. “But it has less to do with people’s individual personalities than a wave of undeniable energy. That idea has lived on in the collective imagination for over 52 years and will continue after Michael’s death. He created something both timeless and universal.”

Elliot was very close with Lang and his family, noting he had been sick for a while, but chose to keep his condition private to all but a very few. “You can only imagine the kumbayas around the world if it had been known,” she says. “I never, ever dreamed that he would die, though. He was such a force that it didn’t seem possible. At a certain point, though, it became clear Michael was going to leave. With his energy, vitality and force of personality, his death is still hard to accept even when you’re staring it in the face.”

And what a face it was. With that impish grin, curly Jewfro, bare-chested swagger and ever-present motorcycle, the Brooklyn native became the embodiment of the Woodstock spirit, his equanimity in the face of disaster captured for all time in the movie of the event. Much like Orson Welles’ “Citizen Kane,” Lang’s legacy was to create his masterpiece – and Woodstock was nothing if not high-level performance art – at an early age and then fruitlessly attempt a sequel, with subsequent efforts in 1994 and 1999 unable to capture the original’s kismet, let alone his well-publicized failure to pull off a 50th in 2019.

“Michael recognized the gravity and breadth of his contribution,” says Elliot. “His disposition was always incredibly calm. I never saw him lose his temper. He was always gracious when people from around the world would thank him for what he’d done. He knew what Woodstock meant to them.”

Elliot insists that, like the Beatles, Woodstock required all four of its original partners – Artie Kornfeld along with financiers Joel Rosenman and the late John Roberts – to make it happen. “Of course, Michael was the face, it was his vision,” she says. “That disposition, that Cheshire cat smile, made it impossible for people to turn him down. When he said things would work out, everyone believed him. He was sort of the Pied Piper in that way. People just naturally trusted and followed his lead.”

Along with innovators like Chip Monck and Bill Hanley, who were responsible for the festival’s lights and sound, respectively, Lang paved the way for modern rock concert production and the subsequent selling of the counterculture once Madison Avenue realized the numbers represented by the Woodstock generation.

“Woodstock wasn’t a happy accident,” says Elliot, an admitted “old hippie.” “It was the result of birth control, civil rights, feminists burning their bras, Vietnam, student protests, smoking dope and, most importantly rock ‘n’ roll. There was a moment when the clouds parted and peace and love reigned for 72 hours, but the door closed fast.”

Lang, who went on to manage Joe Cocker, Billy Joel and Rickie Lee Jones, as well as start his own record label, Just Sunshine, which released albums by Karen Dalton and Betty Davis, never was able to duplicate his original Woodstock magic.

“I’m sure Michael would’ve liked to have made more money; who wouldn’t?” says Elliot, who describes Lang as “a good father, astonishingly well-read, a painter and a sculptor. He never sold out, but not for lack of trying. He was wealthy in his generosity, friendships, vision, kindness, someone you could always count on. He had an unbelievably wide circle of friends all over the world. He was beloved.  Did he have his issues? Of course. I’d seen him upset, disappointed and feeling misunderstood. But never angry.

“Michael was a Jewish kid from Brooklyn, like many of us, a spiritual seeker for whom music provided the experience of community, connection and a profound sense of peace and love. Woodstock was just the apogee of that expression. And it was destined to never be duplicated.”

Eliot compares him to fellow visionaries Steve Jobs and George Harrison in seeking “to connect all of us… Michael understood who he was in the universe, what his contribution was, which was enormous. He understood profoundly the legacy of Woodstock. It meant everything to him. He did the job he came to do. Not everybody can say that.”

After his plans for Woodstock 50 fell through, Michael Lang spent the anniversary of the festival in 2019 at Max Yasgur’s original home in Bethel, NY – the first time he’d been there since signing the papers to hold it on his dairy farm – where he was joined by Elliot, original photographer Henry Diltz and sound engineer Bill Hanley and his wife, as 1,500 people camped on the site, where a much scaled-down concert featuring Arlo Guthrie would take place.

“We sat around the kitchen table and exchanged Woodstock stories,” recalls Elliot, her voice choking with emotion. “It was remarkable. That’s where we were supposed to be. Where else could we be? It was sacred.”