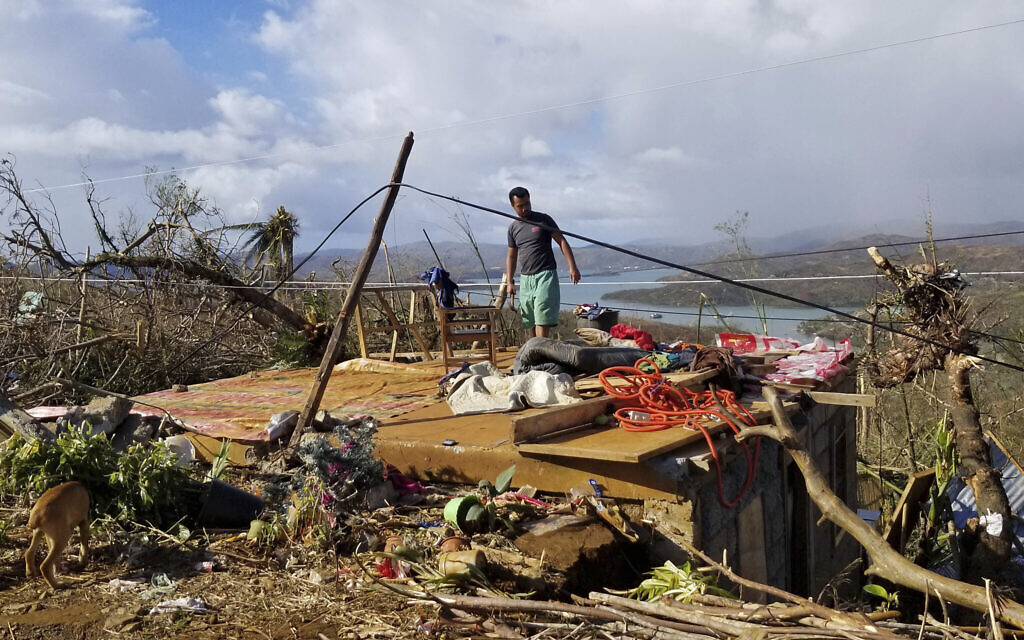 At least eight Israeli nationals are believed to currently be stranded on Siargao Island in the Philippines, where the strongest typhoon to hit the country this year claimed the lives of over 350 people by Monday, and desperate survivors pleaded for urgent supplies of drinking water and food.

According to Yafit Meirov, an Israeli business owner who previously resided and worked on the island, eight Israelis who were living there were all safe, but urgently needed help.

“There’s no electricity right now and [with downed power lines and no mobile signal], it’s hard to reach anyone there. But we know they are okay and have shelter,” Meirov told The Times of Israel on Monday.

Siargao Island is a popular surfing destination, located in the province of Surigao del Norte in the Philippine Sea, about 800km (497 miles) southeast of the capital Manila.

“There’s been millions in damages to homes that have been destroyed, property, places. This is a very serious typhoon,” added Meirov, who has been in Israel since the outbreak of the COVID-19 pandemic in March 2020. She previously owned a travel agency and an eatery on the island and had been meaning to make it back there, having reasoned at the beginning of the pandemic that she would see the global crisis through in Israel with family for a few months before heading back.

“I left everything there, whatever is left of it now. I intended to be here for a few months and go back,” she said. 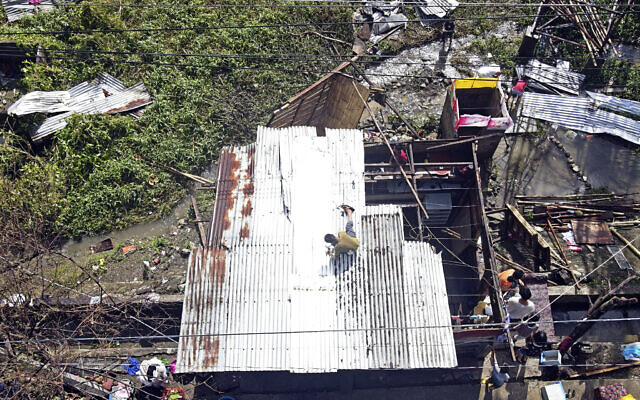 A man fixes the roof of his damaged house due to Typhoon Rai in Surigao del Norte, southern Philippines on December 19, 2021. A strong typhoon engulfed villages in floods that trapped residents on roofs, toppled trees, and knocked out power in southern and central island provinces, where more than 300,000 villagers fled to safety before the onslaught, officials said. (Erwin Mascarinas/Greenpeace via AP)

Meirov said she was now raising money to help people on the ground buy water and supplies, and was in the midst of setting up a charity called, “Israel helps Philippines.”

Sa’ar Geva, a hostel chain owner on Siargao Island, spoke to the The Times of Israel from Manila, noting that he was worried about his staff of about 100 people who had no water, no electricity, and could not be reached easily.

Geva, 34, has been living and working on the island for the past six years. He said people there had prepared as much as possible for the typhoon, “but we didn’t expect it to be like this.”

“Anything that wasn’t concrete was erased, there is flooding, the damage is absolutely crazy,” said Geva.

He explained that someone on his staff managed to get in touch via satellite phone to let him know that everyone appeared to be accounted for, including his fellow Israelis. Geva also said he was able to make direct contact with all but one of the eight people through different local networks.

“But they don’t have water, or food, or electricity, and we are now in the midst of buying supplies before trying to head back to Siargao later in the week,” said Geva. He expects to be hitching a ride with an aid mission to the island on Wednesday.

“Im[sic] flying there in a few days to help and assist, we need donations it can be either in equipment/food or in money. you can msg me and ill direct your donation at the right way. lets [sic] help this beautiful island, my home, the happiest place on earth to comeback [sic] being liveable,” Geva wrote on Facebook on Sunday, urging followers to send donations via PayPal.

Tal Oran, a 25-year-old Israeli content creator on YouTube, who has been living on the island for two years, told a local news station Saturday that urgent help was needed.

“Me and most Israeli friends and foreigners here…most of us are ok. The situation is pretty bad across the islands…we desperately need aid and care.. But we’re ok, we are in high spirits, we are working hard…we need aid as fast as possible,” Oran said.

At least 50 missing across Philippines

Authorities said Monday that at least 375 people were killed, 500 were injured, and 56 were missing as a result of the typhoon. Several central provinces in the country were struggling with downed communications and power outages and pleading for food and water.

The toll may still increase because several towns and villages remained out of reach, due to downed communications and power outages, although massive cleanup and repair efforts were underway.

At its strongest, Typhoon Rai packed sustained winds of 195 kilometers (121 miles) per hour with gusts of up to 270 kph (168 mph) before blowing out into the South China Sea on Friday.

Many were killed by falling trees and collapsing walls, flash floods, and landslides. A 57-year-old man was found dead hanging from a tree branch and a woman was blown away and died in Negros Occidental province, police said.

Governor Arlene Bag-ao of Dinagat Islands, among the southeastern provinces first hit by the typhoon, said Rai’s ferocity on her island province of more than 130,000 people was worse than that of Typhoon Haiyan, one of the most powerful and deadliest typhoons on record, which devastated the central Philippines in November 2013, but did not inflict any casualties in Dinagat.

“If it was like being in a washing machine before, this time there was like a huge monster that smashed itself everywhere, grabbed anything like trees and tin roofs and then hurled them everywhere,” Bag-ao said by telephone. “The wind was swirling north to south to east and west repeatedly for six hours. Some tin roof sheets were blown away and then were tossed back.” 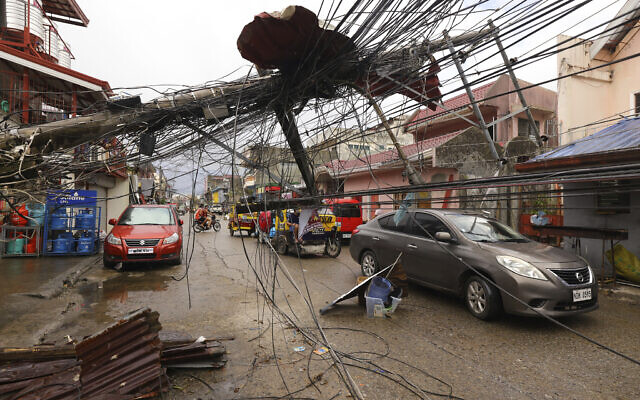 Cars pass by a toppled electrical post due to Typhoon Rai in Surigao City, Surigao del Norte, southern Philippines as power supply remain down on December 19, 2021. (Jilson Tiu/Greenpeace via AP)

At least 14 villagers died and more than 100 others were injured by flying roofs, debris, and glass shards, and were treated in makeshift surgery rooms in damaged hospitals in Dinagat, Bag-ao said. Many more would have died if thousands of residents had not been evacuated from high-risk villages.

“Our situation is so desperate,” said Ferry Asuncion, a street vendor in the hard-hit seaside city of Surigao, the capital of the province Surigao del Norte to which Siargao Island belongs. Residents urgently needed “drinking water and food,” he said.

Dinagat and several other typhoon-hit provinces remained without electricity, and communications and many residents needed construction materials, food and water. Bag-ao and other provincial officials traveled to nearby regions that had cellphone signals to seek aid and coordinate recovery efforts with the national government.

More than 700,000 people were lashed by the typhoon in central island provinces, including more than 400,000 who had to be moved to emergency shelters. Thousands of residents were rescued from flooded villages, including in Loboc town, in hard-hit Bohol province, where residents were trapped on roofs and in trees, where they went to escape the rising floodwaters.

A senior official at the national disaster agency said he had not expected so many fatalities.

“I was proven wrong, as it appears now coming from the reports,” said Casiano Monilla, deputy administrator for operations.

Emergency crews were working to restore electricity in 227 cities and towns, officials said. Power had been restored in only 21 areas so far. Cellphone connections in more than 130 cities and towns were cut by the typhoon, but at least 106 had been reconnected by Monday, officials said. Two local airports remained closed except for emergency flights, but most others have reopened, the civil aviation agency said.

A country vulnerable to typhoons

Rai hit the Philippines late in the typhoon season — most cyclones develop between July and October. Scientists have long warned that typhoons are becoming more powerful and strengthening more rapidly as the world becomes warmer because of human-driven climate change.

The Philippines — ranked among the most vulnerable nations to the impacts of climate change — lies between the Pacific Ocean and the South China Sea. It also lies along the seismically active Pacific “Ring of Fire” region, making it one of the world’s most disaster-prone countries.

The country is hit by an average of 20 storms every year, which typically wipe out harvests, homes, and infrastructure, in already impoverished areas.

Typhoon Haiyan, called Yolanda in the Philippines, was at the time the strongest storm ever to have made landfall and left over 7,300 people dead or missing. The death toll from Rai is not expected to get anywhere close to that number.