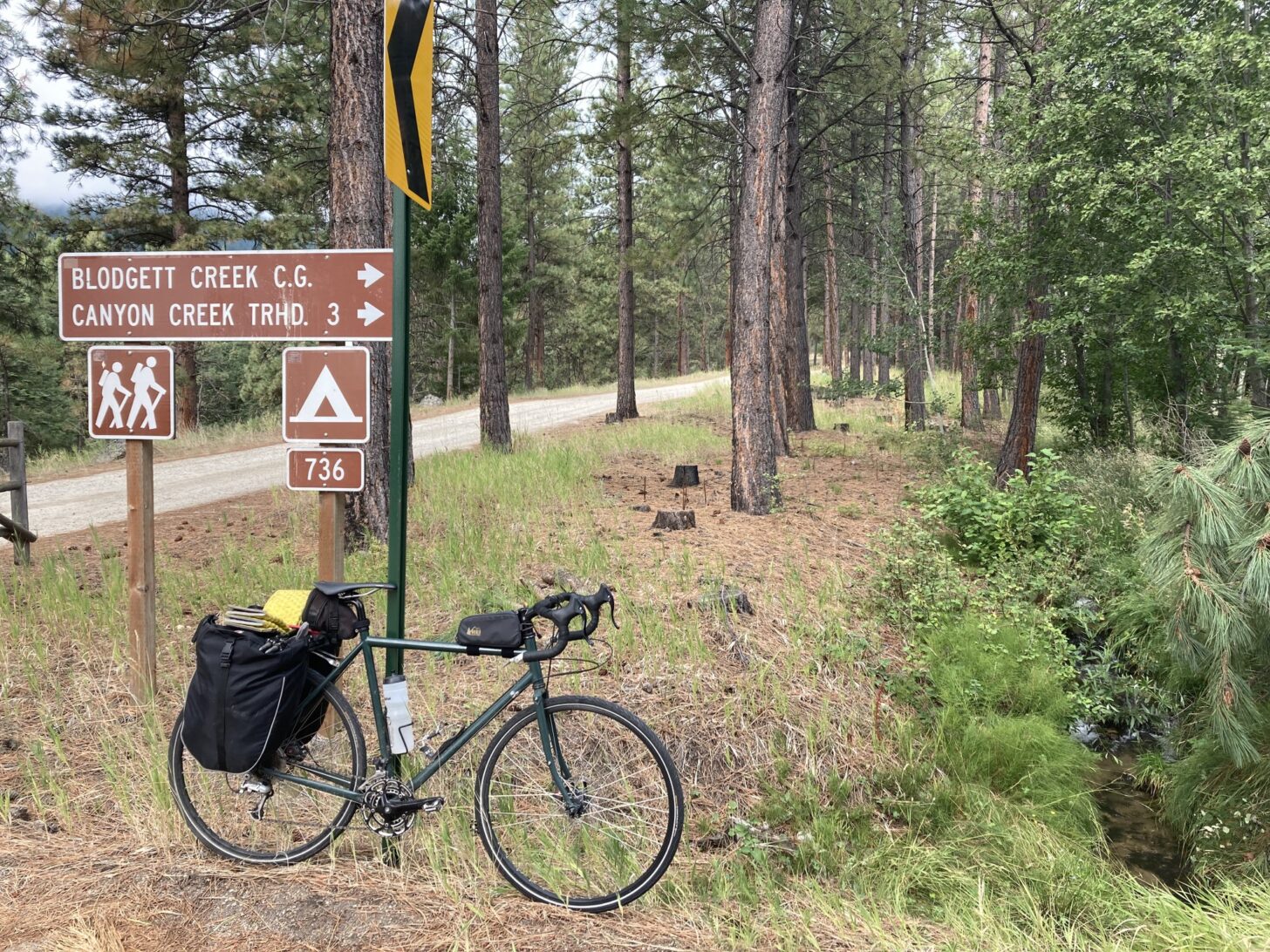 How Biking to Trailheads Can Enrich Backpacking

Getting to a trailhead might involve better scenery than commuting to work and could require some deliberate maneuvering around obstacles or the use of a four-wheel-drive vehicle, but for most of us, it just involves the mundane operation of a car.

As I started my career in public libraries after finishing graduate school in Kentucky, I chose to look for jobs in places that had prime proximity to public lands. I derive little joy from driving, preferring pretty much any physical activity – hiking, biking, paddling, skiing, or even snowshoeing – to sitting in a car. But it is often the most practical form of transportation.

I figured the closer I lived to trailheads the better. Aside from eastern Kentucky, eastern Tennessee, and western North Carolina, the bulk of my applications went to libraries out West. Most counties have public libraries (and if they don’t, I would strongly question the wisdom of living in them) and most counties out West have access to public lands (the previous caveat is also applicable here). Seeking a life that combined two of the most wonderful things in America – public lands and public libraries – seemed like a good option for a young backpacker who oddly didn’t have the youthful zeal (or, in hindsight, perhaps the wisdom and courage) to go hike the PCT (Pacific Crest Trail a.k.a. the Post-College Trail) and then figure out a career afterward.

On the road to a trailhead in Montana. All gear is stored in the panniers, bicycle touring style, including a frameless pack to allow for an easy transition to backpacking.

Through a combination of good luck and good timing, both my current and previous residences have afforded me the ability to bike to trailheads in less than an hour of moderately-paced bicycling. Riding a bike to a trailhead that accesses a wilderness area is one of the most sublime pleasures I experience. Rather than being in a weird purgatory between when I leave my house and when the trip really seems to begin (i.e. my car is parked, locked, and I’m hiking), I get an instant immersion in the experience. With each turn of the pedals, I get closer to a different part of the journey, but the journey itself has already begun.

I’m using my own power, albeit with a slight mechanical advantage, to transport myself to the trailhead. And along the way, I’m seeing things at a more human pace and in a richer way. I notice the houses getting fewer and farther between. Things become more quiet and clear – not the least of which is usually my mind. Birds flit between trees and creeks ramble alongside the road. Without barriers of glass and steel surrounding me, I become more attuned to the landscape as I make my way to the trailhead. There’s no rumbling of an engine in front of me interrupting the natural reverie as I cruise down a mellow forest road, but sometimes the panting from my two lungs on steep climbs rivals the noise made by the humble four-cylinder in my Honda.

Once I reach the trailhead, it’s a rather simple matter of unpacking my saddlebags and loading up my backpack (I will note that frameless packs are particularly well-suited for biking to trailheads as they can more easily be stowed when in transit than an internal frame pack). I’m already warmed up from the ride, but rarely overtired. I’ve found that I’m able to slip much more easily into the flow state that I sometimes achieve when hiking on trails after biking to the trailhead when compared to having driven there. 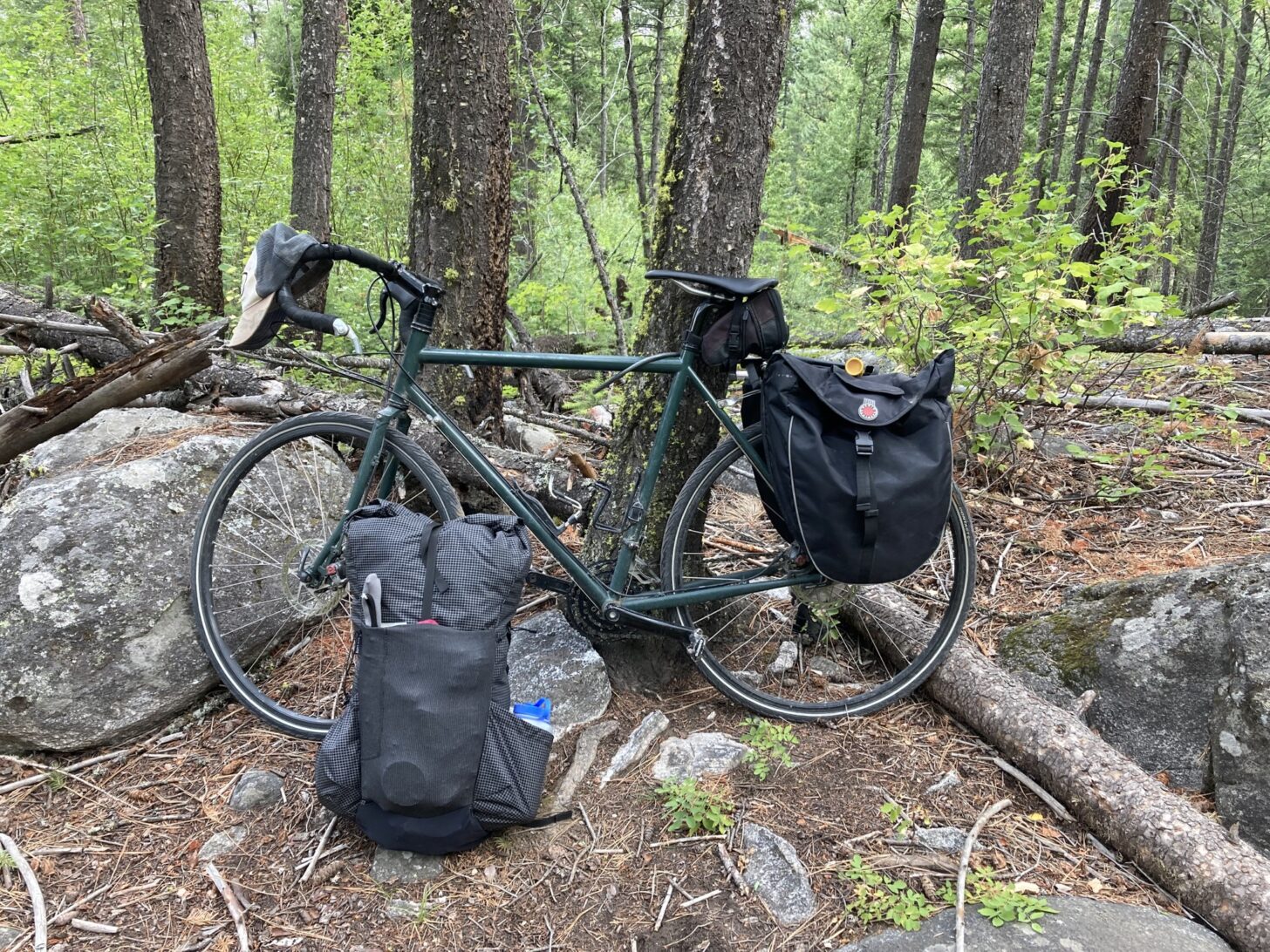 Loaded up and ready to hike. All the gear that was previously in the panniers was transferred to to a Pa’lante V2 pack for a twelve-mile hike to a lake after a five-mile bike ride to the trailhead.

While spending time in nature is rewarding however I get there, I found that on my most recent trip – a four-day trek in the Selway-Bitterroot Wilderness – that having biked the seven miles to the trailhead from home rather than having driven it added a depth to the trip that was palpable but hard to parse out. It provided me with a connection to and interaction with the landscape and made it feel, in a certain sense, more real. Whereas however magical my trips to far-flung places like Aravaipa Canyon Wilderness and Capitol Reef National Park have been, they feel otherworldly in a more layered way than simply by virtue of their scenery. And I suppose they feel that way, in large part, because I don’t live in that world. I’m reliant upon almost incomprehensible amounts of fossil fuels and heavy machinery (planes and cars) to get there. Although I’m still walking in those places, the fact that I live somewhere far, far away seems to separate me on some level. 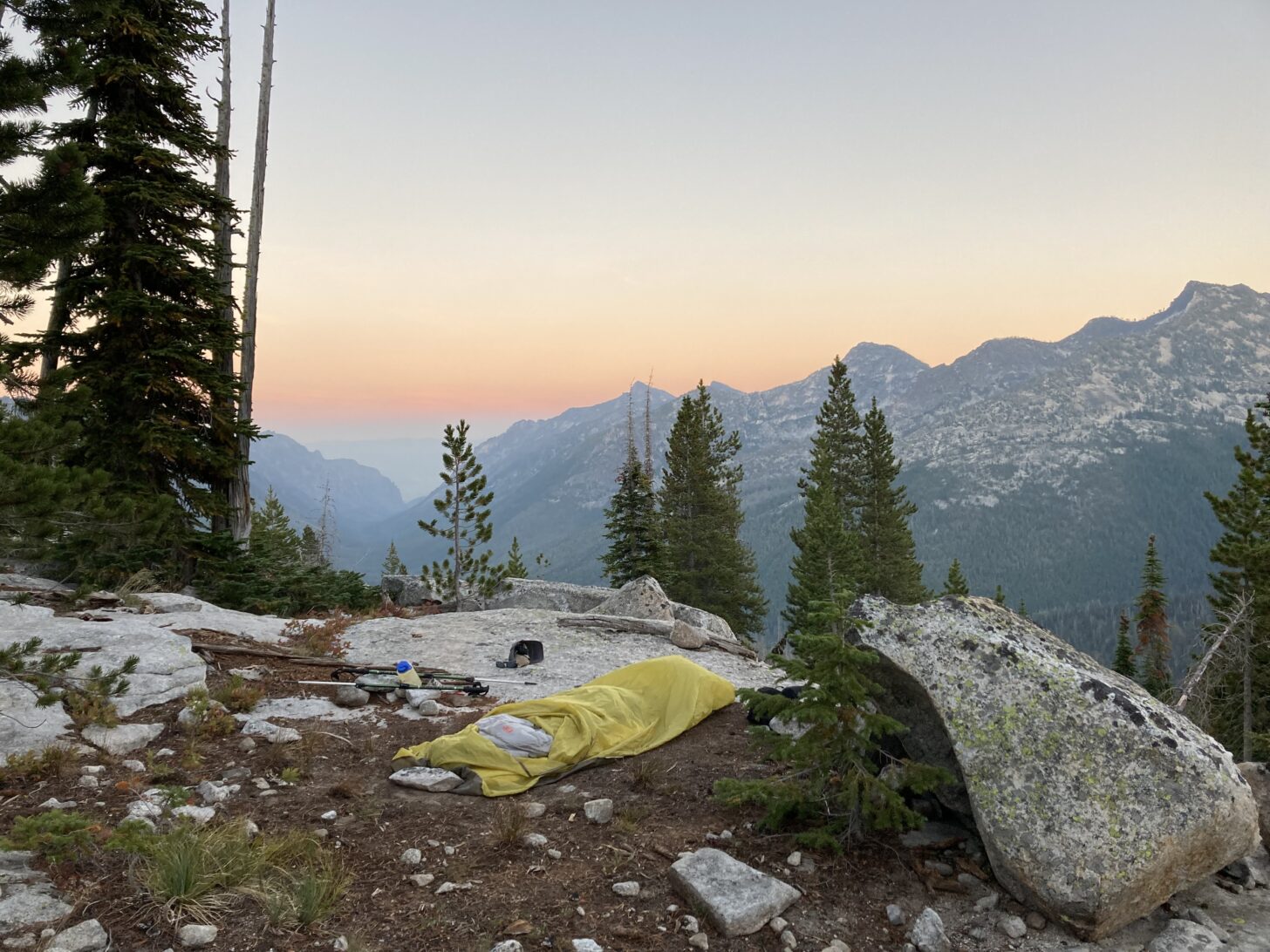 My campsite on the last night of a recent trip. The next day I would hike out, hop on my bike, and enjoy a (mostly) downhill ride home.

I’m certainly not the first to notice this phenomenon, as Wendell Berry eloquently and accurately described it in The Unforeseen Wilderness over 50 years ago. Although specifically about Kentucky’s Red River Gorge, many themes and insights are universal.

“We seem to grant to our high-speed roads and our airlines the rather thoughtless assumption that people can change places as rapidly as their bodies can be transported,” Berry wrote. He then described his experience of arriving at a campsite after leaving work, driving on the interstate, taking roads to the trailhead, then finally hiking a few miles and feeling somewhat unsettled upon settling into camp, ” …my mind is still keyed to seventy miles an hour. And having come here so fast, [my mind] is still busy with the work I am usually doing. Having come here by the freeway, my mind is not so fully here as it would have been if I had come by the crookeder, slower state roads; it is incalculably farther away than it would have been if I had came all the way on foot.” 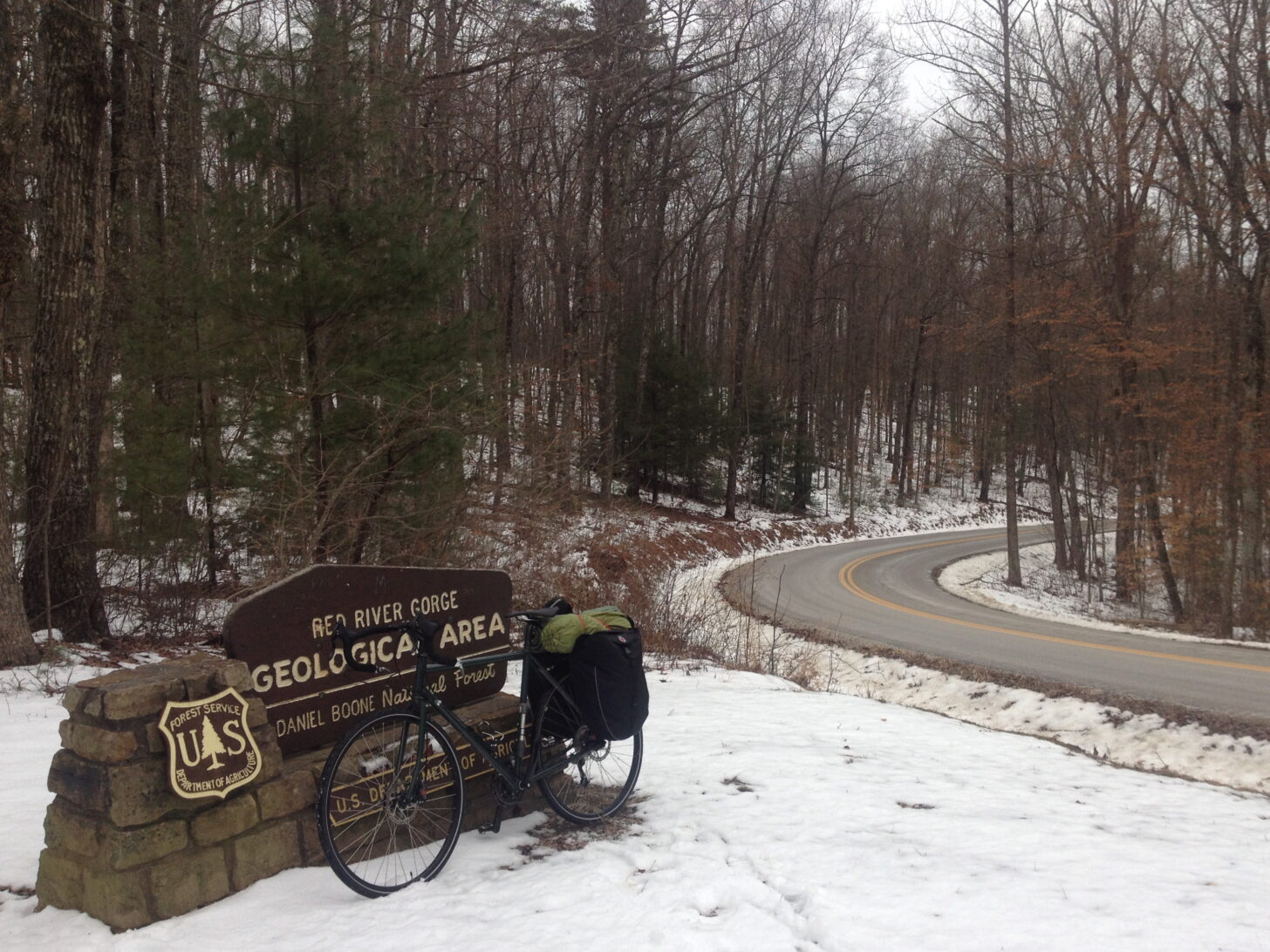 The Red River Gorge has been a formative landscape in my growth as a person and was also where I first experienced the joy of biking to a trailhead.

I can wholeheartedly attest to the veracity of this observation – during the trips where I’ve pedaled to a trailhead for a backpacking trip I feel no metaphysical jet lag when I get to the trailhead and start my hike. Coincidentally, I made many trips to the Red River Gorge via bicycle to backpack as I once lived 15 miles away in Stanton, Kentucky, and Berry’s words were often in the back of my mind.

At the risk of speaking in eye-roll-inducing truisms, when I get to the trailhead to start my hike after biking, I’m there. And the spectacular compounding effect of this is that when I get to where I’m going on my backpacking jaunt – a lake, peak, or meadow, for example – I’m very much more there. Looking up at the incredible walls of a sandstone canyon in Utah this past spring was amazing, but standing on top of a summit on the crest of the Bitterroot Mountains on the third day of a recent trip and looking out over the crags and valleys of the 1.3 million-acre Selway-Bitterroot Wilderness whilst on an entirely unmotorized vacation was a more profound experience. Not only was getting there half the fun – bicycling, hiking, scrambling – but how I got there made an incalculable improvement in the totality of the experience. 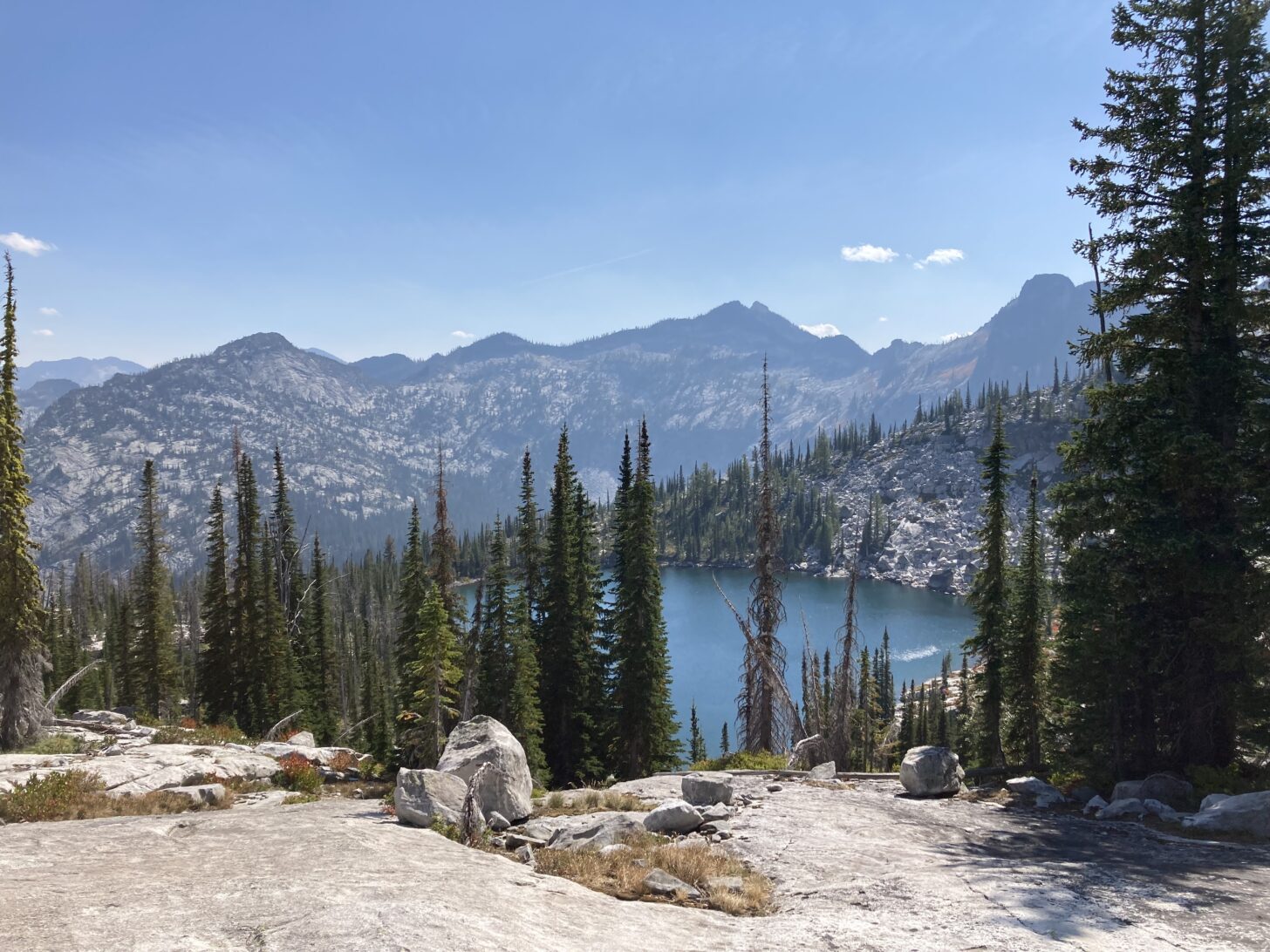 It’s hard to improve on the view of a mountain lake, but for some reason having biked to the trailhead made this scene so much sweeter.

I realize that most backpackers don’t live in a place where biking to a trailhead is realistic. Our transportation system was designed to favor the automobile and excludes, if not outright antagonizes, more pedestrian modes of travel. And our centers of population are usually too far from public lands to allow for biking to a trailhead to be practical for a weekend trip. Being able to take the time to bike to a trailhead for backpacking, like backpacking in general, requires varying degrees of privilege and prioritization.

But it is most definitely something that if you can do, you should do – at least once.