An officer walks outside of Robb Elementary School in Uvalde, Texas, on May 25. Allison Dinner/AFP via Getty Images hide caption 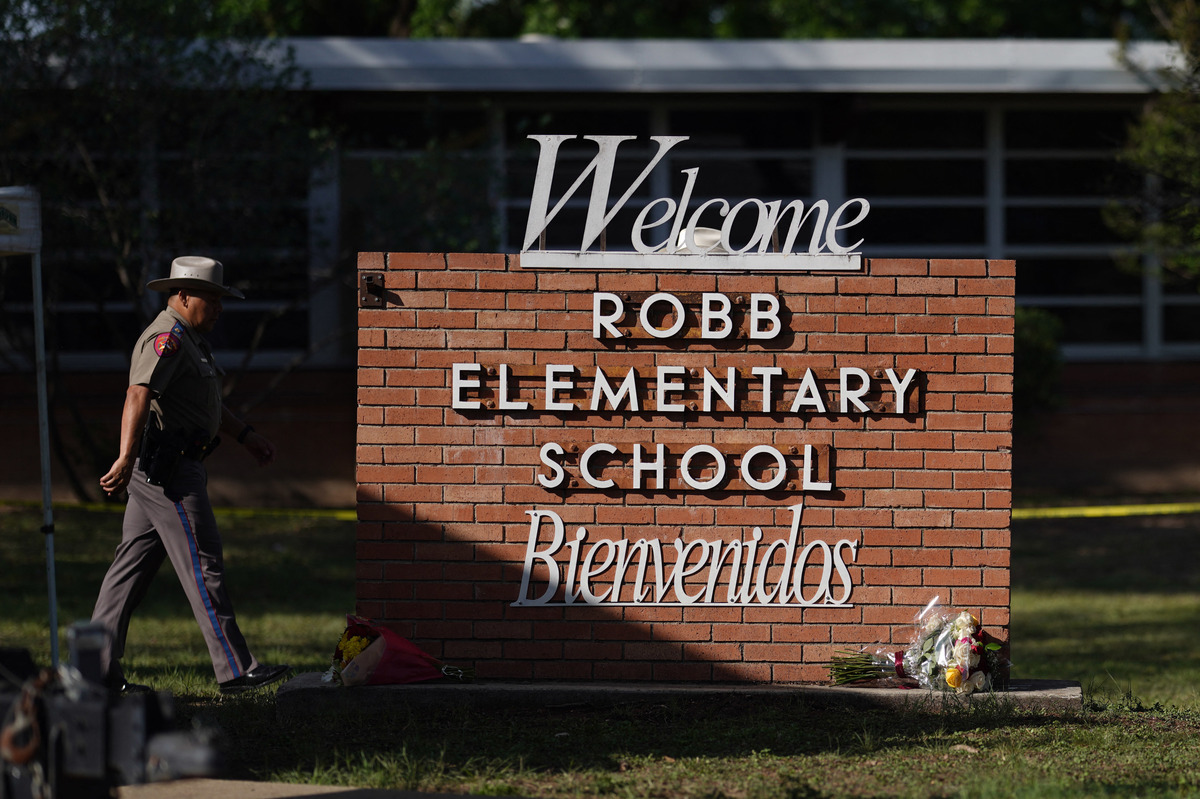 An officer walks outside of Robb Elementary School in Uvalde, Texas, on May 25.

The official narrative of the mass shooting at Robb Elementary School in Uvalde, Texas, has changed drastically since news of an active shooter at the school emerged on May 24. Authorities have repeatedly corrected official statements, after they were contradicted by new information.

"There's been a lot of things that have been said — some are correct, some are incorrect," Texas Gov. Greg Abbott said at a news conference one day after the shooting. Just days later, Abbott said he himself had been "misled" about the police response to the shooting.

He wasn't alone. The shifting details deepen the pain and outrage inflicted by the tragedy in Uvalde, which left 19 children and two teachers dead, and 17 wounded. When they shared news about the investigation, Abbott and others did say their information was preliminary. But the inconsistencies rocked public faith in the police and other institutions, when people were looking to them for reliable information and accountability.

Here's a rundown of how the official story has changed over time:

The police waited before killing the gunman

Questions about the timing of the police assault that killed the gunman were driven by video and witness accounts depicting anguished parents pleading with officers to go after the attacker. Authorities now say the gunman spent nearly an hour and 20 minutes inside the school.

May 25: The day after the shooting, Texas Department of Public Safety Director Steve McCraw — whose agency was by then leading the investigation — said a team of Uvalde police officers and school district officers "immediately breached, because we know as officers, every second's a life."

But moments later, McCraw said it was likely that anywhere from 40 minutes to an hour transpired between the gunman's first shots and him being killed by a team led by a Border Patrol tactical unit. Still, McCraw said, officers "did engage immediately.... [and] saved other kids. They kept him pinned down. And we're very proud of that."

Abbott said at the same news conference, "The reason it was not worse is because law enforcement officials did what they do: They showed amazing courage by running toward gunfire for the singular purpose of trying to save lives. And it is a fact that because of their quick response ... and eliminating the gunman, they were able to save lives – unfortunately, not enough." 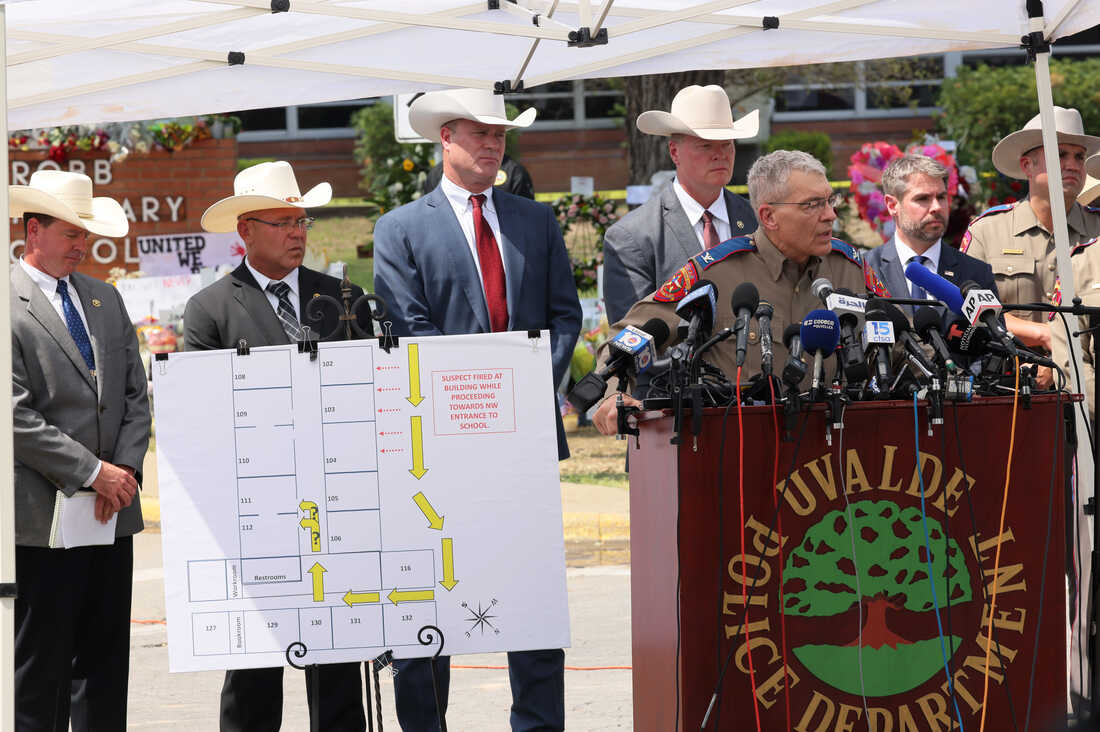 Steven C. McCraw, Director and Colonel of the Texas Department of Public Safety, speaks during a press conference about the mass shooting at Robb Elementary School on May 27 in Uvalde, Texas. Michael M. Santiago/Getty Images hide caption 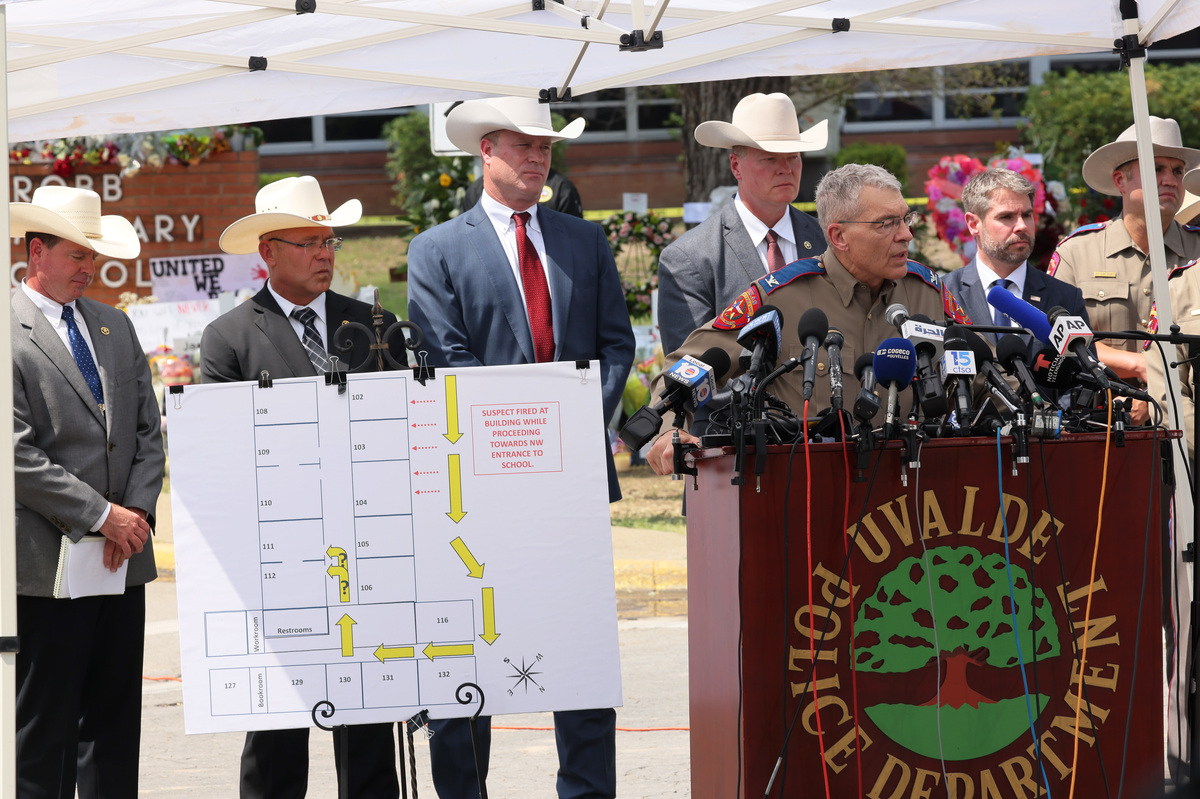 Steven C. McCraw, Director and Colonel of the Texas Department of Public Safety, speaks during a press conference about the mass shooting at Robb Elementary School on May 27 in Uvalde, Texas.

May 27: McCraw gave a detailed timeline of the shooting, speaking outside the school. He delivered a stunning revelation: the incident commander, later confirmed to be school district police chief Pete Arredondo, had stopped treating the situation as an active shooter scenario, judging that the gunman had barricaded himself inside, McCraw said. That left officers waiting for more equipment and backup, as Arredondo believed there were "no risk to other children," the DPS head said.

"From the benefit of hindsight, where I'm sitting now, of course it was not the right decision," McCraw said. "It was the wrong decision, period. There's no excuse for that."

McCraw quoted 911 calls from students inside the school who said some kids were still alive and others were dead — and asking for immediate help. But minute after excruciating minute, that help didn't come.

The first student called at 12:03, McCraw said — 30 minutes after the gunman entered, by his timeline. That's when as many as 19 officers were in the hallway outside the classroom. It wasn't until around 12:50 that a group of federal and local officers went after the gunman, McCraw said. By then, the same student who initially called 911 had called at least four more times.

Aside from the ongoing peril of children trapped by the gunman, McCraw said, the delay may have prevented efforts to save people who were wounded, stating, "It's important for life-saving purposes to immediately get there and render aid."

After McCraw spoke, Abbott said at a separate news conference that his earlier remarks had been a "recitation" of information given to him by the relevant agencies. Acknowledging that part of his account turned out to be inaccurate, Abbott promised that investigators will uncover every fact in the case — including why police followed the strategy they did.

"There are people who deserve answers the most, and those are the families whose lives have been destroyed," the governor said. "They need answers that are accurate, and it is inexcusable that they may have suffered from any inaccurate information whatsoever."

Early accounts described the gunman being challenged by an officer on his way into the school, but that was later corrected. Instead, he walked into the school and found a classroom full of fourth graders and their teachers.

May 25: McCraw said that as the gunman approached, "there was a brave consolidated independent school district resource officer that approached him, engaged him at that time. Gunfire was not exchanged, but the subject was able to make it into the school."

May 26: "It was reported that a school district police officer confronted the suspect that was making entry. Not accurate," Victor Escalon, a Texas DPS regional director, said at a news conference. "He walked in unobstructed initially." Escalon added, "he was not confronted by anybody, to clear the record on that."

May 27: McCraw said the school officer actually drove past the gunman in the parking lot. He blamed the confusion on early interviews, saying police officers are vulnerable to stress like anyone else, and "sometimes witnesses get it wrong."

"The bottom line is that officer was not on-scene, not on campus" before the 911 call came in of a man with a gun, McCraw said. He added that the officer drove to the school and rushed toward a person he thought was the armed man — who turned out to be a teacher.

The officer "drove right by the suspect, who was hunkered down behind a vehicle, where he began shooting at the school," McCraw said.

The gunman entered the school through a rear door, carrying a rifle and a backpack holding ammunition. Because the school sits diagonally on a corner lot, that entrance faces a side street and parking area near where the gunman crashed a truck into a ditch.

May 27: McCraw told journalists the gunman entered Robb Elementary through the back door that was left propped open by a teacher. Moments earlier, he said, the teacher had used the door to get her cellphone.

"That back door was propped open. It wasn't supposed to be propped open, it was supposed to be locked. And certainly the teacher that went back for her cellphone, had propped it open again. So that was an access point that the subject used," McCraw said.

May 31: The teacher goes public, saying through an attorney that she removed a rock used to prop open the push-bar door after seeing the gunman, and that she ensured the door was shut.

The teacher had gone outside to bring food from the parking area into the school before lunch. She then got her phone to call 911 to report the truck crash — and while she was on the phone, the driver ran toward her, carrying an AR-15-style rifle.

Authorities say the gunman entered Robb Elementary School through a rear door near a parking lot — and they have clarified that a teacher did not leave the door propped open. The school is seen here in an aerial view from May 25, the day after the shooting. Jordan Vonderhaar/Getty Images hide caption 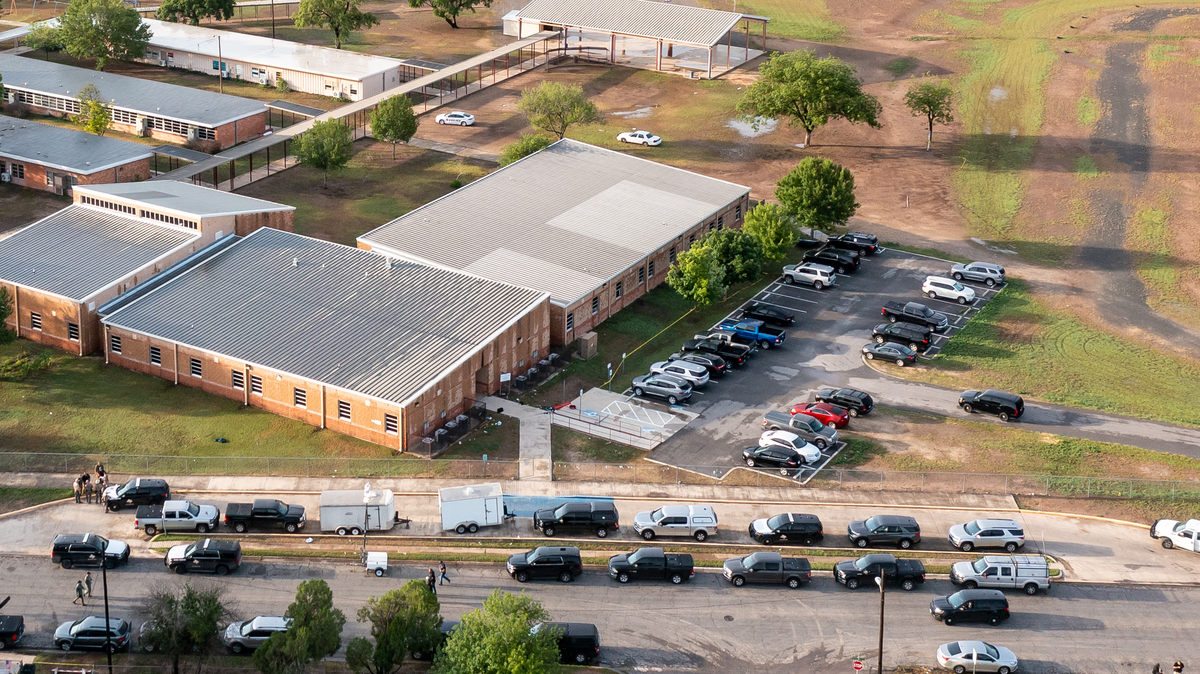 Authorities say the gunman entered Robb Elementary School through a rear door near a parking lot — and they have clarified that a teacher did not leave the door propped open. The school is seen here in an aerial view from May 25, the day after the shooting.

"So she immediately ran back inside, kicked the rock out and slammed the door," her lawyer, Don Flanary, told NPR. The teacher, whose grandson goes to Robb, was "devastated" when McCraw said she left the door propped open, Flanary said. When she contacted DPS about the issue, they affirmed her version of events, citing video recordings, Flanary added.

"We did verify she closed the door," Travis Considine, chief communications officer for Texas DPS, told The Associated Press. He added that the door should have locked automatically when it closed, but it didn't.

The Justice Department is conducting a Critical Incident Review of the Robb Elementary shooting. The department says its goal is to create an "independent account of law enforcement actions and responses that day."

The DOJ especially wants to highlight lessons learned in Uvalde, to identify practices that could help first responders in other communities prepare to deal with active shooter situations in the future.

News of the federal review came after numerous politicians called for an outside analysis of what happened. This week, CLEAT, a large police union in Texas, advised its members to cooperate fully with any government inquiry into the police response to the mass shooting.

"There has been a great deal of false and misleading information in the aftermath of this tragedy," CLEAT stated. "Some of the information came from the very highest levels of government and law enforcement. Sources that Texans once saw as iron-clad and completely reliable have now been proven false."