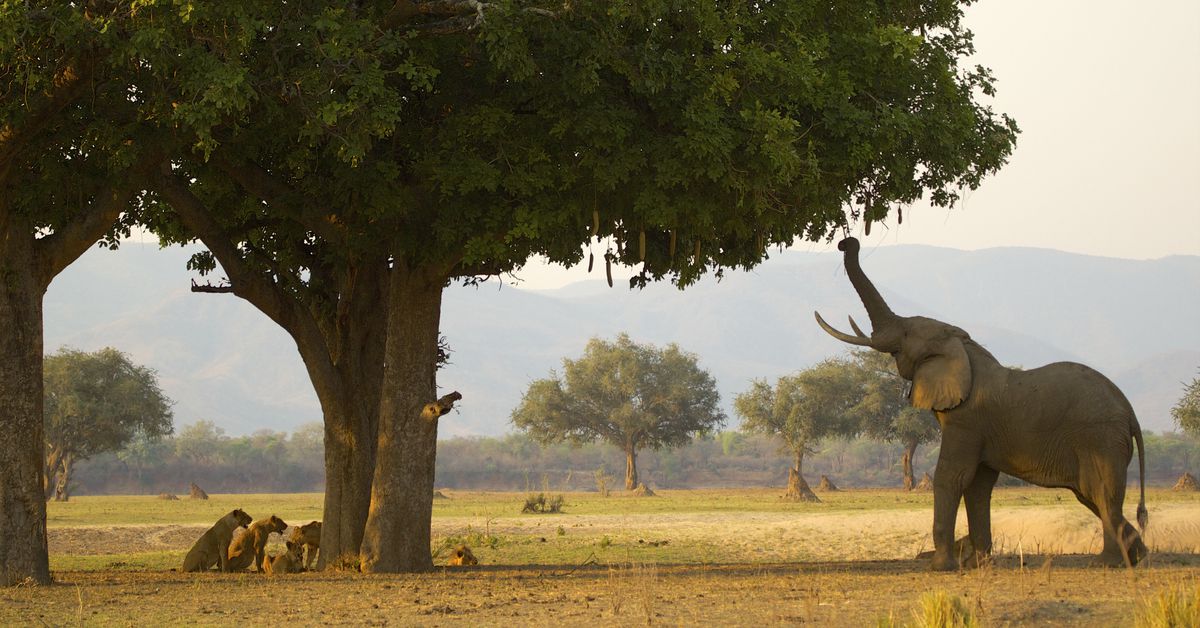 Earth is running low on wildlife. Plants will be next.

The seeds of this story were planted in a steaming pile of elephant dung somewhere in the African savanna. Elephants love to stuff their faces with fruit, and fruit trees like marulas need a way to spread their seeds, so the two species have developed an intimate and symbiotic relationship. A single African savanna elephant is capable of dumping seeds up to 65 kilometers (40 miles) from the site of its feast, making them the most impressive seed transporters in the animal kingdom.

It may not be a luxurious form of travel — via digestive tract, that is — but for roughly half of all plants, animals are a way to branch out over great distances. They can ride in the stomach of a tusked mammal, the pincers of an insect, or on the fur of your dog. Some seeds even hitch rides with multiple animals before arriving at their final destination. 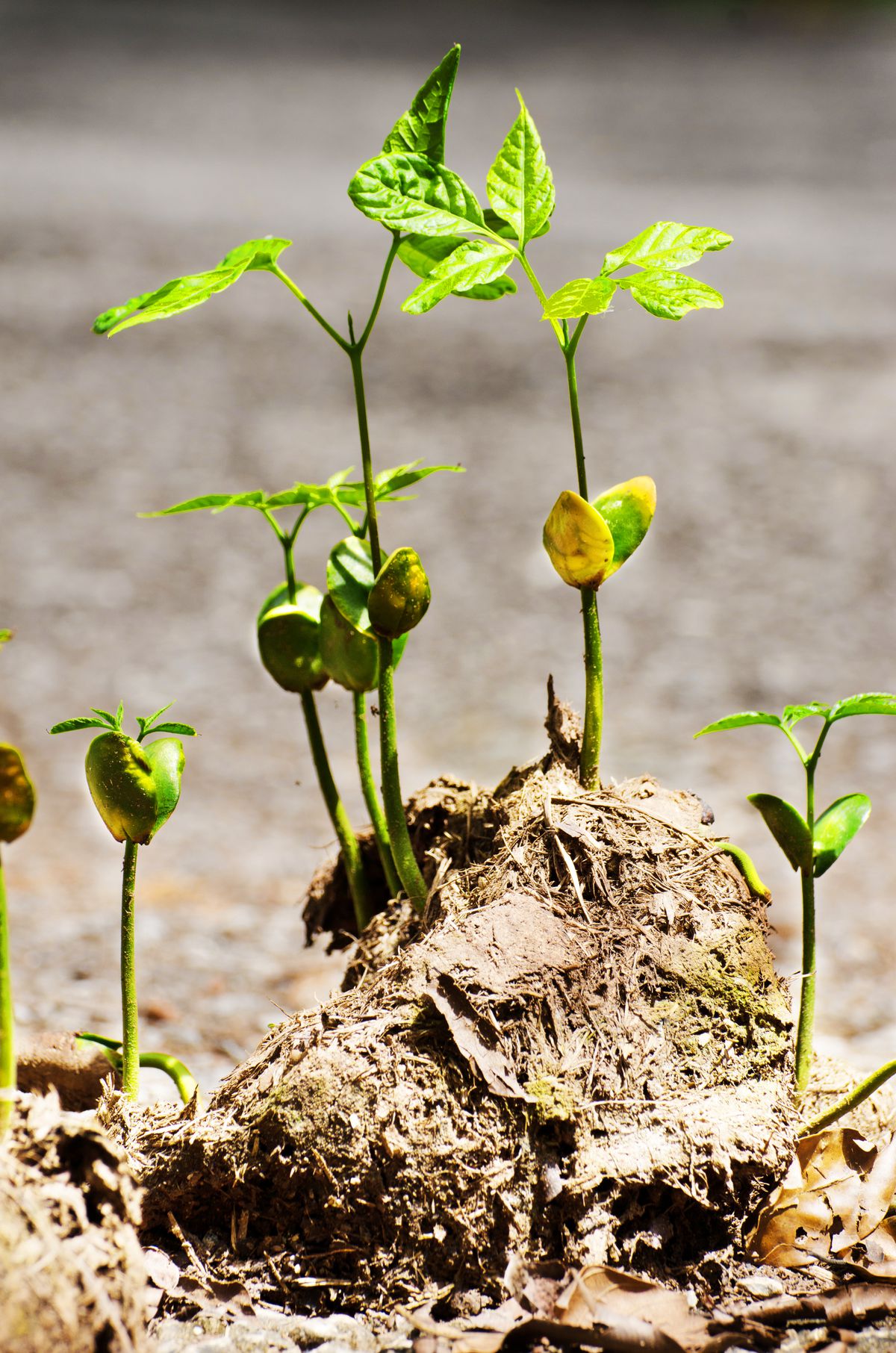 Movement is essential to survival, especially in a changing climate. As plants are scorched by heatwaves and battered by extreme rainfall, their best shot at avoiding extinction can be to spread to new areas where the climate still fits their needs. Research suggests that some plant populations may need to travel kilometers a year to remain in the same conditions in which they evolved — a phenomenon known as “climate tracking.”

But this strategy has a major drawback: It rides on wildlife, and wildlife is disappearing around the world. That means many plants are losing their mode of transportation, according to a new study published in the journal Science, leaving them stranded in areas that are becoming less hospitable to their kind and at a greater risk of dying out.

The ongoing decline of wildlife could also trigger a frightening feedback loop: If some tree and plant species wither because they can no longer hitch a ride on wildlife, that could worsen climate change, which makes it harder for both plants and animals to survive.

When plants and animals die off, it’s not just extinction that should concern us, but the erosion of relationships that evolved over millions of years, scientists told Vox. These ancient bonds between species form the very basis of a healthy ecosystem.

We’re emptying the environment of wildlife

Forests are a lot quieter today than they were centuries ago. There are fewer birds singing for mates, fewer monkeys howling in fig trees, and fewer frogs looking for insects to snag. Over the last 50 years, populations of mammal, bird, amphibian, reptile, and fish species have declined by around 68 percent on average, according to the World Wildlife Fund. Humans have helped erase more than half of all medium-sized and large mammals in Central and South America.

Each animal we lose sends ripples through its ecosystem in unpredictable and profound ways. Plants and animals have finely tuned evolved relationships with their fellow creatures, whether in the form of fruit-loving elephants or birds and bees that pass pollen between flowers. 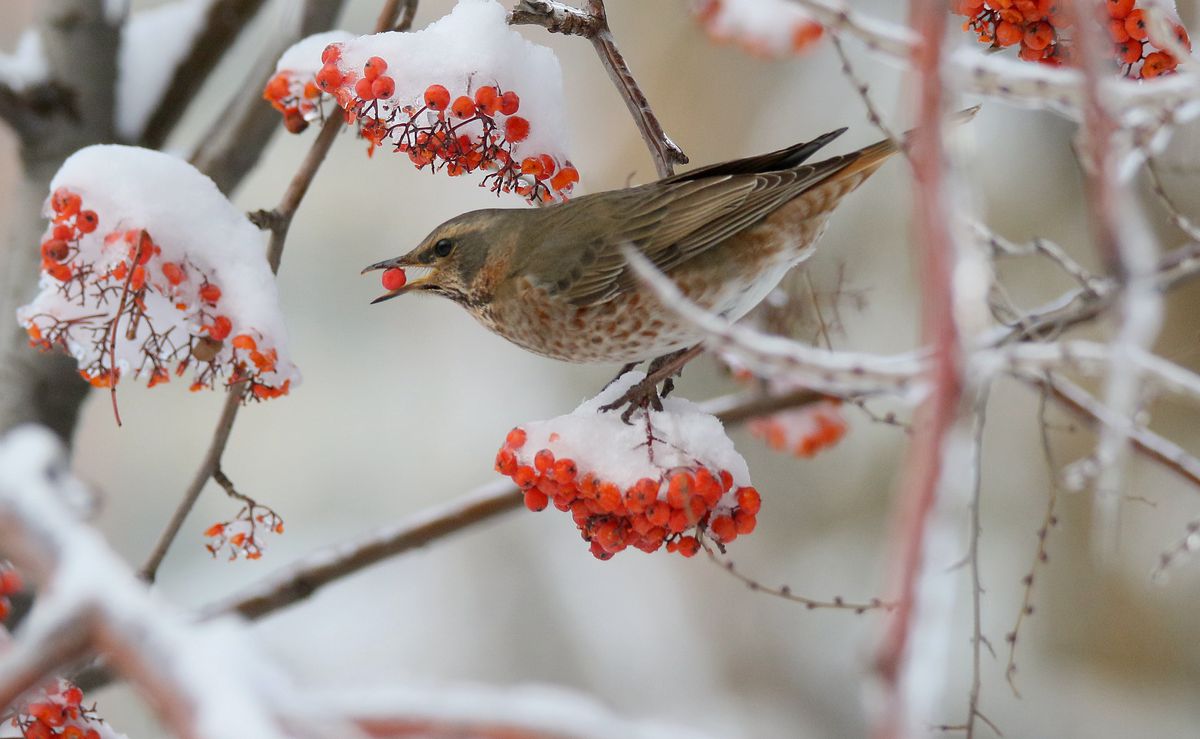 This new research, built on thousands of studies of birds and mammals as well as advanced computer modeling, helps sketch out the impact of those losses. The authors, led by the ecologist Evan Fricke at Rice University, discovered that birds and mammals have suffered so greatly in recent centuries that many plants are utterly unable to spread their seeds like they used to. This problem is worst outside the tropics, the scientists found.

To understand what we still have to lose, the authors also considered what would happen if all birds and mammals that are currently classified as endangered or vulnerable were to disappear. They found that losing these rare animals would hit plants in regions like Southeast Asia and Madagascar especially hard, where endangered wildlife carries much of the burden of distributing seeds over long distances.

Plants and animals are undertaking epic journeys as the planet warms. Atlantic cod and a species of butterfly in Europe, for example, have each migrated more than 200 kilometers (124 miles) in just 10 years or less, National Geographic’s Craig Welch reports. Meanwhile, large numbers of Atlantic mackerel have moved all the way from waters near the UK and Scandinavia to Iceland, spurring geopolitical tensions related to fishing rights. In the US and elsewhere, ticks and other pests are marching into new territory, too.

Plants are likewise finding new places to put down roots. In the last half-century, the line where trees stop growing has moved roughly 150 meters (492 feet) higher in the Altai Mountains of Central and East Asia, where the temperature has increased by as much as 1.7 degrees Celsius. By the end of the century many species of sugar maples, which produce maple syrup, could move north by as much as 200 kilometers, according to the US Forest Service. Not all plants and animals are moving toward the cooler temperatures of the poles; some are chasing rainfall or competing with other species, which is why some mountain plants are actually moving downhill.

Many ecologists believe these climate-driven migrations are a sign of resilience, and that’s what makes this study especially bad news. It will only get harder for plants to survive in a changing climate as more animals disappear. Indeed, the researchers estimate that today 60 percent fewer seeds are capable of spreading far enough to follow the changing climate on average across the globe, compared to a world in which birds and mammals hadn’t been wiped out by humans.

That’s a staggering figure, said Rodolfo Dirzo, a Stanford University ecologist who was not affiliated with the study, and it only accounts for the wildlife we’ve already harmed. If the birds and mammals currently threatened with extinction disappear too, the amount of seeds capable of shifting with the climate would drop by an additional 15 percent, on average, according to the paper.

So far, the breakdown of these fundamental ecological relationships has hit eastern North America and Europe especially hard, the authors write, “as a result of past losses of large mammals that provided long-distance dispersal.” A type of elk, for example, once roamed the eastern US, spreading seeds in its dung and on its fur, and elephant-like mammoths once lived in Europe, North America, and elsewhere. And it doesn’t help that migratory birds in Europe carry the seeds of many plants south, where it’s warmer, not to cooler climates where they might find relief.

What happens when plants get stranded

Plants store carbon dioxide that might otherwise warm the planet. But when they can’t tolerate a particular climate, they die and that can trigger a dangerous cycle, said William Ripple, an ecology professor at Oregon State University.

“It’s a feedback loop,” said Ripple, who was not affiliated with the study. When natural ecosystems break down, he said, “we lose carbon sequestration, and that results in more climate change.” That, in turn, can cause still more plants to perish, especially those that have no way to migrate. Previous research has also shown that poaching tends to limit the growth of big trees that store a lot of carbon, because hunters tend to target larger animals that are capable of spreading large seeds. 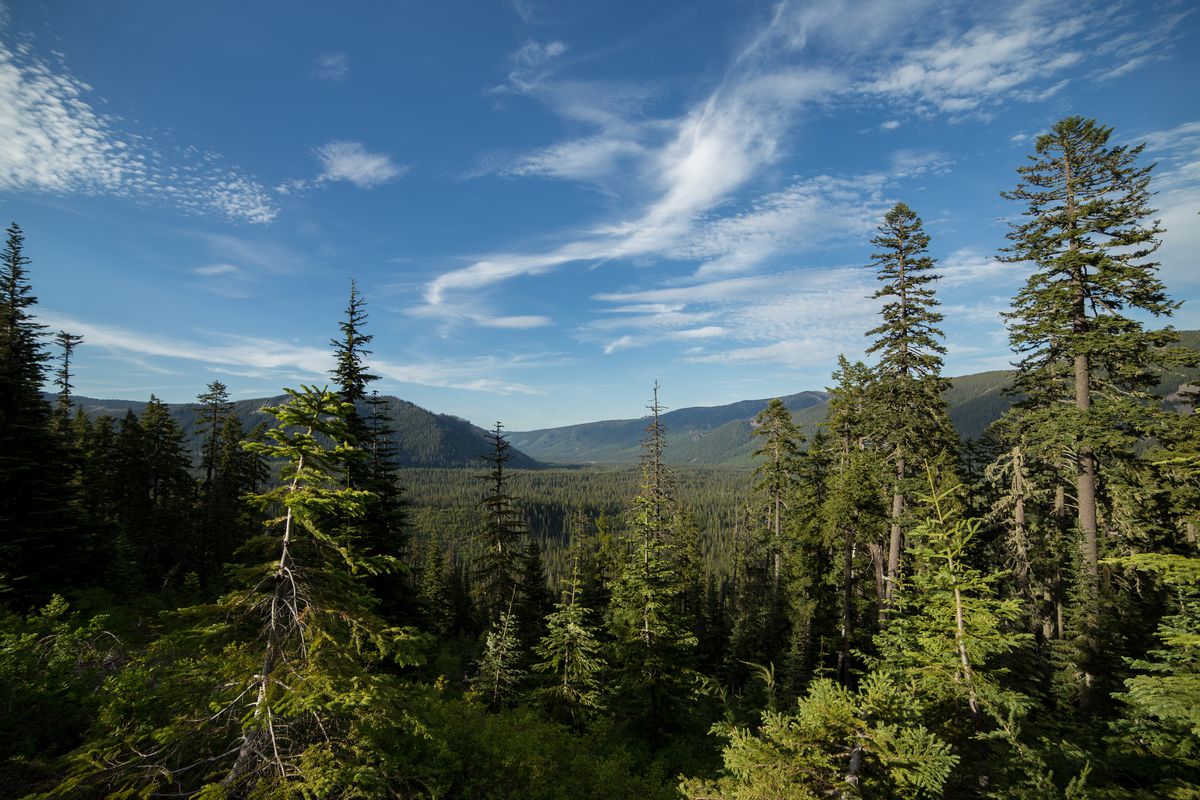 Some forests depend on wildlife to survive. Without it, they may fall victim to the advance of climate change, experts say. Here, the upper Hood River Valley. Getty Images

“We’re only beginning to really quantitatively wrestle with that vicious cycle,” Fricke said.

Which brings us back to the idea of resilience. Forests without animals have a harder time recovering from disturbances like the death of a large tree, Fricke said. In Guam, for example, an island where nearly all native birds have been lost to snakes introduced in the mid-20th century, the physical gaps created by fallen trees aren’t filling in as they should be, he said.

“Usually that’s a hotbed of regeneration that kicks off the self-sustaining process of a forest being a forest,” Fricke said. “What we’re seeing is that those canopy gaps have fewer species of trees growing up in them. They don’t close as quickly.”

“A huge potential for restoration”

While many native animals are in dire straits, other species that humans have introduced to a given area — creatures that are often labeled invasive, such as European starlings in the US — are thriving. So could they take on the role of native animals and help plants migrate?

Yes and no, said Yasmine Antonini, a biologist at the Federal University of Ouro Preto, in Minas Gerais, Brazil. It’s true that new arrivals can help plants disperse their seeds, but not as effectively as native plants, and often with costs to the environment along the way, said Antonini, who was not involved in the research.

In Hawaii, for example, most native forest plants depend on birds to spread their seeds, yet two-thirds of the archipelago’s avian species have gone extinct. Now, introduced birds are the primary dispersers of many native plants there, Sam Case, a doctoral student at the University of Wyoming, writes. The problem is that their beaks didn’t evolve to peck at native plants. Their mouths are too small to transport many of the seeds, and these birds are also dispersing seeds of plants that aren’t native to the islands.

“We should certainly not discount the benefits of nonnative species in the ecosystem where they exist,” Fricke said. “They often aren’t exclusively negative, and sometimes their benefits can outweigh the costs.” But it’s typically a better idea to restore the native species that evolved with the plants, he said.

That’s one area where this study can chart a path for the future. It shows the value of returning wildlife to the landscape — by creating well-connected networks of protected areas, for example. “There’s huge potential for restoration,” Fricke said. While he worries about plants that can no longer move like they used to, “we could go a long way toward reversing that by restoring the seed dispersers we still have.”

Helping even one creature can go a long way, and there are some pretty wonderful examples of this. In the Brazilian savanna, known as the Cerrado, maned wolves — funky creatures that look kind of like foxes on stilts — nosh on fruits called wolf apples that look like green tomatoes and make up as much as half of the wolves’ diet. In exchange for the snack, maned wolves deposit seed-rich poop throughout the savanna, to the delight of nearby dung beetles. The beetles then roll perfectly round balls of feces and will often bury them underground, effectively planting wolf apple seeds in little fertilized packets.

Nature has cultivated all kinds of these remarkable connections between species. If you harm some, that harms others in ripple effects we can’t always predict. But when even one thrives and multiplies, the benefits can reverberate between many plants and animals, up and down the tree of life.