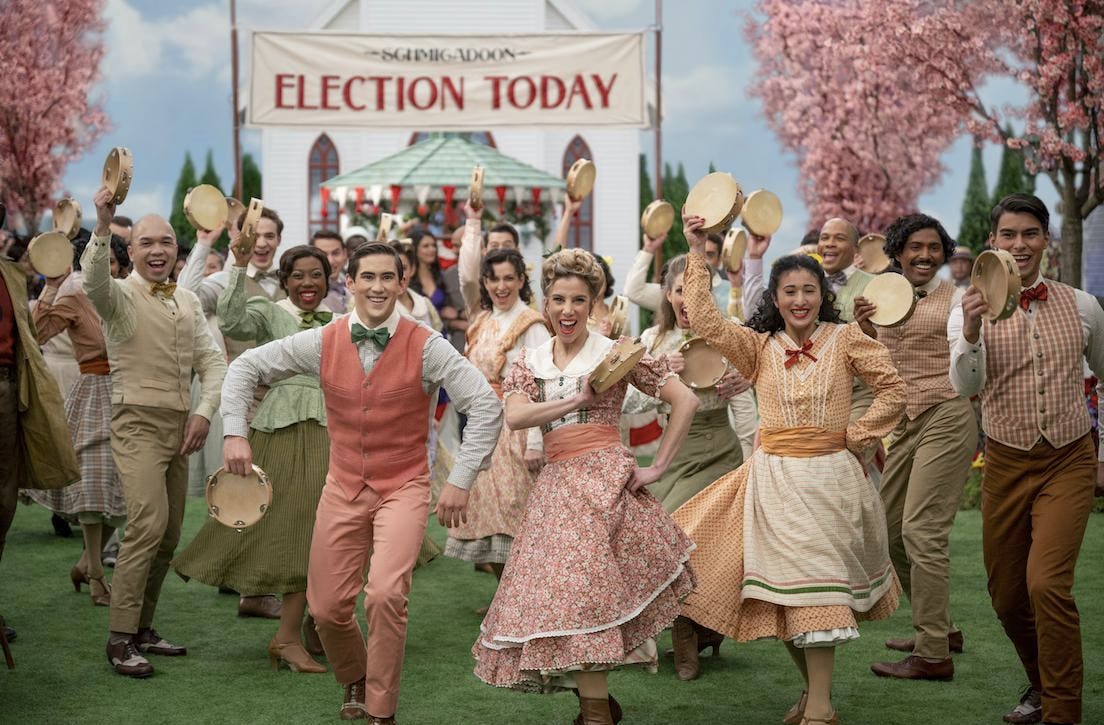 Schmigadoon! is about a couple who embark on a backpacking trip designed to reinvigorate their relationship only to discover a magical town living in a 1940s musical, and they’re shocked to learn that they’re trapped there until they find true love.

The title and narrative of the series are a play on the 1947 musical Brigadoon, which tells the story of two American tourists who stumble upon a mysterious Scottish village that appears for only one day every 100 years.

The idea for Schmigadoon! came from Cinco Paul, who also series as executive producer/writer on the series. He says that he came up with the concept over 20 years ago but wasn’t sure exactly what it was or how to move forward with it.

“It was just an idea I’d had for a long time, but the big key was it had always been two guys stumbling upon a musical, and then when I said, ‘Let’s make it a couple, and they’re stuck there until they can find true love,’ that’s when it really clicked for me,” explains Paul.

The couple, Josh and Melissa, are played by Keegan-Michael Key and Cecily Strong.

Paul says that both actors can really sing, and laughs a bit as he points out that Key may have been a bit too enthusiastic about hitting the high notes. “He has a great voice and we were constantly telling him to hold back. He just wanted to burst into song constantly and we just said, ‘Keegan, no. It’s not time.’”

Actually, Key has shown his musical chops in other on-screen productions, including The Prom and Jingle Jangle.

“We wanted people to sing live on the set and dance, so, we really wanted to get a wide variety of like real musical theater talent. It was very important that these people have legit chops so that they could pull that off,” says Paul.

In addition to this, Strong says that it was, “really important that we have Broadway stars in this, because walking around New York [you see] all of the theaters [are currently] shuttered. It’s sad to see Broadway that way [and with this show] we got to make musical theatre during this time.”

She adds, “For me, as someone who loves musicals, it was a dream come true. I was like a kid in a candy shop every day [working on this].”

While the series is billed as being a parody of 1940s musicals, there is an inherent question as to whether, given the racial reckoning that is being experienced today, if a parody is the right response in addressing some of the controversial elements of the original material.

Discussing this Key says, “There is this mystical overtone that the people that live in this town just happen to be of different racial backgrounds. They just happen to exist there in a certain amount of harmony. So, it’s funny; parody is a term that we could use, but also I guess in a manner of speaking, [this is] a deconstruction of the musical while we're also respecting the musical.”

Paul jumps in to say, “I'll add that it was always very important to us that our ensemble didn't look like the ensembles in those [old shows], that it looked like America today and in many ways, I think Schmigadoon! is an aspirational place. It’s a place that we wish we were living in, So, I think we're celebrating musicals, but like Keegan said, we're using this as an opportunity to deconstruct them and comment on things that were maybe problematic [before], and make them better. And I think that was a lot of what we were doing with this show is trying to focus on the positive.”

Strong says it wasn’t the intention of the series to specifically analyze what’s happened in the past, stating, “We're having fun with musical tropes. But,” she adds, “I think that the racism in America [makes] everything kind of like a horror film right now, and that's why we do comedy. That's why we spread joy. That's the purpose of this show.”

Viewers who don’t have any expertise in the musical theater genre needn’t worry about getting into Schmigadoon!, says Paul. “Everybody understands, basically, what a musical is, and Keegan’s character, Josh, hates musicals - wants nothing to do with them and doesn’t know anything about them - so he’s the way in for [everybody].”

Strong adds, “I think this is definitely a show where we’re not asking anybody to go in knowing everything that happens in Brigadoon or Oklahoma or even having seen those shows.”

But, Paul reveals that there are some easter eggs hidden in the narrative for hardcore musical theater fans. “There are quite a few,” he says.

Above all else, Paul says that Schmigadoon! is “a love letter to Golden Age musicals from start to finish.”

The series will premiere with the first two episodes, followed by one new episode weekly, every Friday through August 13th.