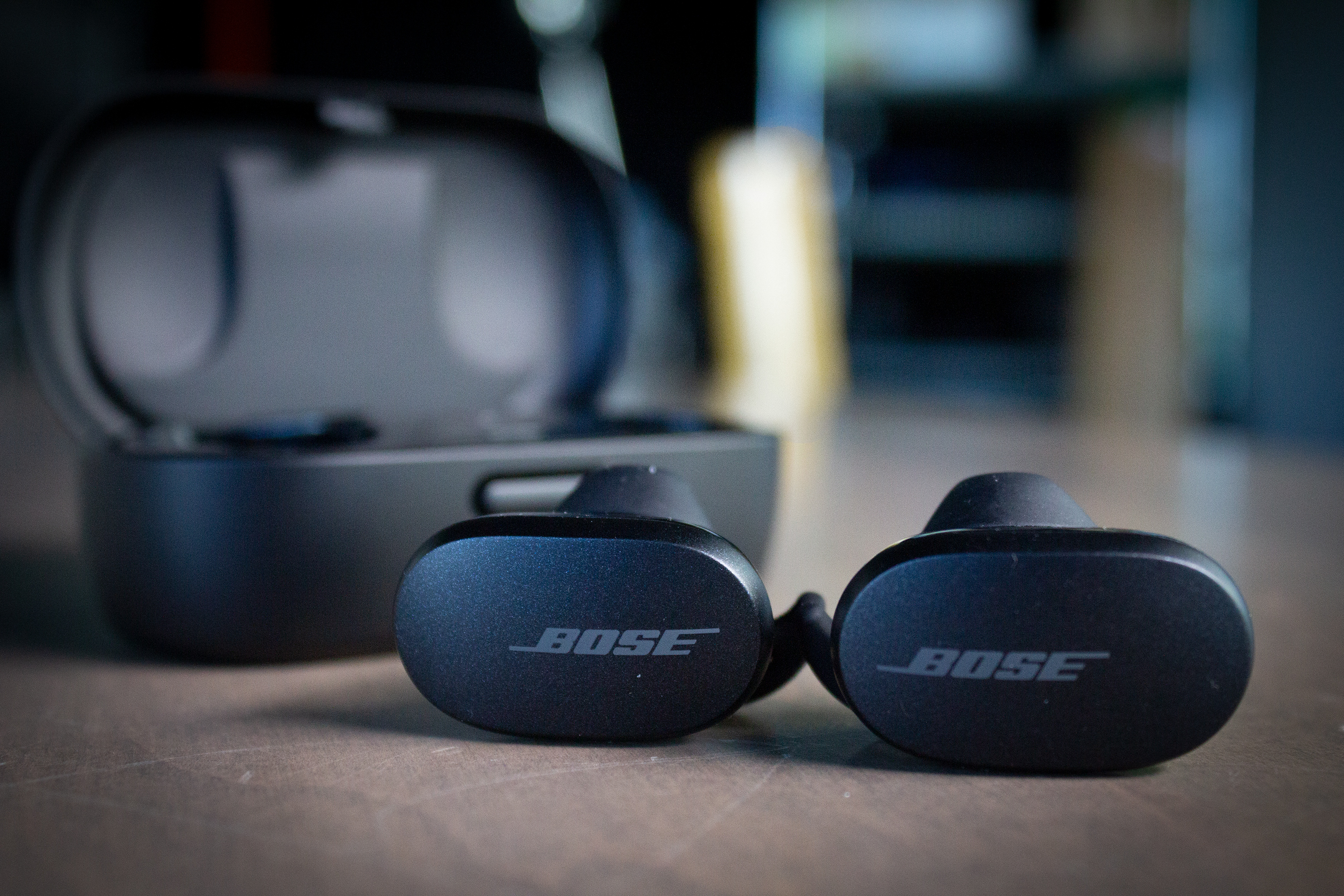 For noise canceling, the Bose QuietComfort Earbuds should be among the first earbuds you look at. They silence noisy conditions well both at home and on the go, while also providing excellent audio for music playback and phone calls. Their primary weakness is size—both the earbuds and the charging case are large, and the latter doesn’t comfortably fit into pockets. But if you can live with that sacrifice, you’ll enjoy these stellar buds.

Bose is known for noise canceling. Its over-the-ear cans have often set the bar for silencing noisy backgrounds. So it’s no surprise that the company’s QuietComfort Earbuds continue that reputation.

Launched a little over a year ago, these buds hit high marks for active noise canceling (ANC)—enough so that travelers should definitely consider them first. They deliver on sound quality and ANC in a way that makes them tough to beat. Even as a more expensive pair of buds, the price isn’t a deterrent. Rather, the reason someone would choose a rival product like the Jabra 85t or Sony WF-1000XM4 boils down to personal preferences in audio profiles and portability. 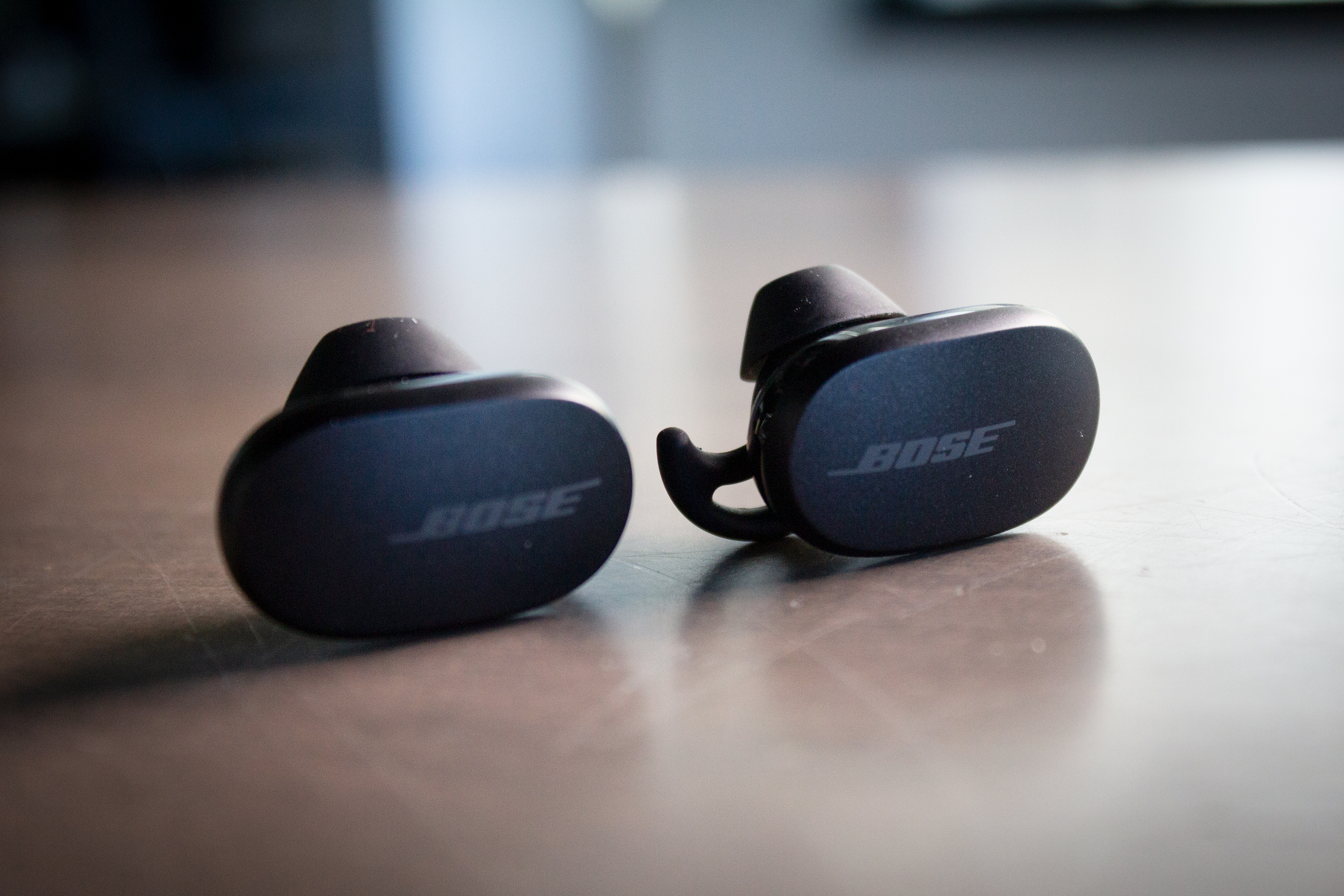 Everything about the Bose QuietComfort Earbuds is huge. The buds themselves seem enormous compared to competitors—even when placed side-by-side with the Sony WF-1000XM4, which runs a little thick.

Strangely, they didn’t look comically large when worn, even despite my smaller frame. The QuietComfort seems purposefully chunky, rather than awkwardly so, and the color versions (white, beige, and blue) have an unexpected elegance. These buds also feel lightweight in ear, despite their proportions.

This bigger size does mean that these earbuds are better suited for larger bodies. Three different ear tips are included in the box (Small, Medium, and Large); I had to switch out the medium tips, the default, to the small. Typically medium ear tips works best for me, but not this time. On the opposite end of the scale, a friend who borders on XL tips found the large to be just right. Small-boned people may think this a deal-breaker, and it could be. However, Bose has been sampling some alternative tip sizes to U.S. and Canadian customers. If you live in those areas, contact customer service. You may be able to get your hands on XS, Small/Medium, and Medium/Large tips.

Once I found a tip that fit, the seal was excellent. These earbuds felt so secure that I kept them in around water despite their IPX4 rating, which only protects against splashes and not full submersion. The labeling makes it easy to identify right and left buds. 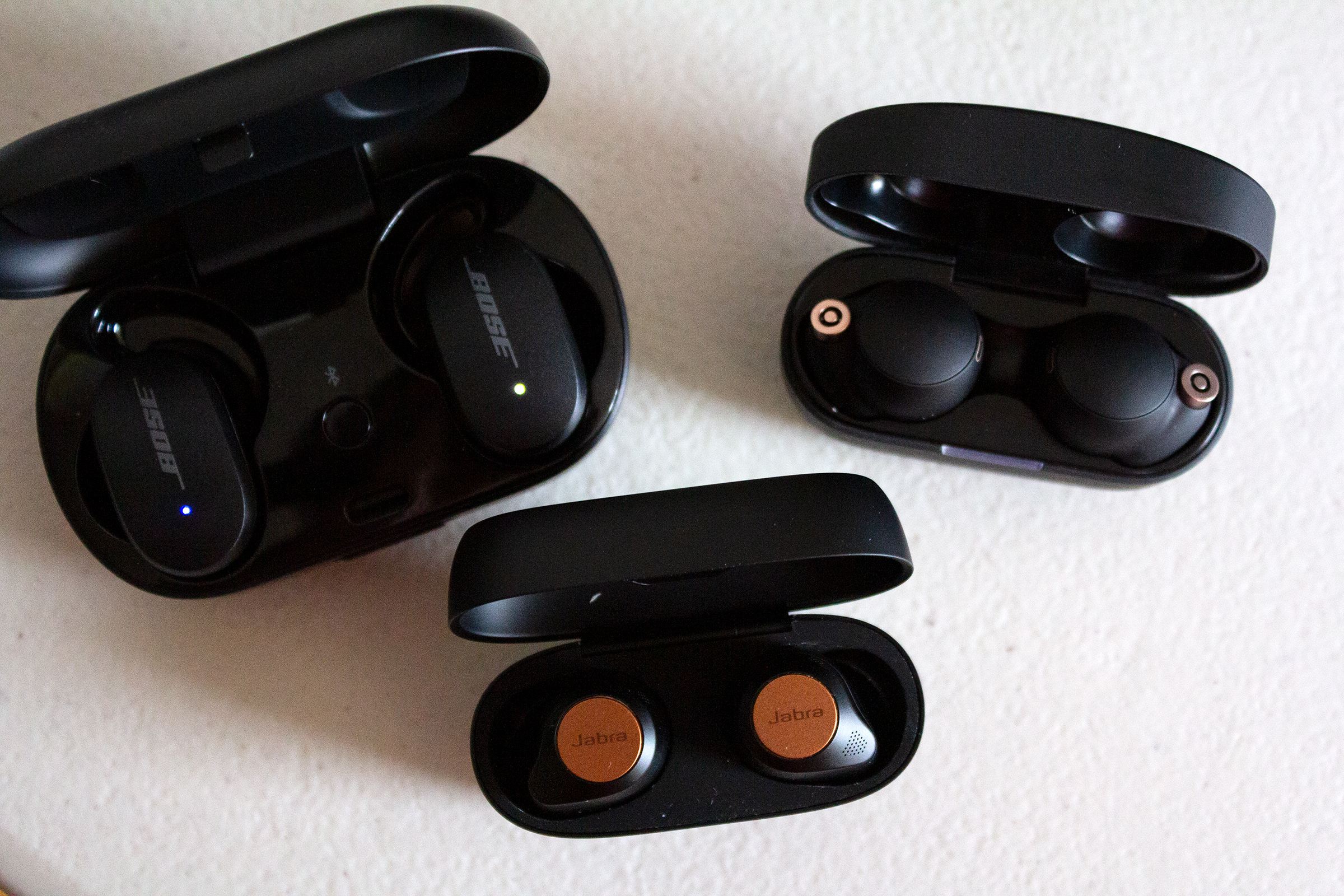 The Bose QuietComfort Earbuds’ charging case next to the Jabra 85t (center) and Sony WF-1000XM4 (right) for size comparison. During my review of the QuietComfort, I sometimes had to carry a purse just to better accommodate its chonker of a case.

The charging case for the Bose QuietComfort Earbuds borders on ridiculously large. It’s almost double the size of competitors’ cases, particularly the Jabra 85t and the Sony WF-1000XM4, two rivals that go toe-to-toe with these buds. Carrying these in a jacket pocket or a pants pocket isn’t comfortable—I relegated them to my backpack. The kicker is that the charging case’s generous measurements don’t translate into extra battery life, as we’ll discuss below.

You can make manual adjustments to any of the presets for custom EQ settings. The interface allows a range of 10 ticks up or down for Bass, Mid, and Treble.

People who love neutral sound signatures should enjoy the Bose QuietComfort Earbuds’ default profile. Audio is well-balanced, with every part of the range clear and represented. Music comes through extremely clean and precise as a result—in fact, so much so that it can seem almost sterile or joyless to ears accustomed to warmer profiles. Make no mistake, you can get good bass from these earbuds, but for anyone used to Beats headphones, the QuietComfort Earbuds may feel too crisp.

Even with different EQ settings applied, that exactness is consistent. You can apply your own adjustments, or choose from one of the four default profiles (bass boost, bass reducer, treble boost, or treble reducer). No matter what you dial up or ease down, the precision remains. Being able to use such straightforward controls to quickly draw out more of the lows, mids, or highs is gratifying.

For voice and video calls, incoming audio sounds clear, as well. It can leech some of the warmth from low voices though, even while the depth remains. Using the earbuds for speaking isn’t quite as good, as the audio has a hollow quality—similar to that of AirPods. (One person commented that I sounded like I was on a smartphone with a very good speakerphone mode.) But no one I spoke with had trouble making out what I was saying. I also didn’t mind having sidetone on (the ability to hear myself speaking, or as Bose calls it, “Self Voice”), which is more than I can say about other earbuds with the same feature. With rival buds, I’ve sometimes wanted to switch it off immediately.

Volume across all types of audio can go quite high. To stay around my preferred volume (loud enough to block normal conversation with noise-canceling on), I usually was in the low 30-percent range. On Windows PCs, you can get even louder than that if you switch from headphone mode to headset mode. (You generally have to use the latter in voice calls.) In headset mode, I dropped to 9 percent for adequate volume.

Quiet and Aware modes are fixed modes in the noise canceling settings. You can add up to two additional custom modes.

As stated already, Bose has a reputation for excellent active noise canceling, and justly so. Of the noise-canceling buds that have passed through my hands, the QuietComfort Earbuds stand above all. The Jabra 85t comes awfully close, but Bose still excels. With ANC at full strength and no music playing, it cut street noise on a moderately busy city road by more than half. (The rough estimate I’d give is around 65 percent.) Add on a little bit of music and the world fades away. The same applies to TV audio or prolonged conversations in the background.

The noise canceling controls are very streamlined. You get up to four different profiles, with Quiet and Aware modes as preset defaults. Quiet mode cranks up the noise canceling to the max, with no adjustments possible. Aware mode is the reverse—it allows in ambient sound, but with a unique twist: If a loud noise suddenly occurs, the earbuds will kick on enough noise canceling to partially muffle it. I didn’t expect to like Aware mode’s special trick, but it keeps music at a fairly even, normalized volume. The reaction to blaring sound engages and disengages pretty smoothly, too.

The other two profiles are completely user set—you can opt to create them or not. Whatever exists will be in the rotation when you touch your left earbud to switch between modes. There are 10 different levels of noise cancellation to choose from when creating a custom profile.

Unlike with other earbuds, you can’t turn off active processing on the Bose QuietComfort Earbuds to help conserve battery life. The microphones are working at all times to either block or pipe in environmental audio. The upside of this fact is that Bose’s engineers seem to have programmed the mics to filter out the sound of fabric brushing against the buds, so you can wear hoodies without driving yourself crazy. 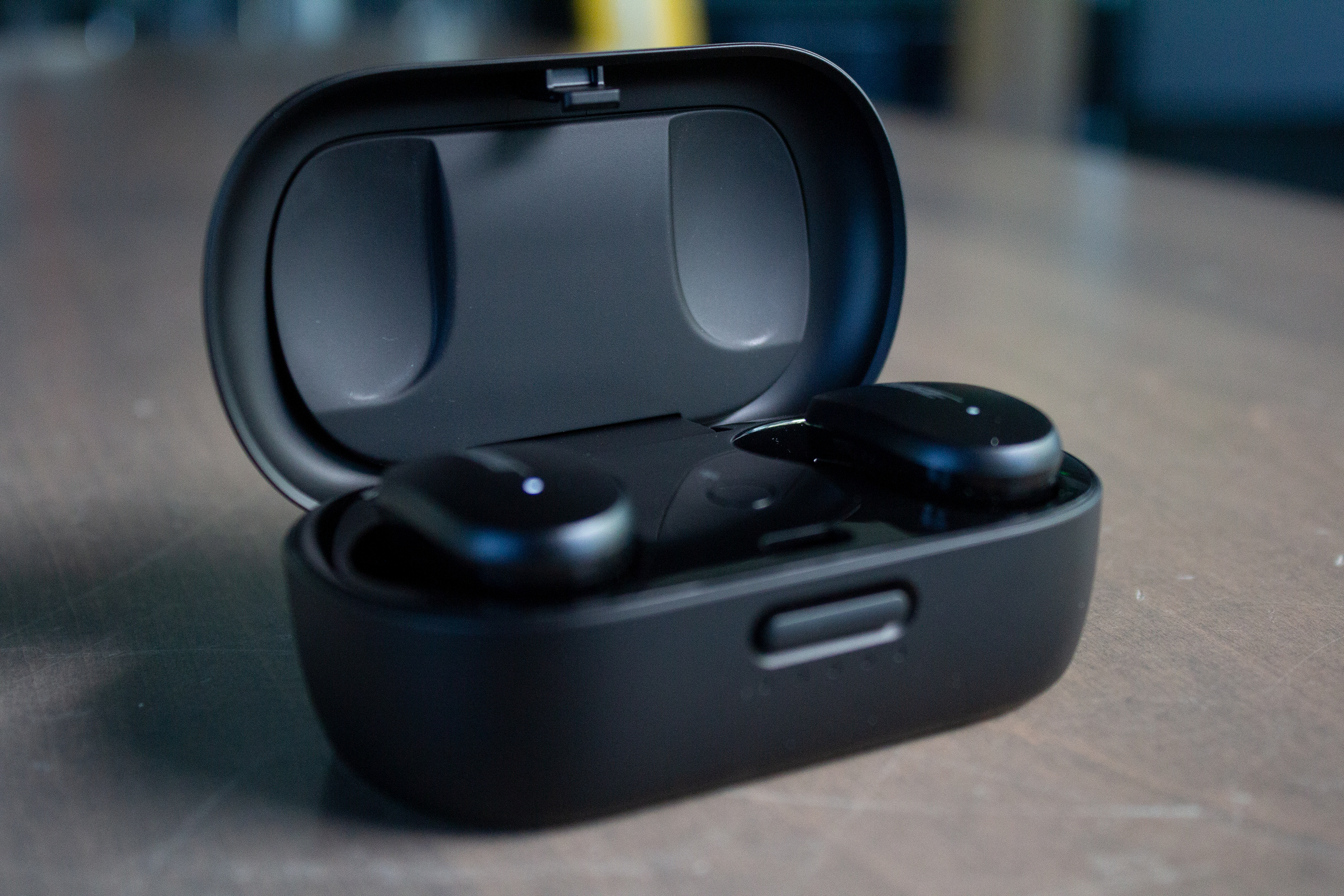 Dropping the earbuds into the charging case for 15 minutes can provide up to two hours of playback.

Battery life on the Bose QuietComfort earbuds is rated at 6 hours, similar to other rivals. I usually got closer to 5.5 hours of continuous music playback with noise canceling cranked all the way up. Given the size of these earbuds, it’s a bit puzzling that they don’t last the full 6 hours. In fact, the smaller Sony WF-1000XM4 outdoes them handily with up to 8 hours of music playback.

Also confounding is the low number of charges provided by the mammoth charging case. Despite its size, it has a rating of just two charges, and generally I only eked out a smidge more than that. Given this case’s bulk, you’d expect at least three charges.

The QuietComfort does have a couple of useful battery-related features, though. First is wireless charging of the case, which isn’t unusual among ANC earbuds of this class, but handy nonetheless. You can also drop depleted earbuds into the case for 15 minutes and get up to two hours of playback. Fully charging the earbuds takes two hours, and the case takes three hours over a USB-C cable.

The main screen of the Bose Music app puts the most-used settings right at your fingertips.

Pairing with the Bose QuietComfort earbuds is a snap. You can pair multiple devices to these earbuds, but only use one at a time. Switching between those devices doesn’t require much effort—typically you can just connect from your active device, and it’ll take over.

When connected, these earbuds maintain their Bluetooth signal pretty well, even in multi-story buildings. I could often keep the connection through distances that spanned multiple walls or even while on different floors.

The touch controls on the earbuds aren’t overly sensitive, thankfully. You can brush against them without causing accidental inputs, but they still immediately register deliberate taps and swipes. The only real disappointment about the controls is the lack of customization. On both buds, you can either press and hold for one command, or double-tap for another. When not in a call, the right bud connects you to your phone’s digital assistant and pauses music playback, while the left bud lets you change your noise canceling mode and another command of your choice. Customizing that one left bud command is one of just three options: battery level, skipping forward a track, or going back a track.

I would have liked the ability to customize all commands (or at least, rotate them around), plus have a set for triple taps. The less-expensive Jabra 85t is more generous in this regard.

Volume and phone calls are controlled solely from the right bud—the former by swipes, the latter by a long press or taps. For calls, you must use the right bud at minimum, as that’s where the mic is. (For music, you can use either left or right in single-bud mode.) When you take off the buds, they go into Standby mode after 20 minutes.

Installing the Bose Music companion app is optional, but you need it to get the most out of the QuietComfort Earbuds. I like the interface—the most-often used settings are right on the main screen, but Bose smartly added them in the full settings interface, too. You don’t need to go in and out of menus to access everything. And while the controls are simplified, they’re attractive and polished, easy to navigate, and never make tuning the buds feel like a chore.

For noise canceling, the Bose QuietComfort Earbuds should be one of the first set of earbuds you look at. (The other is the Jabra 85t, which has nearly the same level of ANC and also costs less.) They make travel much less stressful, and even for those glued to a chair in a work-from-home setup, they work for blocking out noisy housemates or neighbors. For strolls around the neighborhood, they don’t pack down as well, but if you can live with that sacrifice, you’ll enjoy excellent performance for audio and noise canceling.

Note: When you purchase something after clicking links in our articles, we may earn a small commission. Read our affiliate link policy for more details.