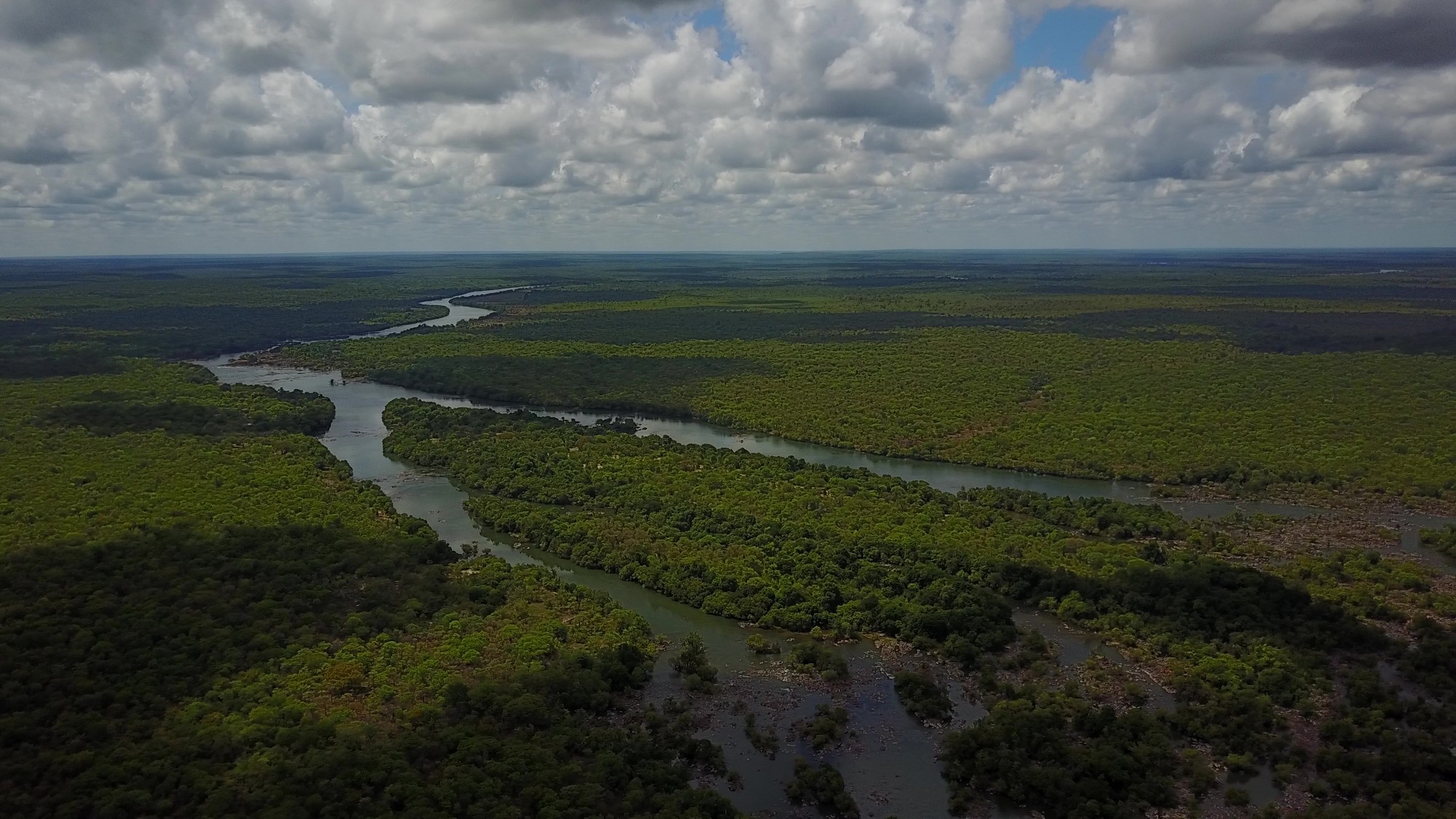 A Walk in the Park: 100 Miles Across the Wilds of Kafue National Park

In the twilight before sunrise we came upon two African wild dogs harassing a hyena. In their playful way, they were trying to take back an impala kill that the hyena had scavenged for its own breakfast. Named Tripod, this thief had three good legs, the lower part of a front fourth was lost to a poacher’s snare. For Tripod, this handicap proved no hindrance as he wrestled the prize from the dogs. 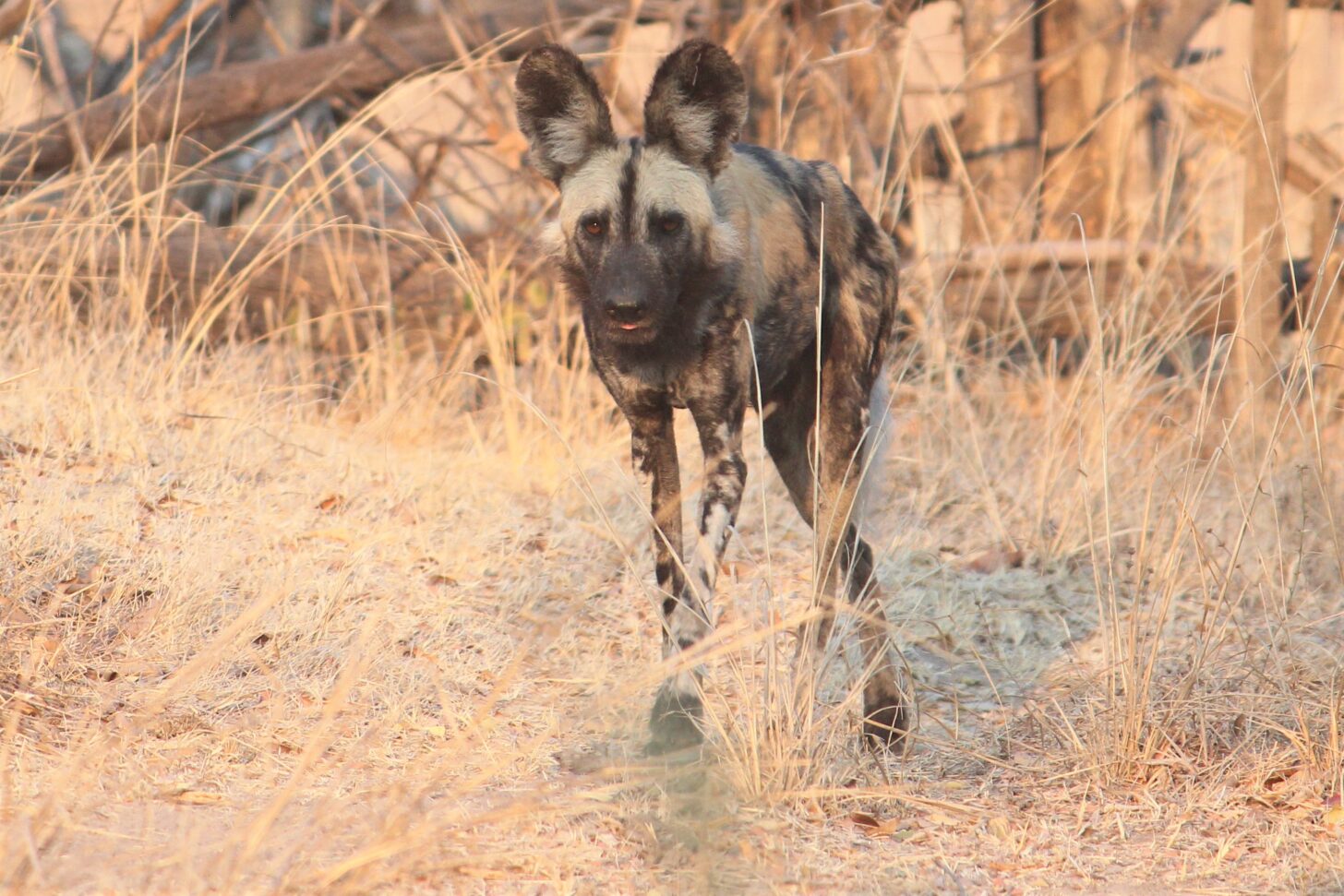 We encountered African wild dogs on the first day of our journey.

My hiking partner and I took this sighting as a positive omen for the days to come.

It was August, the tail end of the Zambian winter, and about 46 °F as the sun appeared. Throwing our packs (fully packed, my Hyperlight Mountain Gear Southwest 2400 weighed less than nine pounds) in the back of a Toyota Land Cruiser, we bounced our way down a dirt track toward the Nalusanga Gate of one of Africa’s largest wildernesses, Kafue National Park. Waiting there to join us were Lipoko and Yuram, Wildlife Police Officers (WPOs or scouts) from the Zambian Department of National Parks and Wildlife. Lipoko, a hulk of a man we called Chipembeli (or Rhinoceros in the local language) was a 12-year veteran and expert tracker from a nearby village. Yuram was a new WPO recruit. He came from the capital city Lusaka and was learning from Lipoko. With these guides at the ready, we unloaded our gear, filled our water bottles, and took our first steps into the trackless Kafue. 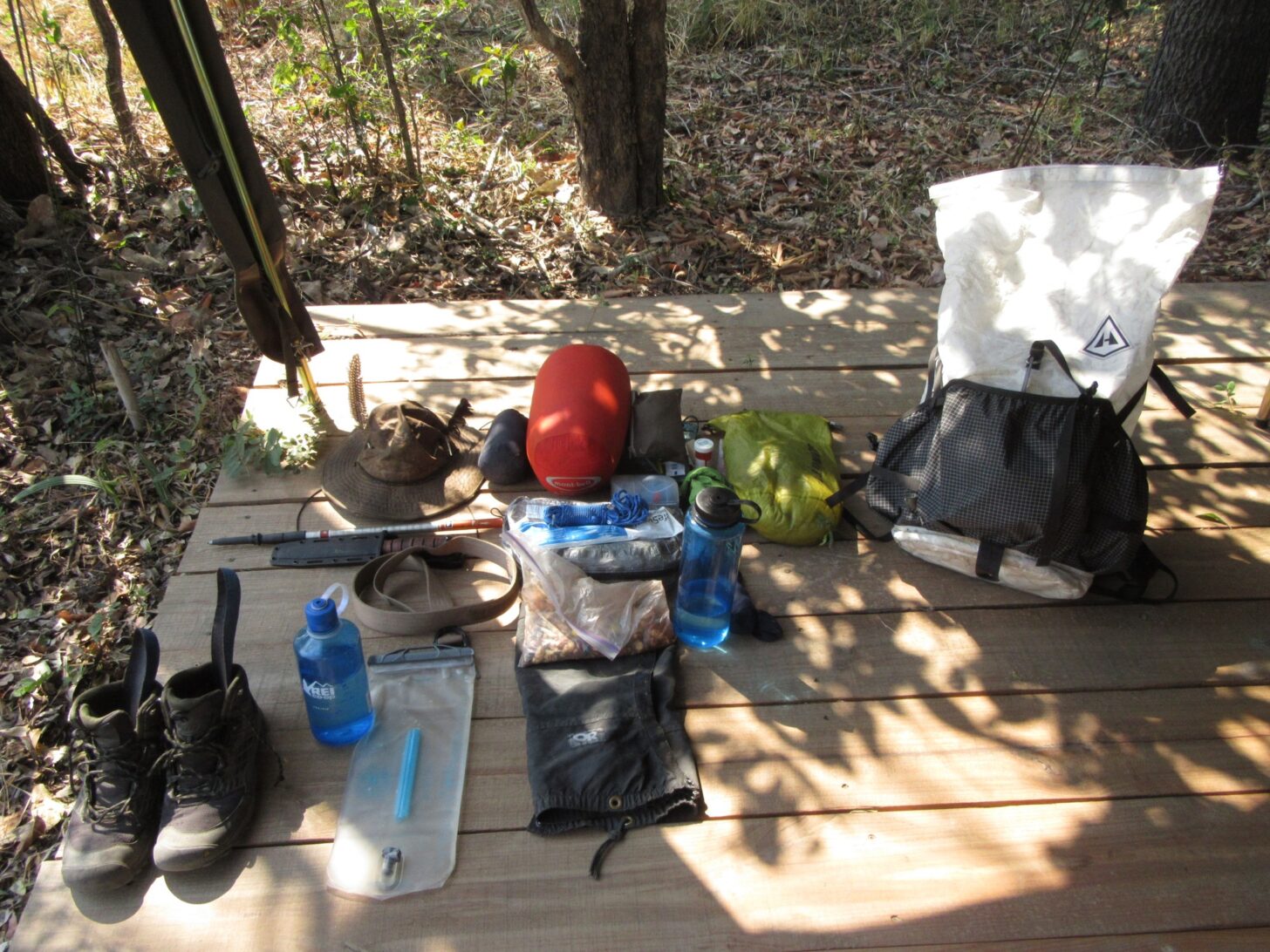 I’m not a thrill seeker. I don’t free-climb thousands of feet on an open rock face or wingsuit off a perfectly good mountain! While I enjoy a good time as much as anyone, I’m no adrenalin junkie. Yet, there I was setting off to bushwhack 100 miles across one of Africa’s classic parks, full of predators – animal and human. We were about to disappear into a landscape as large as some countries.

Along with my Zambian companion Phil Jeffery, co-owner of a safari camp and Musekese Conservation (MC), we began pushing our way through the harsh terrain, working northwest across Kafue’s northern tier. It was us, the bush – and of course the animals. Elephants, lions and snakes lay ahead – along with armed criminals aiming to slay whatever choice animals they could find. How many activities need not one, but two armed guards? 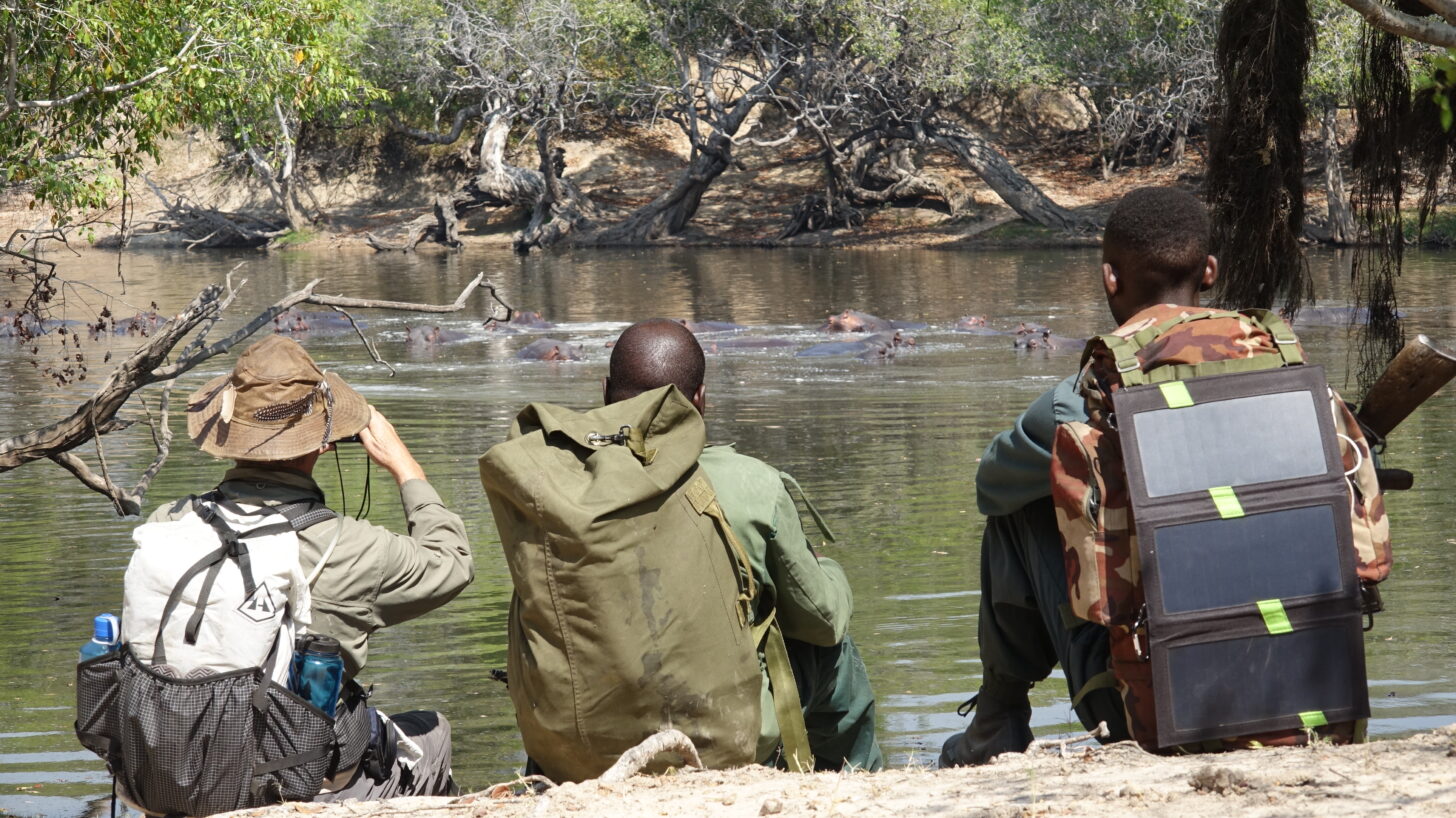 Some of the members of our trip.

Yes, we did this for the adventure, but our real motivation was to promote MC’s wildlife conservation efforts, as it didn’t take long before adventure caught up with us.

At about 4,457, Mutumbwe is the highest point in the park. Steep-sided, narrow, and rock-faced, the ridge sits almost 1000 feet higher than the surrounding plain. After six hours of hiking through the rising heat, we arrived at Mutumbwe’s base. Not knowing how to tackle this giant, we ascended what seemed to be a gentle slope. Before long, we were clambering over boulders, sharp rocks and soot-covered bush. Dropping our packs, we resorted to a hand-over-hand struggle up the jagged rocks, determined to reach the crest before darkness descended. 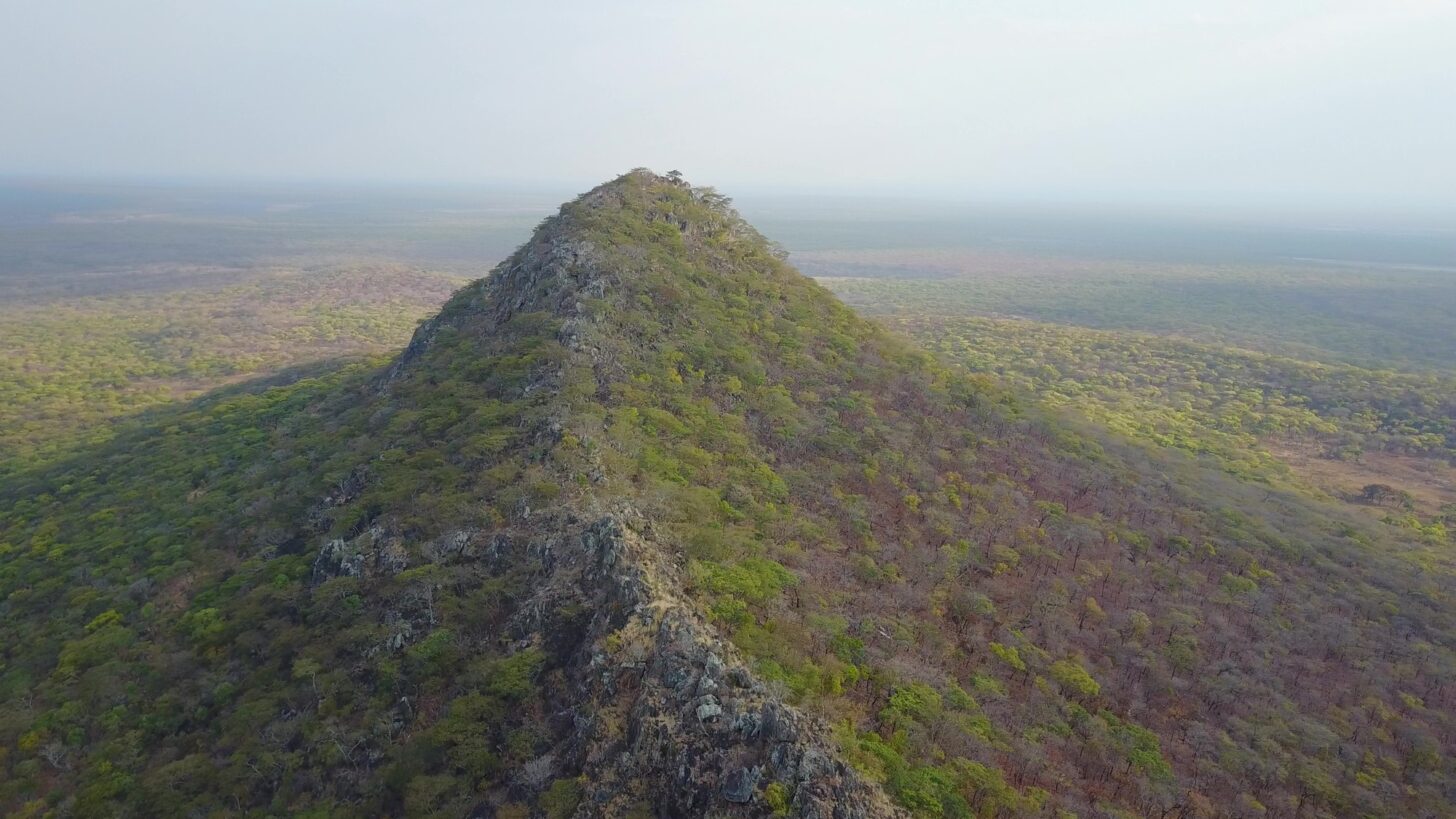 The Mutumbwe ridge was the high point of our journey.

Squeezing through tight gaps and clinging to roots and boulders, we managed to reach a prominent cliff. This would be our highest point for the day as the steep slope ahead made reaching the pinnacle before dark too risky. We enjoyed a 360-degree view over what seemed like a never-ending landscape of trees.

After spending our first night under the endless stars, we got up early the next morning, finished our coffee, loaded our packs, and headed out before the heat crept in. It wasn’t long before we saw signs of bush pig, warthog, aardvark, elephant, and various antelope. Following a lone bull elephant’s trail, we pushed our way through head-high grass that transitioned to Miombo woodlands, a thornless, deciduous forest landscape that covers much of Zambia. The light Miombo canopy tends to be open and sparsely shaded with tall grasses and low shrubs.

Poachers snares and traps are deadly, silent, and indiscriminate. We saw a maimed zebra and the skeletal remains of a sable antelope, with a snare around its horns. In one area, not only did we find the carcass of a recently executed elephant, we encountered skeletons of two other pachyderms that the scouts estimated were killed in the last couple of years. Three elephants slain in one area drove home the sobering reality for wildlife in this park. 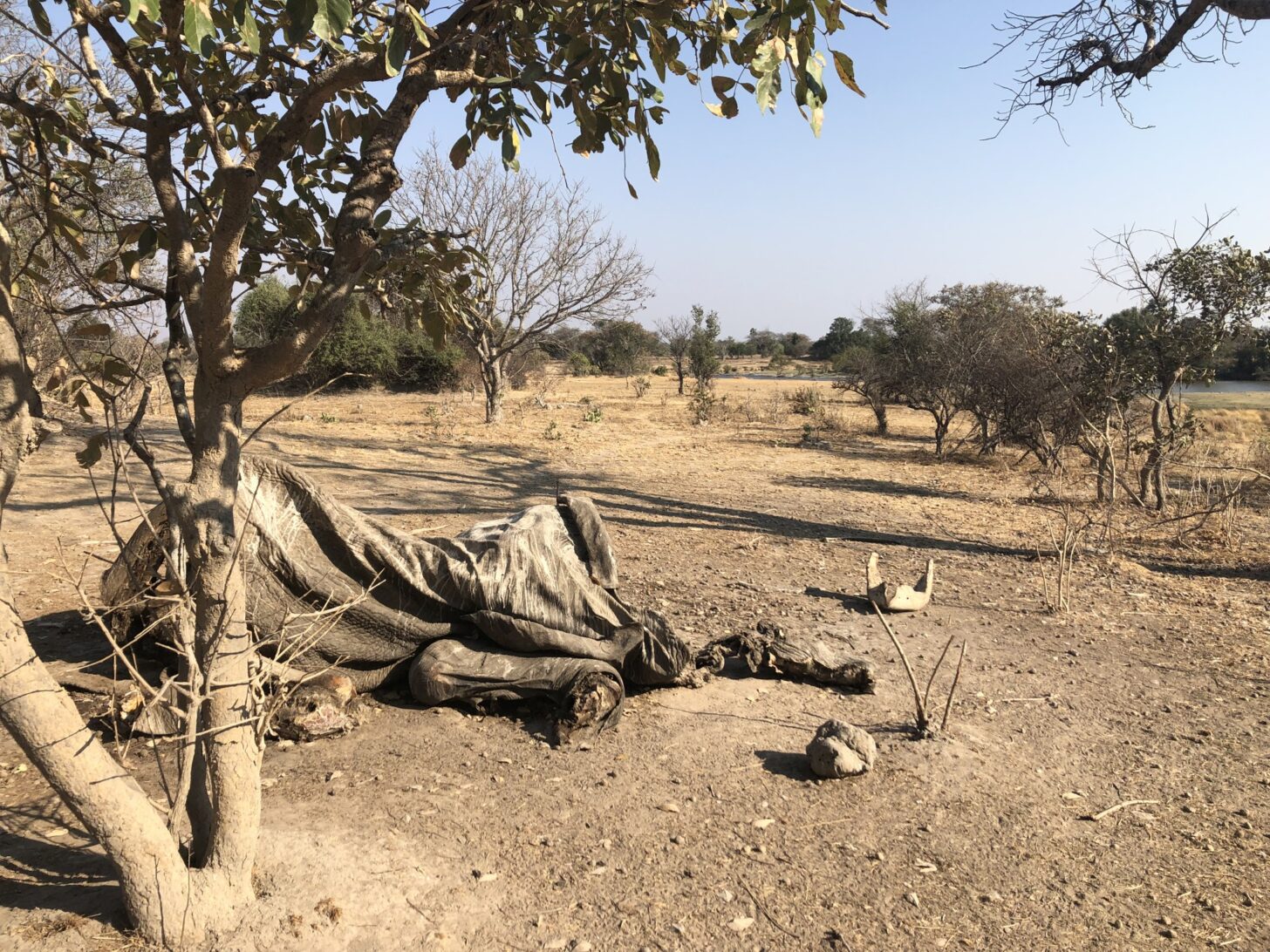 We saw signs of illegal activity throughout the trip. There were trees downed for honey harvesting, unoccupied poachers’ camps, bicycle tracks, and a broad, well-used foot-trail that originated beyond the park’s eastern boundary. According to Lipoko, people from more than 50 miles away walk or cycle along this poachers highway to unlawfully enter the park, hunt, and remove game. The Zambian government estimates that as many as 6,000 poachers operate around Kafue.

While passing through the anti-poaching base, an excited ranger led us to a massive python that had recently devoured a small animal, possibly a bushbuck. The snake, situated in thick bush close to the river, was resting safely by a downed tree digesting its food. Approaching quietly, we crept up on the python. It appeared to be at least 13 feet long and 10 inches wide. The engorged section was two to three times its normal size. 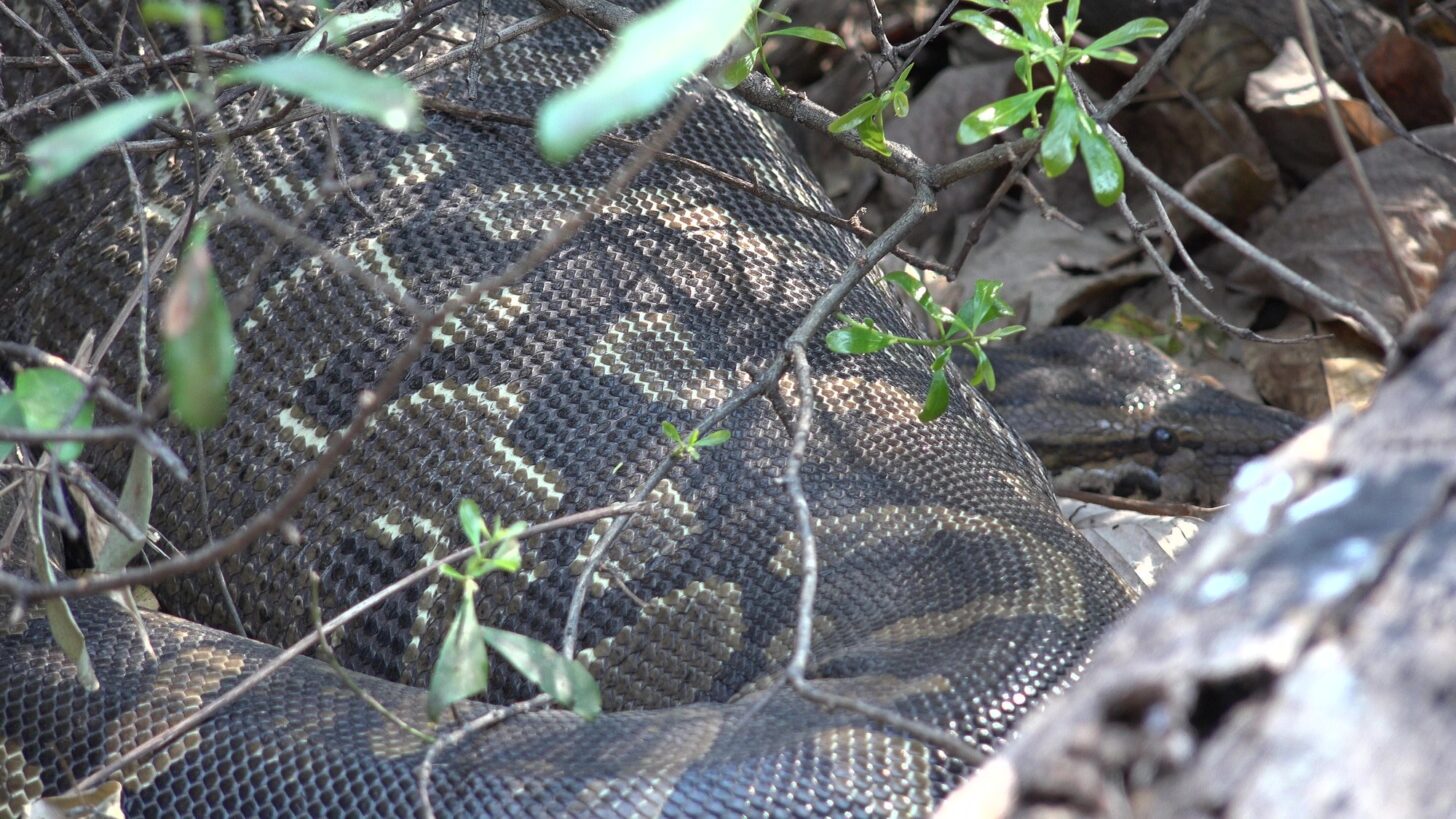 This python was busy digesting a large meal.

Leaving the full python, we headed north, entering the Special Conservation Zone, a scenic area of Kafue with extensive grasslands filled with puku and impala. Along oxbow lakes there were signs of elephant, buffalo, lion, and leopard. The animals could sense of our presence as far away as 500 yards and retreated swiftly, darting and leaping through the tall grasses and small shrubs, disappearing into the bush.

Continuing north along the Kafue and Lafupa rivers we came to the traditional community fishing weirs. These structures are a part of the original park agreement that allows communities to continue traditional fishing using a defined number of weirs. They are not much more than hand-made dams that span the river, constructed from small trees and grass thatch. Fish are caught by routing the water through a narrow hole in the dam’s center and then into hand-made baskets woven from riverine reeds. 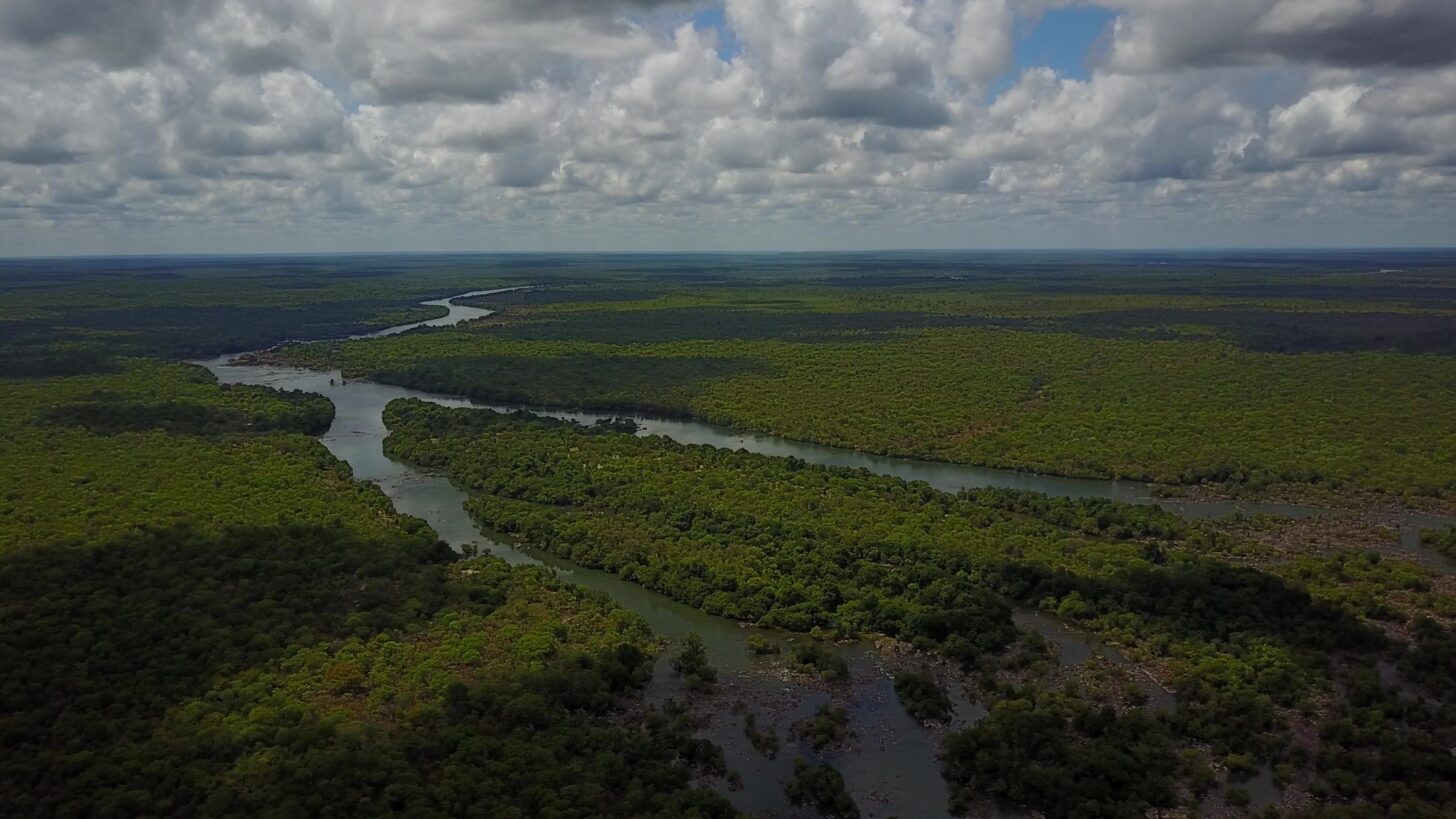 The Kafue river from above.

To reach our destination, we needed to cross the Lafupa without a bridge or boat to help. That left one option. Carefully, one person at a time, the team climbed onto a rickety weir, keeping a wary eye on a nearby raft of hippos, and on the black water below in case a crocodile waited for its next meal.

Testing the strength of hand and footholds, each of us inched across the frail structure until safely reaching the opposite shore. Awaiting us was Kafue’s jewel, the Busanga Plain. 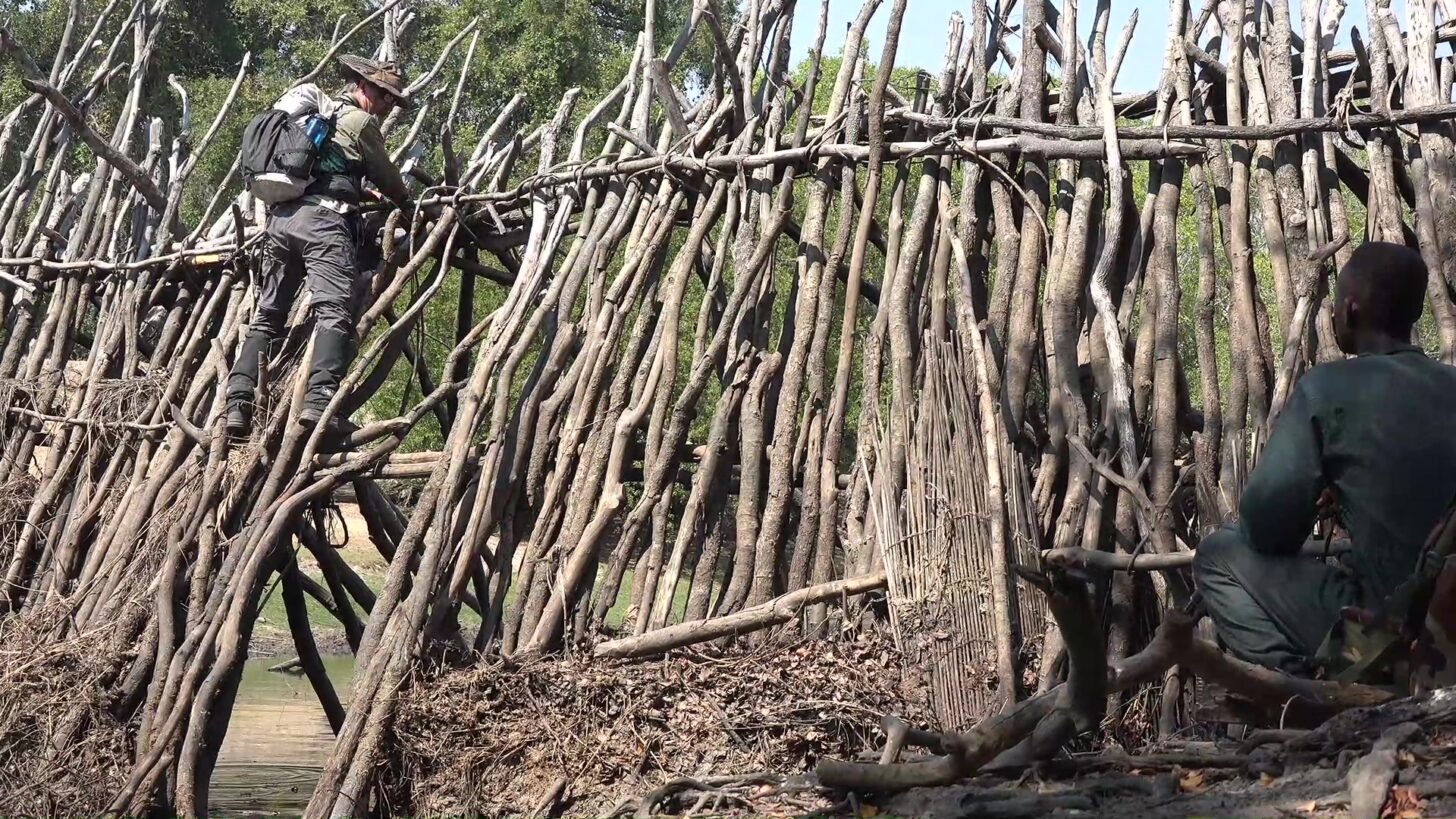 Crossing the river on a weir.

After a march along riverine forests filled with resting hippos, the Busanga Plain spilled out in front of us. Before dark, we found a camping spot near an old river channel next to a large termite mound. This comfortable location was near water and out of the surrounding tall grass. As we did each night, exhausted from the day’s hike, we laid out our sleeping bags and relaxed by the campfire, our defense against encroaching animals, and took in the southern hemisphere stars and constellations. Nearby a leopard coughed, elephants grumbled, and hippos splashed and called in their low staccato laugh.

Early the next morning, we woke to hyena whooping not 30 yards from our camp.

Late in the afternoon on the eighth day, we arrived at our destination in the Busanga Plains. Sore and weighing a few pounds less, we dropped our packs and enjoyed a cold drink to celebrate our accomplishment. We eyed each other in a mutual understanding of our shared achievement in crossing this African wilderness. 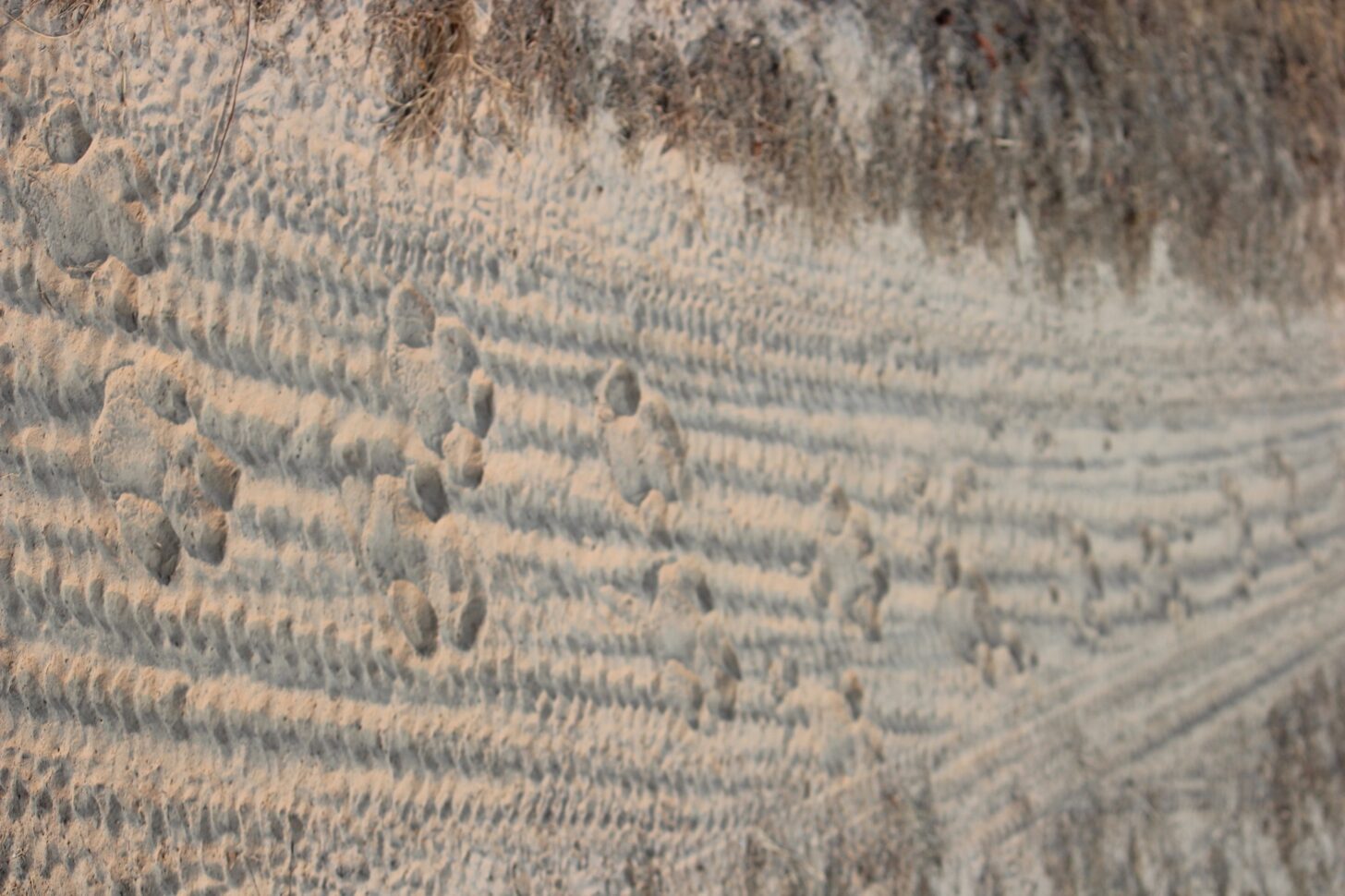 In today’s hyper-connected world it’s easy to imagine that we intimately know a place or feel that we’ve already been there just by following a friend’s photos on social media. However, after walking through the heart of nature, I was reminded that to truly experience life, you have live it. Disconnect, put your boots on and get acquainted with a place in person.

These awakening moments happen when you are soaked with sweat, feel the bite of the tsetse fly, and enjoy the refreshing coolness of the river on your feet after a long, hot day of hiking. The feeling comes too in your sleeping bag when the reassuring silence is broken by the distant roar of a lion.